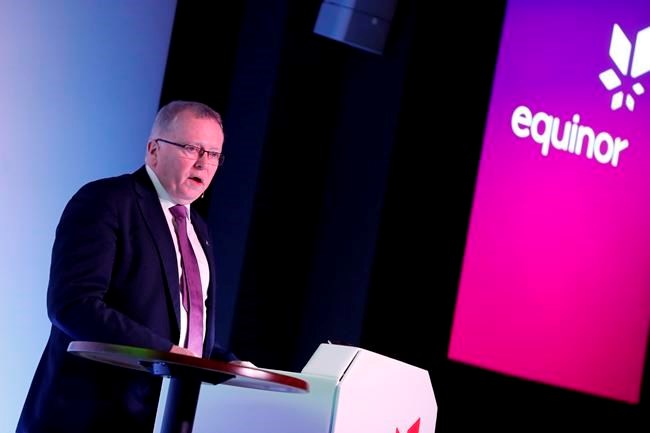 CALGARY — The Canadian arm of Norwegian oil giant Equinor ASA says it has closed its downtown Calgary office and is moving staff to St. John's, N.L., to better focus on offshore East Coast operations after selling its Alberta oilsands interests in 2017.

The Stavanger, Norway-based company, formerly known as Statoil, says the office consolidation will result in a reduction of about 30 per cent of its 120 Canadian staff in both St. John's and Calgary.

She says it will maintain a small downstream commodity marketing and trading business in Calgary.

Equinor sold its Leismer thermal oilsands project and its proposed Corner oilsands project to Calgary-based Athabasca Oil Corp. in 2017 for $435 million in cash plus 100 million Athabasca shares, along with up to $250 million more in contingent payments based on future oil prices.

Equinor is operator of seven discoveries offshore Newfoundland and has working interests in the Terra Nova, Hebron and Hibernia producing projects there.

"The decision to consolidate offices was made to improve organizational efficiencies in our Canadian business and align with our updated Canada business strategy," said Collins in an email.

"We took a decision to focus our activities on our offshore assets in the East Coast of Canada. Equinor ... will no longer evaluate business opportunities in the onshore energy industry in Canada."

This report by The Canadian Press was first published Jan. 13, 2021.

Companies in this story: (TSX:ATH)

Note to readers: This is a corrected story. An earlier version incorrectly stated the gender of Equinor spokeswoman Alex Collins.