PARIS (AP) — French riot police fired tear gas and used water cannons Saturday in Paris as protesters supporting Palestinians in the Gaza Strip defied a ban on marching in the French capital.
May 15, 2021 11:29 AM By: Canadian Press 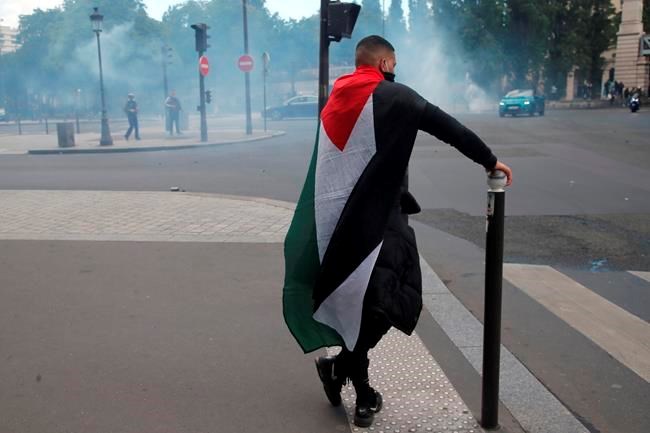 Hundreds of people marched peacefully in other cities in France and elsewhere in Europe.

In Paris, protesters scattered and played cat-and-mouse with security forces in the city's northern neighborhoods after their starting point for a planned march was blocked.

Paris police chief Didier Lallement had ordered 4,200 security forces into the streets and closed shops around the kick-off point for the march in a working-class neighborhood after an administrative court confirmed the ban due to fears of violence. Authorities noted that a banned July 2014 pro-Palestinian protest against an Israeli offensive in Gaza degenerated into violence and running battles with police to justify the order against Saturday’s march.

Organizers said they intended to “denounce the latest Israeli aggressions” and mark the fleeing of Palestinians after Israel declared independence in 1948.

“Stop Annexation. Palestine Will Vanquish,” read one poster in a small crowd facing off with police.

Protesters shifted from neighborhood to neighborhood as police closed in on them, sometimes with tear gas and water cannons. At one point, a fire set by protesters blocked a large street.

Anger against the Israeli offensive in Gaza drew protests elsewhere in Europe on Saturday, with thousands of people marching on the Israeli Embassy in London to protest Israel’s attacks. Those included an Israeli airstrike that blew up the 12-story building in Gaza that housed media outlets, including The Associated Press. Those inside were warned and fled the building.

Demonstrators chanting “Free Palestine!” marched through Hyde Park in London and gathered outside the embassy gates, watched by a large number of police. Organizers demanded that the British government stop its military and financial support to Israel.

Husam Zumlot, head of the Palestinian mission to the U.K., told the crowd that “this time is different.”

“This time we will not be denied any more. We are united. We have had enough of oppression,” he said.

In the Netherlands, a few hundred people in The Hague braved the cold and rain to listen to speeches and wave Palestinian flags. On a central square outside the Dutch national parliament building, protesters held up signs saying: “Free Palestine.”

On Friday evening, Dutch police briefly detained about 100 pro-Palestinian demonstrators in the city of Utrecht who refused to end a demonstration that was banned because participants were not adhering to social distancing.

In France, some of the dozen marches permitted in other cities drew huge pro-Palestinian crowds that marched peacefully Saturday, notably in Strasbourg in the east and Marseille on the Mediterranean Sea.

Demonstrations were also held in several cities in Germany while hundreds gathered peacefully in Rome.

In Berlin, police broke up a pro-Palestinian protest, citing participants’ failure to comply with coronavirus distancing rules. Stones and bottles were thrown as officers moved to clear participants, the dpa news agency reported.

Anti-Israel protests earlier in the week drew condemnation, particularly a protest outside a synagogue in Gelsenkirchen. A video showed dozens of protesters waving Palestinian and Turkish flags and yelling expletives about Jews. On Friday, Chancellor Angela Merkel’s spokesman, Steffen Seibert, said that “our democracy will not tolerate antisemitic demonstrations.”