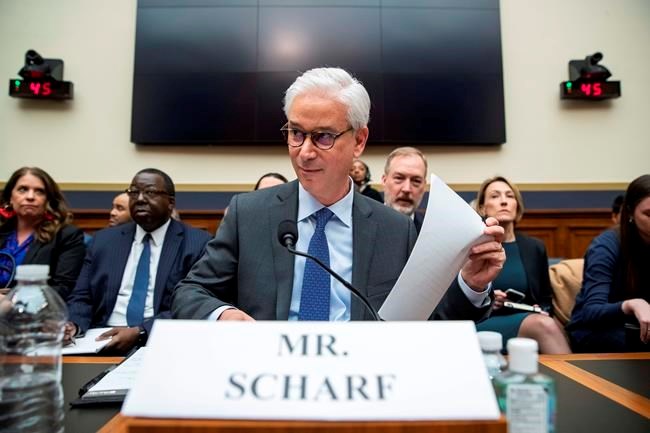 NEW YORK — Wells Fargo CEO Charles Scharf apologized Wednesday for comments he made suggesting it is difficult to find qualified Black executives in the financial industry.

Scharf said in a memo to employees “there is a very limited pool of Black talent to recruit from” in corporate America. The memo was written in June, but became public only this week.

The comments and similar statements made in a Zoom meeting, reported by Reuters, led to an intense backlash in Washington and on social media.

“Perhaps it is the CEO of Wells Fargo who lacks the talent to recruit Black workers,” said Rep. Alexandra Ocasio-Cortez of New York, on Twitter.

Scharf on Wednesday said in a prepared statement that his comments reflected "my own unconscious bias.”

“There is no question Wells Fargo has to make meaningful progress to increase diverse representation,” he wrote. San Francisco-based Wells has pledged to increase hiring of minority candidates, particularly through Black colleges and universities, as well as new anti-racism training programs at the bank.

Like much of the political and corporate world, the banking industry has had to face a reckoning in the wake of the death of George Floyd for its role in the racial and economic inequality that Black and other minorities face. Banks have announced changes to how they lend, and created new programs to spur economic development in communities of .

On Wednesday, Citigroup announced that it would direct $1 billion of the firm's capital toward closing the “racial wealth gap” in the United States. It would include $550 million in homeownership programs for communities of , and hundreds of millions toward Black-owned businesses and suppliers.

American banking is dominated by leadership that is largely white and male. None of the six big Wall Street banks have ever had a Black or female CEO. Citigroup two weeks ago announced it would promote a woman to CEO next year, the first on Wall Street to do so. Banks large and small are still regularly cited for discriminatory practices, including allegations of “redlining” Black homebuyers. Redlining is a practice in which banks deny or avoid providing credit services to consumers because of racial demographics or the where they live.

About 13% of named executives at financial services companies are a racial or ethnic minority, according to Institutional Shareholder Services.

The last prominent African American to serve as CEO at a large financial services company was Kenneth Chenault, the former CEO of American Express. He retired in 2018. In an interview with The Associated Press at the time, Chenault called the lack of a pipeline to recruit and retain diverse talent “embarrassing” to the financial services industry.

Stanley O'Neal, the former CEO of Merrill Lynch while it was still an independent company, is also Black. He resigned in 2007 during the firm's collapse.

U.S. government approves alliance between WestJet and Delta, with conditions
Oct 23, 2020 6:28 PM
China vows retaliation if US proceeds with Taiwan arms sale
Oct 23, 2020 6:08 PM
Comments
We welcome your feedback and encourage you to share your thoughts. We ask that you be respectful of others and their points of view, refrain from personal attacks and stay on topic. To learn about our commenting policies and how we moderate, please read our Community Guidelines.