OTTAWA — Canada detains thousands of asylum seekers every year in often-abusive conditions where people of colour appear to be held for longer periods, Human Rights Watch and Amnesty International said in a joint report Thursday.
Jun 17, 2021 5:03 PM By: Canadian Press 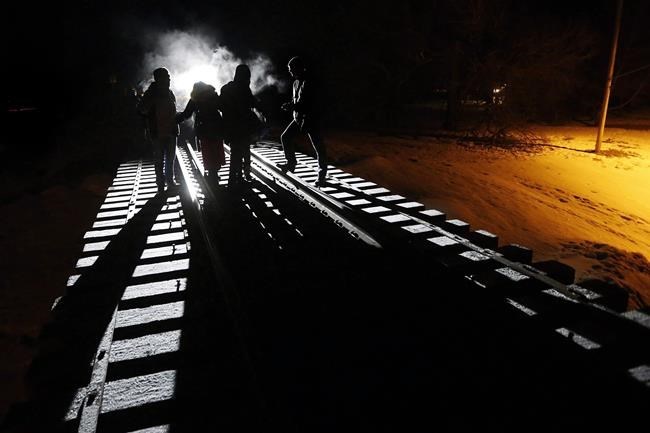 OTTAWA — Canada detains thousands of asylum seekers every year in often-abusive conditions where people of colour appear to be held for longer periods, Human Rights Watch and Amnesty International said in a joint report Thursday.

The two leading human rights organizations documented in their report how people in immigration detention, including those fleeing persecution and seeking protection in Canada, are regularly handcuffed, shackled and held with little to no contact with the outside world.

The secretary-general of Amnesty International Canada said the country’s abusive immigration detention system is in stark contrast to the rich diversity and the values of equality and justice that Canada is known for.

"There should be no circumstances under which anyone should be treated in a punitive manner for immigration-related business, or be detained in facilities that are used for criminal law enforcement," she said.

Canada Border Services Agency spokeswoman Judith Gadbois-St-Cyr said the agency is aware of the report and will review its findings and recommendations.

She said the CBSA is committed to upholding the Canadian Charter of Rights and Freedoms and to ensuring the dignified and humane treatment of all persons detained pursuant to immigration legislation.

"The CBSA’s application of its detention authorities is risk-based. Detention is a last resort and alternatives to detention are always considered," she said.

"The agency continually seeks to improve the well-being of its detainees and to provide a consistent standard of care across Canada."

Nivyabandi said Canada should sign and ratify the United Nations' Optional Protocol to the Convention against Torture to further prevent violations and open detention sites for international inspection.

She added Amnesty International and Human Rights Watch are calling on the Canadian authorities to end the inhumane treatment of people in the immigration and refugee protection system by gradually ending immigration detention in Canada.

People can be held for months or years on immigration-related grounds. Detainees who are from communities of colour, particularly Black detainees, appear to be held for longer periods, often in provincial jails, according to the report.

During the same period, 136 children were put in detention to avoid separating them from their detained parents, including 73 children under age six.

Human Rights Watch and Amnesty International found that Canada has held more than 300 immigration detainees for longer than a year since 2016.

Many asylum seekers are held in provincial jails with the regular jail population and are often subjected to solitary confinement, and those with psychosocial disabilities or mental health conditions experience discrimination, the report said.

Samer Muscati, associate disability rights director at Human Rights Watch, said Canada is one of the few countries in the global north where people seeking safety risk being locked up indefinitely.

Muscati said immigration authorities discriminate against people with disabilities by making the conditions of their detention harsher and the terms of their release more onerous than for many other detainees.

The two organizations found that many immigration detainees develop suicidal thoughts as they begin to lose hope that they will be released, and those fleeing traumatic experiences and persecution are particularly affected.

They said many former immigration detainees continue to live with the effects of psychosocial disabilities they developed during incarceration months and even years after their release.

The CBSA remains the only major law enforcement agency in Canada without independent civilian oversight, which repeatedly resulted in serious human rights violations in the context of immigration detention, the advocacy groups said.

“Since the start of the COVID-19 pandemic in March 2020, Canadian authorities have released immigration detainees at unprecedented rates,” Muscati said.

“Instead of returning to business as usual as the pandemic comes under control in Canada, the government has a real opportunity to overhaul its immigration and refugee protection system to prioritize mental health and human rights.”

This report was first published by The Canadian Press on June 17, 2021.

This story was produced with the financial assistance of the Facebook and Canadian Press News Fellowship.