Fall of the wall: Alberta government takes down plant installation early due to bugs

EDMONTON — The ivy and tropical plants spread across a living wall in the lobby of a landmark Alberta government building are being cut down earlier than planned because of a bug infestation.
Nov 24, 2020 8:00 PM By: Canadian Press 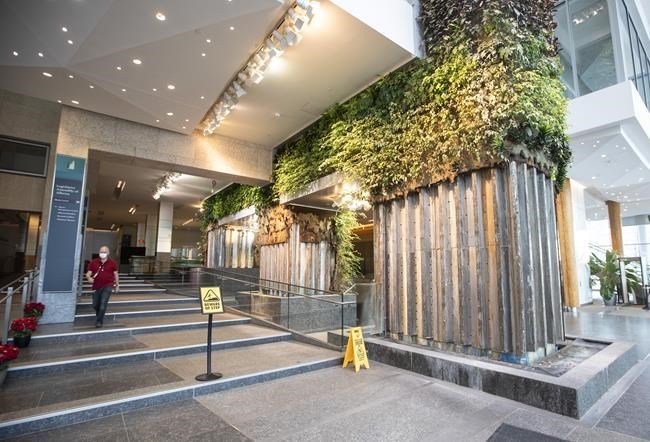 EDMONTON — The ivy and tropical plants spread across a living wall in the lobby of a landmark Alberta government building are being cut down earlier than planned because of a bug infestation.

The United Conservative government had intended to remove the 223-square-metre plant installation in the Edmonton Federal Building's lobby next year to save the annual $70,000 maintenance cost.

But the acting press secretary for Infrastructure Minister Tricia Velthuizen says a bug infestation was discovered recently, so it was decided to order the wall's immediate removal.

About half of the greenery was torn down Monday, exposing the metal space which used to collect the fresh air generated by the plants to send through the rest of the building.

Velthuizen said the living wall — which Hollywood actor Leonardo DiCaprio said he thought was cool when he visited Edmonton — was something nice that the province can no longer afford.

She said the wall will eventually be replaced with art from the provincial collection as part of upgrades to the building's heating, ventilation and air-conditioning system. Velthuizen did not say when the new system will be in place or how much it will cost.

The Edmonton Federal Building is just northeast of Alberta’s legislature. It was originally built by Canadian government to house its main federal offices in Western Canada. It underwent extensive renovations and, in 2015, more than 600 government staff and members of the legislature moved in.

The building made headlines years ago when a tony penthouse apartment was added to the renovation design for then-premier Alison Redford and her daughter. The suite became known as the "Sky Palace" in the ensuing controversy.

The company Nedlaw Living Walls Inc. installed the plants in 2014 and was hired to maintain the installation. Spokesman Adam Holder said the wall was built as part of building's heating, ventilation and air-conditioning system and provided fresh air.

He said he was disappointed to hear the decision to remove it and suggested maintenance costs could easily have been trimmed if the UCP government had asked.

"Before they rip the wall out, it would have been of paramount importance for them to know that they literally could have cut their $70,000 year maintenance bill by three-quarters," Holder said.

"It was extremely healthy, (and) if they were able to do quarterly maintenance on it (instead of monthly), that's where I get my 75 per cent from."

Holder added the UCP government may face more costs than it expected ripping out the wall.

"This is going to cost almost seven figures for them to not only rip it out, (but also to) redesign the space and re-engineer the air-handling system. This was literally connected to a lot of ductwork throughout the entire building, not to mention the rooftop units, and the actual air extraction system was designed with this wall," he said.

"So now it has to be recalibrated. And you may be in a situation where you have to buy new equipment, or re-engineer old equipment. It's certainly not just a matter of, you know, kind of ripping out a floor lamp and that's the end of it."

Jim Hole, son of former lieutenant-governor Lois Hole and the operator of a well-known greenhouse just north of Edmonton, said he understands why some people would be upset about the wall's removal.

"The downside is, of course, you lose the beautiful esthetics. You lose that nice humidity that comes from the plants. You do lose some filtration of air that may be a bit stale and some of the pollutants that occur indoors," Hole said.

Everybody, including Alberta's political leaders, should be around plants on a regular basis to become healthier mentally and emotionally, he said.

This report by The Canadian Press was first published Nov. 24, 2020.