VICTORIA — Premier John Horgan says he is excited by the prospect of Prince Harry and Meghan Markle calling British Columbia their part-time home.
0
Jan 14, 2020 9:37 AM By: Canadian Press 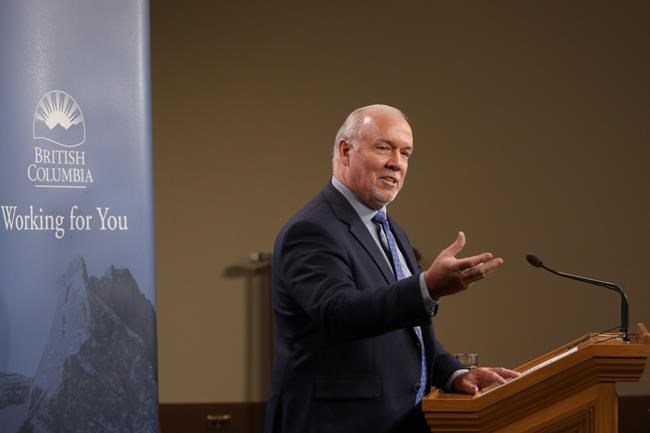 VICTORIA — Premier John Horgan says he is excited by the prospect of Prince Harry and Meghan Markle calling British Columbia their part-time home.

He had a light-hearted conversation about the couple with Prime Minister Justin Trudeau on Monday, he said during a news conference in Victoria.

"We're both kind of giddy about it. Canada is a cool place to be. We are all pretty happy about that as Canadians."

The Queen said Monday there will be a period of transition to sort things out on the couple's future roles as members of the Royal Family during which Meghan and Harry will spend time in both Canada and the United Kingdom.

"My family and I are entirely supportive of Harry and Meghan's desire to create a new life as a young family,'' the Queen said in a statement.

"Although we would have preferred them to remain full-time working members of the Royal Family, we respect and understand their wish to live a more independent life as a family while remaining a valued part of my family.''

The Duke and Duchess of Sussex spent the holidays at a secluded beachfront villa near Victoria, where they were seen exploring the community.

"And the fact that they felt comfortable here speaks to us as a society and that gives us a reason to pat ourselves on our back," Horgan said.

"That we are good and kind people who don't want to intrude in the lives of famous people. We're excited when we see them but leave them be."

He took "comfort" watching the response of residents of Vancouver Island who "bumped" into the family but largely left them alone, Horgan said.

"The paparazzi weren't here. You as a media group left them alone," he said.

"You talked to people who bumped into them on the trail and it was a curiosity and a bit of a delight for British Columbians to say, 'oh good, they came here because they felt safe.' "

He hasn't "given a lot of thought" to the costs of the family putting down roots in the province, if B.C. is where they choose to spend their time in Canada, he said.

"I'm sure there are people working on that right now," he said.

"And I may have more to say on that should the royals choose to put down roots in British Columbia."

The Prime Minister's Office wouldn't comment on potential costs of the couple living in Canada.

In Toronto, Finance Minister Bill Morneau said there had been no discussions about who would cover the couple's security costs.

Horgan joked he may be able to find some work for the couple, should the family choose to settle down in Victoria.

"I'm sure I could find something for Harry to do," he said with a smile.

"The film industry is booming in British Columbia so I'm sure Meghan could get on with ... maybe Riverdale — who knows," Horgan said with a laugh. "She'd be good."

This report by The Canadian Press was first published Jan. 13, 2020.

Personal spending a party matter, Conservative Leader Andrew Scheer says
Jan 25, 2020 3:27 PM
Comments
We welcome your feedback and encourage you to share your thoughts on this story. We ask that you be respectful of others and their points of view, refrain from personal attacks and stay on topic. To learn about our commenting policies and how we moderate, please read our Community Guidelines.