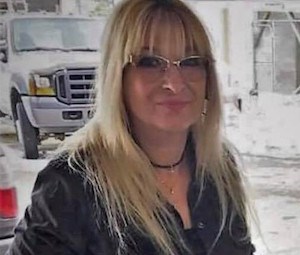 Died on Thursday April 26, 2018 at the Georgian Bay General Hospital, Midland in the loving company of her husband, Martin, and their daughters, Tara and Leila.  Beautiful, generous, kind, intelligent, thoughtful and fun, she was taken from her family and friends far too soon and far too quickly by an aggressive and advanced cancer.  Born in Toronto on June 23, 1964 she is the daughter of the late Miron Roman and his wife Zuzanna (Longosz) Roman.  She grew up in Parkdale with her family where she was an active member of the Polish community going to Polish school and taking Polish dancing lessons.   She retained pride in her Polish heritage throughout her life.  The eldest of four girls, she was often responsible for their care but was frequently their leader in merriment and mischief reveling in such exploits as walking along the roofs of the garages behind the homes on Garden Avenue. After graduation, Urszula entered college studying communications but the lure of independence took her to the working world. Challenging a suggestion made to her that she settle down with a good man who would provide a nice home for her she doubled her hard work and became a proud home owner before she was 21.  On September 2, 1989 she married Martin because he was, she said, the smartest person she had ever met.  She was a perfect partner for him in love and life, in escapades and endeavours.  She advised, shared in decision making and worked along side him as they ran hot dog carts, a restaurant, The Back Alley Café, and eventually built their roofing business where she handled the administrative side.  Urszula could turn her hand to anything with success – replacing heritage roofing tiles, repairing broken glass in a window, doing a week-end bathroom reno, making presentations to municipal politicians.  She was proud mom to Tara and Leila.  From her they learned the many mother-daughter things – make-up and clothes, dating and careers, and especially they learned kindness and self-sacrificing love.  Time with Martin and their daughters was a priority– on the boat, at the zoo, dirt biking and traveling including vacations in Poland and Paris and the Caribbean.   Ursuzla loved her extended family.  She liked to gather everyone for holiday dinners with turkey and all the trimmings.  Although she was quite comfortable being a “not from scratch” person, her meals were delicious and delightful.  A highlight for everyone was travel to Martin’s home in New Brunswick for Christmas every other year with visits in between.  She had a magical way with animals and birds - both pets and the wild varieties.  Birds would eat from her hand and she oversaw a menagerie of ferrets, chinchilla, dogs, and feral cats who became best buddies.  She was a fearless adventure seeker.  She skied and snowmobiled and was an enthusiastic motor biker particularly enjoying outings with the “Hardly Angels”.  Ursula and Martin were regulars at concerts featuring entertainers old and new.  Urszula loved entertaining friends on pool night.  She had a flair for fashion, excellent taste and a striking appearance.  Shoes and boots were particular indulgences and she was not a stranger to bling.  She was a frequent correspondent – always sending thank you letters and keeping-in-touch notes – handwritten on cards of her own creation.  Urszula was outgoing and friendly and had a genuine fondness for people.  She always had a smile, a compliment, a question, or a comment for friends and strangers she met in the course of the day.  Even during her illness she continued to show concern for others and regretted the sadness she was causing them.  If she had a fault (and it was a self-declared one) it is that she wanted to have everyone happy and to cause no difficulties.  She had the nicest and most effective way of letting you know when she didn’t agree with you, saying your name and then “you know” and then expressing in a calm and kindly way her thoughts.  As well as her husband and daughters and mother, Urszula is survived by her sisters, Diana Roman, Orillia, Margaret Roman (Jamie Gibson), Toronto, and Joanna Roman (Chris Manley) Toronto; niece Ayla and grand nephew, Darcy, and nephews Austin and Eden; mother in law Marion Beyea; sisters in law Kari Dunfield (Dwight), Robin Beyea (Aleks Askanas), and Sarah Beyea (Brad Kelly) and niece and nephews in law, Alexandra and Erik Dunfield and Liam Kelly; father in law, Harold Beyea; and a number of aunts and uncles and cousins in Poland.  Urszula believed in a tolerant and compassionate God.  She was herself tolerant and compassionate – never a gossip, never mean spirited.  There are many things we will never forget about Urszula.  For sure we will remember her signature happy face and saucy “So there.”   The family will honour her life with a visitation at the COLDWATER FUNERAL HOME, Coldwater on Sunday from 2-4 & 7-9pm.  Mass of Christian Burial will be held at St. John’s R.C. Church, Waubaushene on Monday April 30th at 11am.  Cremation to follow.  As an expression of sympathy donations in memory of Urszula may be made to the Coldwater Lions Club or to the RVH “Simcoe Muskoka Regional Cancer Centre”.

Friends are invited to send condolences to the family at www.coldwaterfuneralhome.com.