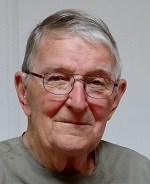 (April 22, 1931 - January 29, 2019) - It is with great sadness that we announce the death of Dr. David Downham at his home in Orillia, with his wife Cathy beside him. David, the son of Dr. Kenneth Downham and Phyllis Worsley  Downham (Corrie), was born in Rock Ferry, Birkenhead, UK.  He attended Bryanston School and received a scholarship to attend Peter House, Cambridge, where he received his Bachelor of Medicine. Soon he was to do his National Service in Northern Ireland and Yorkshire. He then taught Anatomy at St. Bartholomew’s Hospital, London, and continued there, earning a Fellowship in General Surgery. He married his much loved and always missed Jennifer Eileen Curtis (deceased 1979) and they had two sons, dearest Christopher (deceased 2007) and Nicholas. In 1966 the family came to London, Ontario, Canada where David attained his second Fellowship in Urology. In 1974, with urging from friends in Orillia, David opened the Orillia and District first Urology Service. David married Catherine Louise Downham (nee Neelands) in 1980. Retiring after 25 years of practice, David did urology locums in Invercargill, New Zealand, and in Hobart, Tazmania, Australia.

While in Bangkok on the way home from the southern hemisphere, a journalist friend, Heather Kelly, introduced Cathy and David to Dr. Cynthia Maung at the Mae Tao Clinic on the Thai/Burma Border. She is an ethnic Karen who fled the brutal uprising in Burma in 1988. This encounter led to a new career and a charitable pursuit which was named Project Umbrella Burma (PUB). David taught surgery to ethnic medics at the Clinic for six months each year for ten years. He and Cathy, with Saw Kshakalu, founded and continue to support the Kaw Tha Blay College for Ethnic Karen students from Burma/Myanmar.

David was an avid reader who possessed an endless intellectual curiosity. His kind, caring and gentle ways touched the hearts of everyone who came to know him. David was greatly loved and will be sorely missed by his family and his friends on both sides of the world.

Cremation has taken place. Arrangements entrusted to the Mundell Funeral Home, 79 West St. N., Orillia (705-325-2231). A time to remember David will be held at the Orillia Museum of Art and History on Sunday, February 10 from 1:00 to 4:00 p.m. with remarks at 2:15 p.m. In lieu of flowers, donations to Project Umbrella Burma www.projectumbrellaburma.com would be greatly appreciated.

‘Death be not proud, though some have called thee mighty and dreadful, for thou art not so.’