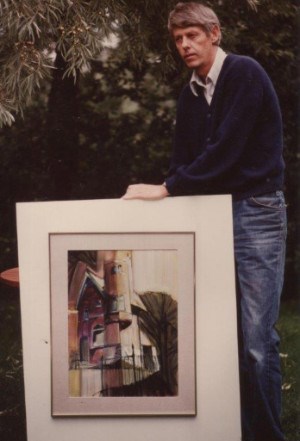 At the Orillia Soldiers' Memorial Hospital, beloved husband of 64 years of  Frances (nee Moon).  Loving father of Peggy  (Dale Whitney), Cindy (Donald Munro). He is pre-deceased by his son Jeffry and his brother Richard. Born in Toronto, Phil attended Western Technical School.  Throughout his life he was always seeking ways to express himself through various creative pursuits.  As a young man he was a member of The Three Reeds, a harmonica trio.  Their musical comedy act played in many venues in the UK.  Returning to Ontario, he pursued a career in commercial art and advertising.   His many paintings were shown and sold in galleries throughout Ontario.  Phil also developed a comic strip called Leonardo which was published in the Toronto Star and the Montreal Star.  At other times he put his mind to writing science fiction and creating children's books.  He was always a keen snooker player.  Whenever Phil spoke of his demise he always said he'd be going to that great poolroom in the sky.  In later life he developed a love of keyboards and played tunes for seniors at several care facilities.

Cremation has taken place.  The family plans a celebration of Phil's life at a later date.  If desired, memorial donations to Parkinson Canada or the Humane Society International would be appreciated.

Memories and Condolences
We welcome your feedback and encourage you to share your thoughts on this story. We ask that you be respectful of others and their points of view, refrain from personal attacks and stay on topic. To learn about our commenting policies and how we moderate, please read our Community Guidelines.