Amid the season's melancholy, birds inject life into the woods

Redwings, grackles and rusty blackbirds are on migration and, like the army, they travel best on a full stomach, outdoors columnist explains
Nov 15, 2020 11:50 AM By: David Hawke 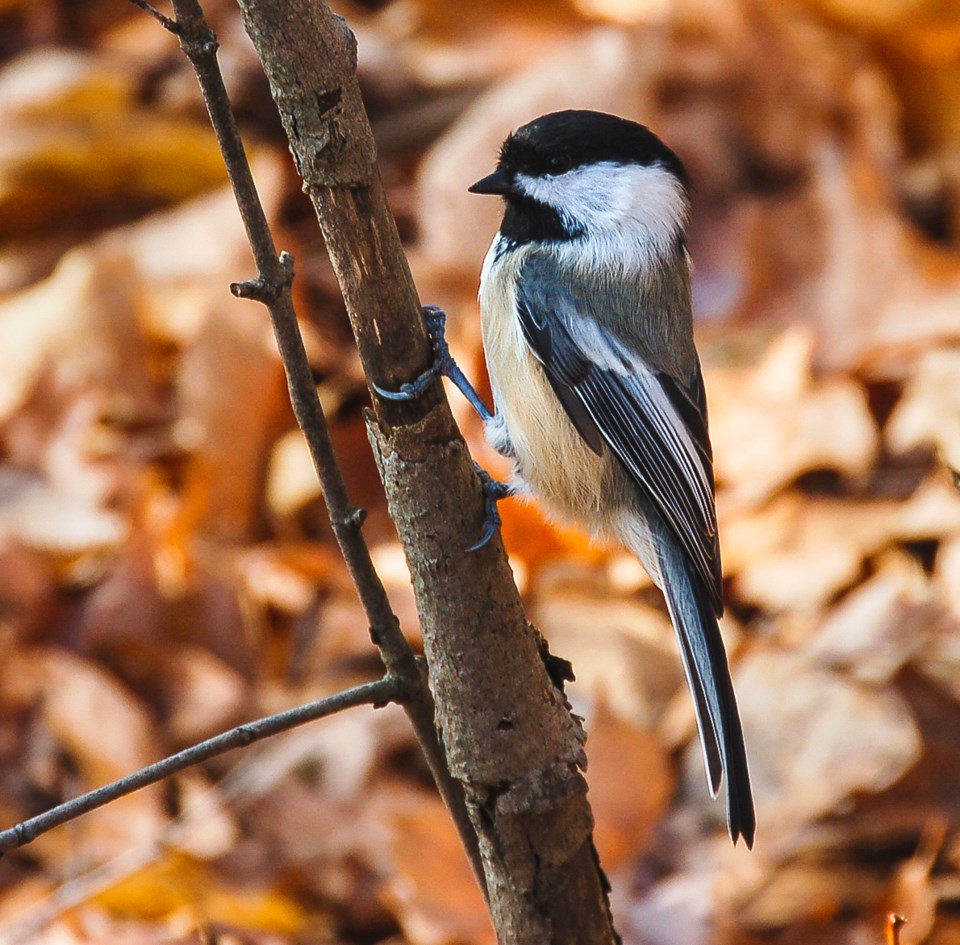 This black-capped chickadee is a common little woodland imp and among the birds that animate an otherwise, seemingly lifeless forest. David Hawke/OrilliaMatters

This month feels so much like a recently completed festival - coloured leaves are gone, wildflowers have been frost killed, Thanksgiving and Halloween are over, Indian summer has come and gone, and most of the birds, mammals and insects have either migrated or are hibernating.

Nothing left but memories.

Soon there will be layers of white snow and the countryside will appear beautiful once again in its winter apparel. And there will be Christmas and New Year's Eve to get excited about… but those things seem so far away right now, for now it is November.

Even the wind sounds different nowadays, more harsh, less muted, colder and with a message we aren't ready to hear - that winter is coming. Branches, all of which look dead, click together like dried bones and send shivers through me.

With these thoughts preoccupying my mind, I rather reluctantly took a wander through our Two-Acre Woods, which consists of now barren looking maple and beech trees.

Tree sparrows and song sparrows are observed, picking through the layers of leafy debris, searching for something to eat, anything of use. Their dull colours of rust brown and soft grey match that of the decomposing leaves. Their movements are furtive, like scavengers or looters not wishing to be seen.

Part way up the slope of the trail is a medium-sized granite boulder, left behind by some retreating glacier. Despite its cold and battleship-gray appearance it does provide a resting spot, a place to ‘park it’ for moment.

I settle there for a moment, walking stick leaning against my shoulder. My gaze takes in the lifeless woods.

As if to add to the melancholy of the moment, a small flock of crows swoop in to perch, see me, and continue to the far end of the woods. Strange that there are only a few, as for the past few weeks these trees have been a refuge to upwards of 100 of these noisy vagabonds.

They would settle in each night, cawing and croaking, roosting on the outstretched arms of the ancient beech and maples. Now that the leaves are down the crows don't come round anymore, except for this rag-tag band, but now they are gone too, carried off by the chilling breeze.

As I try to muster the gumption to rise from the cold rock, a dazzling flash of colour enters the woods. Actually, two dazzlers, as a pair of blue jays are darting about the low growth, their bright blue plumage being in wonderful contrast to the dull, wet bark of the trees.

There is something very "Ontario" about seeing blue jays in a winter grey hardwood forest, a sense captured well by wildlife artist Robert Bateman in his painting of such a scene.

Although I'm starting to get a serious case of numb-bum from sitting on this rather solid rock, I hesitate to move as a distant clamour is detected. The noise, although soft and far off, is increasing in volume and heading this way.

Suddenly they are overhead, dozens, hundreds, and then thousands of blackbirds! The flock stretches back to the distant horizon, a string of black dots, flowing as if caught in an invisible current, swaying, undulating, but ever moving in a common direction.

Redwings, grackles and rusty blackbirds are on migration and, like the army, they travel best on a full stomach. A group of several hundred grackles descend into the woods, dropping like black leaves to the forest floor.

They form up shoulder-to-shoulder and advance as a line through the curled, dead leaves, turning each leaf over in search of slugs, caterpillars and other morsels.

As the rear birds tire of not finding anything, they fly ahead of the front line and begin their own search. The flock moves like a rolling wave, their combined voices like clinking machinery, scouring the Two-Acre Woods, picking it clean.

When I finally do move, the birds freeze in position. I move again, and they rise with a whoosh, throwing grackle insults at me over their wings. Even before I fully stand and get the circulation flowing in my legs again, they have landed in the neighbour's woodlot, continuing their search for avian fuel.

Just a bit farther down the leaf-obscured trail a lone chickadee peers under a maple branch, finds nothing, and scolds me for spite. Tough nuggets to you, I think, you'll be raiding the feeder all winter, a little workout now won't do you any harm. I leave him to his business.

The nasty little breeze has now brought with it a few icy raindrops, so I scuttle to the shelter of my home, leaving the 'lifeless' woods behind.