COLUMN: Milkweed, once a threat, is now loved and encouraged

If you take a walk through a milkweed patch, you will quickly discover it is abuzz with life, says outdoors columnist
Jul 18, 2021 11:30 AM By: David Hawke 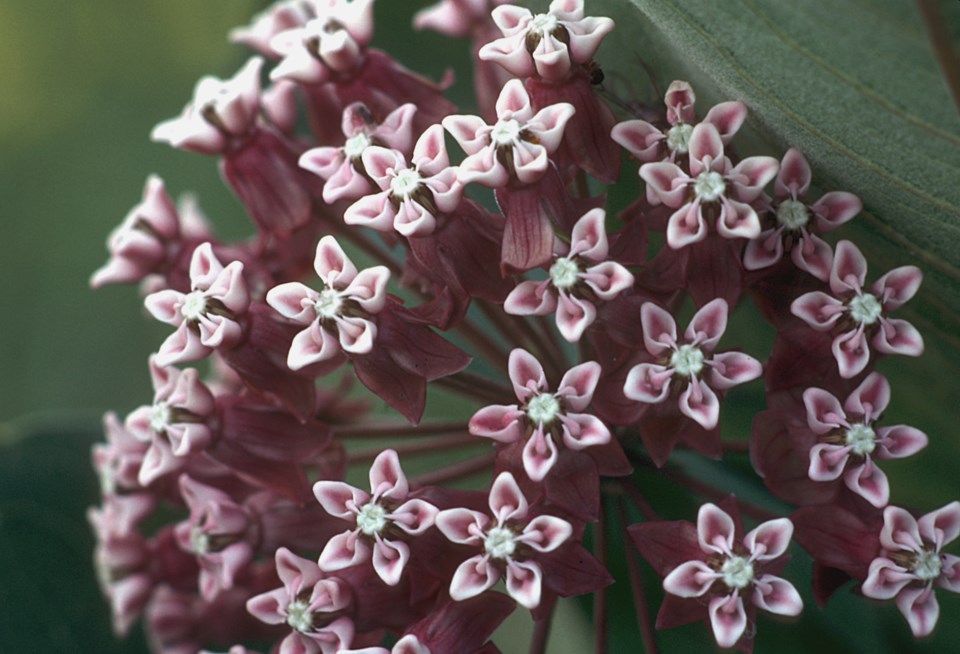 It’s always interesting to look at the love-hate relationships we have with certain species of wildlife; yesterday’s enemy ‘suddenly’ becomes today’s poster child of environmental goodness.

A somewhat recent example is the common milkweed, that wildflower that’s currently in full glorious bloom across our countryside.

There was a time, not so long ago, that these plants were listed on the Ontario Noxious Weed Act and it was illegal to have them growing on your property, especially if the seeds were able to float over the fence and land in agricultural lands. Made sense, in a small way, as milkweeds can spread fairly quickly, have a deep root system and cattle won’t eat the bitter-tasting mature plants, which reduced available pasture area.

When the monarch butterfly became a threatened species both nationally and provincially, our take on milkweeds shifted from cattle grazing to butterfly production. It took a lot of lobbying to have milkweed delisted, but today you can enjoy this plant in your butterfly garden without fear of the weed inspector dropping by for a chat.

This large and unmistakable wildflower is but one within the plant world labelled Asclepiadaceae (pronounced as-CLEP-ee-ah-DACE-ee-ah, and yes, you may use this for vocal warm-ups).

This family is named after Asclepius, the God of Medicine, as milkweeds have indeed been used as medicine on several continents and for several centuries, being applied to patients to relieve them of such maladies as gallstones and as a laxative.

While there are reported to be over 2,000 species of milkweeds worldwide, here in southern Ontario we have just over a dozen that grow here. Locally, you can often find common milkweed, butterfly weed, swamp milkweed and, the black sheep of the Asclepiadaceae Family, dog-strangling vine.

A quick scan of material written about milkweed will reveal oodles of info. Much of what I’m sharing here has come from a book published in 1976 entitled The Milkweed and Its World of Animals written by Ada and Frank Graham (which I picked off a library discard table in 1977; their loss, my gain).

They discuss a project where a scientist/researcher injected trace amounts of a radio-active element into milkweeds to track the movement of energy through food chains. A slit was made in the stems and a syringe was used to inject this tracer into the plant sap. Wherever the sap flows, the tracer would reveal its travels.

Several really interesting results were discovered. One was that that the tracer showed up in the flowers of nearby milkweed plants that had not been injected. This led to the discovery that the root system of one milkweed plant is entwined and integrated with the root systems of other milkweed, and that they share sap and nutrients, one plant to another.

Another discovery was that plant-eating insects also ingested and carried the tracer, with the amount of tracer indicating whether the insect ate mainly milkweed or just sampled it.

Further, the tracer was found in spiders and other insect-eating insects, proving the energy flow that exists from soil to top predator. Which drives home the concept that if we remove or damage the base sources (soil, plants) the whole energy system (read ‘life’) collapses.

A walk through a milkweed patch can quickly show you the diversity of life that thrives in this plant community. Butterflies, beetles, bugs, spiders, grasshoppers, moths and more can be easily observed. A milkweed colony is simply abuzz with life.

Have you ever noticed that while a plant may sport dozens and dozens of flowers, there are usually only one or two pods that will form by autumn? This is because milkweed flowers are very tricky structures from which to pick up pollen and then deposit it into another flower.

Take a close look at a milkweed flower and you will see that it is shiny, hard and slippery. It is also divided into five parts that are hinged and can be spread apart. Within this flower is a good supply of very sweet nectar that is an attractant to just about anything flying or crawling by.

When a bee lands on the flower its footing slips a bit but it really, really wants some of the nectar. So it’s feet (all six of them) vie for a toe-hold to remain in position.

As the feet slip up and down the surface they may push the flower apart and open a chasm (okay, a tiny slit) that reveals the pollen cluster. A foot drops in and the pollen bag hooks on. As the bee lifts its foot out in its continuing scramble to stay in place, the pollen comes with it.

Now the tricky part: that same bee has to go to another milkweed blossom and again slip-and-slide to hold position to get even more nectar.

This second process will, hopefully, see that same foot with the pollen bag slip inside this flower and, just like that, pollen transfer takes place and the flower can begin seed production. Like the lottery, not every floral visit results in a win, so only a few blossoms actually produce seed pods.

The resulting pods are quite edible for humans, according to many who have tried them. Some records tell of the Indigenous peoples collecting them for food and even growing milkweeds to harvest for food and medicine.

Today, the pods of milkweed are collected by only a few folks, with the newly formed pods cooked like broccoli.

The plant’s namesake, the milky white sap, contains latex and has been used as a glue. The silky plumes of the seeds are hollow and wax-coated and have been used as emergency lining in life preservers during World War Two.

Quite the amazing plant, yet once considered a threat to our agricultural livelihood. Nowadays there seems to be a reconsideration of its value and an acceptance that this native species has both a right and a role in our ecology.