Cute and playful? Not this otter! He was more interested in 'sprainting'

Otter has unique way of marking his territory, discovers outdoors columnist
0
Mar 31, 2019 11:30 AM By: David Hawke 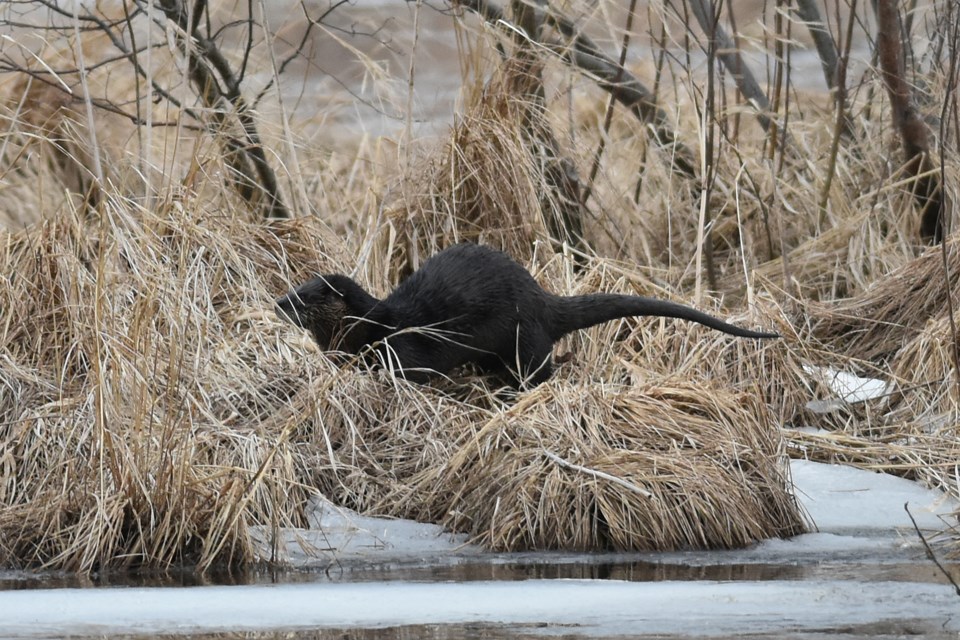 David Hawke finally got up close and personal with an otter. The experience was not what he imagined. David Hawke for OrilliaMatters

I have a challenge with otters.

It is a species that I always look for whenever paddling a waterway or poking around the edge of a marsh, always hoping to capture a few pictures of these beautiful animals.

Most of my photographer friends have had great opportunities to have otters pop up right in front of them, making for gorgeous full-frame images. But alas, otters seem to know of my presence and make themselves quite scarce.

One of the tricky things about chasing otters (to get a photograph) is that they have a rather large home territory, sometimes 10 km from side to side.

So if fresh tracks are found or someone reports an otter that "came right up beside my canoe", it may be seven to 10 days before the animal loops back through that part its territory. So it's pretty much hit-or-miss to encounter one.

Now that you know of my personal tale of woe in trying to photograph otters, I'm sure that you will share my elation knowing that yesterday I was in the right place at the right time.

While driving down a quiet backroad, going over an old concrete bridge that straddles a fairly wide creek, I glanced sideways (looking for ducks) and an otter was seen swimming in the current!

It's a honed skill that nature photographers acquire – pulling over to the side of a road with no shoulders, opening the camera bag and pulling out the telephoto lens while simultaneously not taking your eyes off the quarry. Did it.

Many folks will tell you tales of how otters like to play, cavorting about the shrubs, sliding down snow banks or muddy stream banks, spinning and corkscrewing within the water.

This one did none of that. This one looked very business-like, very measured in its activities. It climbed up on the grassy bank, looked about as if searching for something, back into the water for a few metres, then up and out again, repeating this pattern for a good stretch of the stream.

As my finger kept tapping the camera shutter, I was almost shaking with excitement as the lighting was good, my field of view was excellent, the animal was presenting itself in clear view, and most of the dials on the camera were actually on the right setting. Way cool. But what was this animal doing?

Through the magnified view of the lens I could see that it was performing a little dance, doing a bit of a tail shake accompanied by body undulations – same thing each time it came out of the water. Perhaps it was marking its boundary, like a cat spraying or a beaver making scent mounds?

Later, as the images were viewed on the computer screen, a detail became obvious – it was pooping, vigourously so, on each of the streambank stops. Crap... my super special opportunity to photograph an otter... and I get one that just poops a lot. Sigh.

But then I did some research about otters and discovered that otters do something that English biologists call "sprainting" (don't you just love those old European terms?).

Sprainting is the act of defining a territory by depositing scented feces along the border. Oh really? Well hey, I now have some great images of an otter sprainting, should you have need for such a framed photograph to adorn your living room wall.

Skunks and otters are biological cousins, both coming equipped with scent glands packed around the anus. While skunk spray is well known as a defence option, otter scent, which is apparently the same odour as fresh cut hay, is left as a message board. Not so much as a 'No Trespassing' sign, but rather as a notice of occupation.

A visiting otter will know that the immediate area is being hunted and it would be best to move along as food is hard to come by and additional competition right here, right now would not be appreciated. Otters with overlapping territories are polite and respectful in this manner.

The food that they seek ranges from crayfish to actual fish to most anything they can catch. Otter scats (not the sprainting kind, the real kind) can reveal a multitude of fish bones, shells and other aquatic prey. Occasionally a beaver may be taken.

A beaver? Yes, but not a big one, just the little kits. Beavers live in hollow lodges within the cattails or along the swampy shores of a lake. To enter the lodge requires the beaver to dive deep and come in through an underwater entrance tunnel. Good protection for the spring born kits, not a barrier for an otter.

As the melt water seeps and flows into our local lakes, the ice cover is softening and flowing away, revealing easy access to the deeper waters.

Ducks, geese, swans, mergansers and even eagles are drawn to these refreshing openings to search for aquatic growth or dead fish. If you see such a gathering at the edge of an ice flow, take the time to look also for an otter cavorting in the warmth of the springtime sun.

They are out there, so I'm told. You just have to be in the right place at the right time to make the connection.

Pesky moles are nature's perfect tunneling machine
May 17, 2020 11:15 AM
Comments
We welcome your feedback and encourage you to share your thoughts. We ask that you be respectful of others and their points of view, refrain from personal attacks and stay on topic. To learn about our commenting policies and how we moderate, please read our Community Guidelines.