Courting males boldy claim ownership of every nesting cavity within its boundaries - even if it means dispatching the current tenants
Jun 6, 2021 11:30 AM By: David Hawke 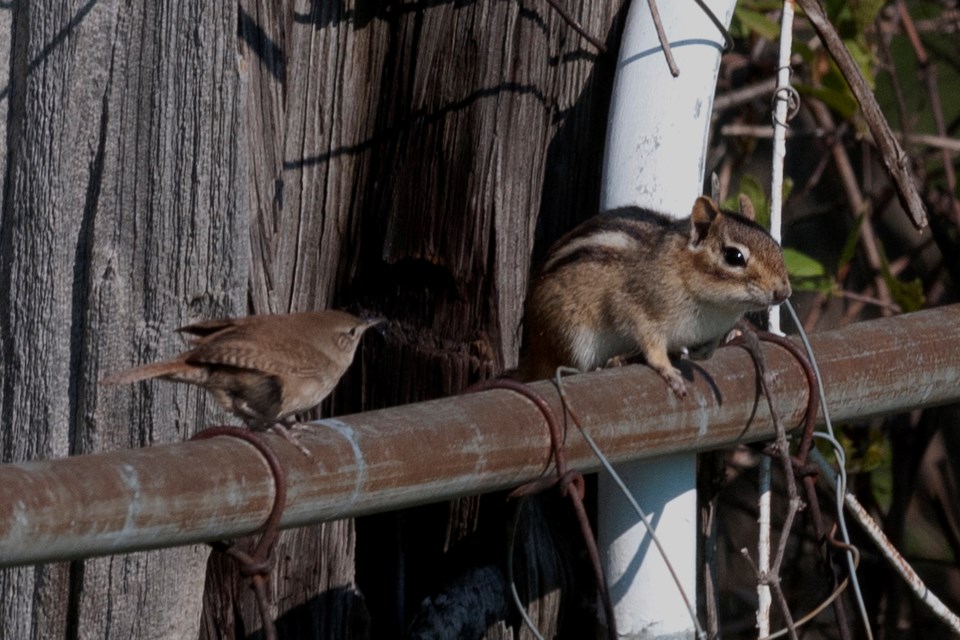 This wren gives the evil eye to a chipmunk as it fearlessly stakes out its territory.David Hawke/OrilliaMatters

With all the media attention these days seeming to be centered around murder, mayhem, family strife and other crises of the day, I feel a little left out of the journalistic mainstream with this nature column.

So I bring you a story of the Troglodyte family, consisting of a sweet charmer of a husband who murders to please his wife, and a wife who is so demanding that her husband has to build house after house until her satisfaction is met.

These diabolical characters are none other than -- house wrens! (These birds are scientifically known as Troglodytes… and are not to be confused with the 1972 Caveman song by the band known as the Jimmy Castor Bunch.)

I first noticed the little wrens years ago as I walked farm lanes in search of tardy Holstein cows. As the dust swirled out from under my boots, the heavy, hot air would be punctuated by the nearby chattering of wrens.

They were hard to see as they went about their business amidst the tangle of wildflowers and brambles that had woven their stalks up through the ancient pine stump fence. However, whenever I did catch a glimpse of one it almost always had a caterpillar or bug held in its beak.

Now let's snap ahead a couple of decades in time. We had put up some nest boxes for bluebirds around our garden, and within a week several of the new boxes had bluebirds moving in to them.

What a joy to see these marvelously coloured birds settle into the neighbourhood. Their quiet warbling call was most pleasant to hear as we did our yard chores.

After a few weeks, we conducted a round of inspections of the boxes to see how the birds were doing in regards to producing eggs and young. That's when we realized that something was wrong, seriously wrong.

The bluebird's eggs had been chipped open in several nests, and in one box the young had all been killed by blows to their heads! Another box was so stuffed full of coarse twigs that nothing larger than a fly could enter it. All this was, at the time, very strange.

By chance I had read a book about bird behaviours and came upon a passage about the wren's courtship rituals. The males sing gloriously and continuously while claiming their small kingdom, and claim ownership of every nesting cavity within its boundaries, even if it means dispatching the current tenants!

Their scientific name, Troglodytes, means “cave dwellers” or “one who lives in holes.” Seems appropriate.

Apparently several of these nesting cavities are prepared for Queen Jenny Wren's inspection. After her guided tour, if she has been suitably impressed with the view, the nearby food resources, the neighbourhood in general, the quality of the nest cavity, and dear knows what else… she will agree to set up house.

The nearly exhausted male now has to fill all of the unchosen holes with twigs to keep any undesirable riff-raff from moving in.

So! Wrens were the culprits to our bluebird house problems. Why those low down, dirty, conniving, sneaky little b… ah, brown birds. Well, I'll show them… won't I dear?

Good wife Julie points out that the garden is fairly bug-free due to the efforts of the wrens, and besides they are protected by law. My Plan A to eliminate the wrens came to a quiet but decisive close.

Harumph! On to Plan B then. A bit of scrutinizing revealed that the nest boxes located near the thickets and shrubs are the ones most often affected, while the ones placed on fence posts around the pasture seemed to be secure homes for the bluebirds.

Despite the annoyance of taking down and then reinstalling six boxes, I felt that this might be the best remedy to the situation (especially since it was Julie's idea). This would give the wrens their space near the concealing lilacs, and let the bluebirds and tree swallows tussle over the open country boxes

Last week I again made the rounds to check in our nest boxes; a few had tree swallows yet no bluebirds were to be found. I don't know where they have re-located to, but the farm seems to be a less cheery place without them.

I did find a couple of wrens through, along the back line fence. They were raising an awful fuss as I approached, so I took my time to see what was going on.

A wren sat atop a fence post with twig in beak, while the second wren darted and flew up to an open hole in a very old fence post. Inside the hole was a chipmunk, looking quite determined to defend its ownership.

After a few minutes of heated exchange between the bird and the mammal, the wrens flew on down the fence line. While I am no fan of chipmunks, I did wish the chippie well in its battle against the birds. Sometimes we mammals have to stick together.