Did you know those reviled burrs are the secret behind Velcro?

A Swiss chemical engineer, frustrated by trying to remove burrs from his dog, developed the game-changing fastener
Jan 3, 2021 11:30 AM By: David Hawke 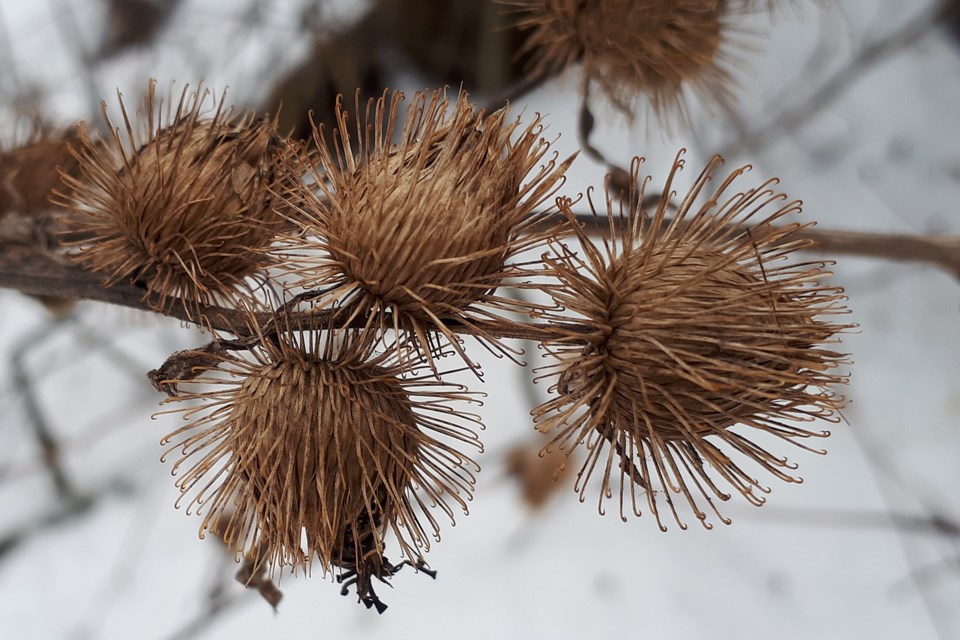 Burdock seeds, shown here, are what led to the creation of game-changing Velcro.David Hawke/OrilliaMatters

On a crisp autumn day in 1941, George de Mestral was out for a walk with his dog, Milka. They were in Switzerland, wandering about the Alps as they often did, no doubt enjoying the views and the crisp mountain air.

Perhaps Milka saw a chipmunk of the Swiss variety and dove into the trailside underbrush in hot pursuit. George, with his warm wool pants, waded into the vegetation to retrieve the naughty dog.

At the end of that fateful walk, George spent a good amount of time pulling burrs from the dog’s coat, and from his wool pants. If you are a dog owner, cattle rancher or horse person, I bet you have empathy for George and his task… burdock burrs are next to impossible to cleanly remove, and if left on the fur the resulting tangle is even worse to deal with.

But unlike most of us, George was a chemical engineer, quietly working in Switzerland while the rest of the world was trying to blow each other off the map.

His frustration with the difficulty of removing burdock seed pods led his curiosity to look closely at the reason the burrs stuck so well. Hooks. Oodles of hooks that, when able to grasp a loop of material or mat of fur, allowed the whole seed pod to be plucked from the plant and carried away.

He spent the next 10 years experimenting with nylon until he came up with a new way of fasting materials together, better than a button but not as permanent as sewing.

He named his invention, and his company, by combining two French words, “velour” (velvet) and “crochet” (hook) to come up with Velcro. His very successful company continues to this day, thanks to a sassy chipmunk teasing a dog on an autumn walk.

But that was in Switzerland, here we are in southern Ontario. Was the burdock of de Mestral’s inspiration the same plant that grows here along fencerows and trail sides? Apparently the answer is yes.

Is burdock a native plant to our area? Apparently there is some debate on that.

Most references claim that burdock was brought here (eastern North America) by the very early colonists, around 1600. There is a botanical record that claims burdock had spread and ingrained itself into our ecosystems so well that by 1670 it was considered ‘naturalized’.

Yet there are also records that say that the Native peoples had already been using burdock. Moot point, perhaps… but this is the type of info that drives botanists batty!

Nowadays burdock is considered a weed, a nuisance, a plague upon long-haired dogs and horses with otherwise beautiful manes. Chop it down! Dig it up! Spray the vile thing! Wow, have we ever drifted a long way from the original respect given to this plant.

The herbalists of yore revered burdock as one of the greatest medicinal gifts that Nature ever bestowed upon us: cleansed the blood, cured snake bites, stopped acne, and made a fine addition to a salad. It is no wonder that the early colonists from France brought this with them, as burdock was both food and medicine all neatly wrapped up in one plant. A bottle of burdock bitters was found in the arsenal of any respectable physician and was tucked into the medicine cabinet of every farmhouse.

Today, burdock gets noticed either for those seed pods or its large, rhubarb-like leaves. Indeed, some call it wild rhubarb and use the new growth leaves as a culinary supplement (after boiling it in two changes of water and adding salt). Mmmm, salty mush!

Over the past couple of years, burdock has made its presence known in another way… as a bird trap.

Several reports have been posted of small birds (redpolls, goldfinches) becoming trapped by the hooks and barbs while seeking insects to eat. At first I thought this a bit of ‘urban myth’ until the discovery of a hummingbird fatally snared within a cluster of burdock flowers.

From revered to reviled, burdock has continued to hang in there as part of our landscape flora. At least one can still make stick-together figures of animals and people by hooking one seed pod to another. This may not change the world like ol’ George did, but it’s a fun activity on an outdoors walk (just don’t wear woolen mitts while handling them).