Each mushroom tells its own tale ... if you know what to look for

It's mushroom season and our outdoors columnist has everything you need to know about these whacky, colourful fungi
Oct 13, 2019 11:00 AM By: David Hawke 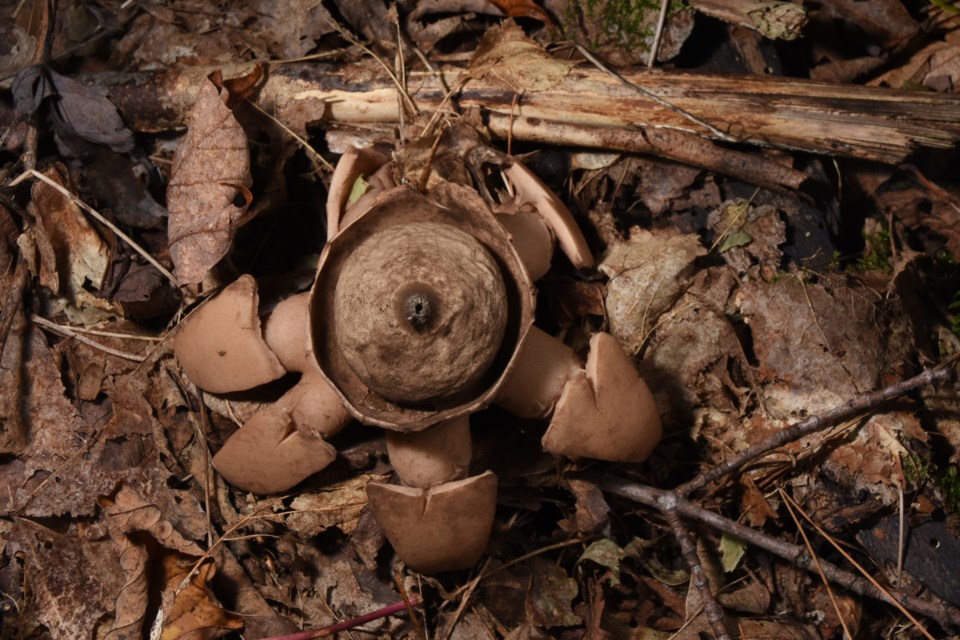 The collared earthstar puffball is unique in shape. This large mushroom peels back its outer layers to actually lift the whole structure a bit higher to catch a passing breeze for spore distribution. David Hawke/OrilliaMatters

Whether your daily walk takes you around the yard, around the block or through the woods, there is a good chance that you will have noticed a mushroom or two growing by the wayside.

Depending on your character, you may have looked upon said mushroom and thought: 1. Eww, something rotting is going on here; 2. Hmm, wonder if I can eat it... or maybe it's poisonous; or 3. Wow, look at the form and colour, what a beauty!

In defence of your character, no matter how you reacted, I must say that you have made the correct assumption. Mushrooms often are the sign of decomposition, and some are edible while many are not, and yes, the range of colour and design of mushrooms can indeed make them artistically attractive.

The terms mushroom and fungus are basically interchangeable, yet realize that technically all mushrooms are a type of fungus (however not all fungi create mushrooms). What we typically call a 'mushroom' is a reproductive fruiting structure of an otherwise unseen root mass.

About that root mass: it may be several metres in length and will either be within the upper layers of nutrient-rich soil or perhaps within the inner bark of a tree.

One of the steps in identifying mushrooms is to note the substrate upon which it is growing: hardwood or conifer, living or dead tree or branch, directly from the soil or in a few cases... what kind of animal dung: herbivore or carnivore?

Fungal roots are called mycelia, an ever-stretching network of thread-thin structures lead by a growing tip called a hyphae. Slowly yet steadily this network of mycelia penetrates through soil or rotting plant material, breaking down the material into basic nutrients that are absorbed for continued growth.

Things get interesting when the hyphae of one mycelium bumps into the hyphae of another. Instead of cross-pollinating (as happens with flowers) the hyphae begin merging and creating a fleshy mass which breaks through the surface and creates... a mushroom.

Within the mushroom are not seeds but rather spores, which when dispersed will create new hyphae (growing tips) and mycelia (roots).

Here's a side-note in regards to picking mushrooms: picking a mushroom does not hurt the plant any more than picking an apple off an apple tree.

Just as plants have a variety of ways to present their seeds (within fruit, hard nuts, seeds on parachutes, seeds with hooks, etc) fungi also have distinct methodologies of dispersal.

One way is to release the spores by dropping them from the fleshy gills under the cap. Some of these spores may be carried a ways in the wind or by surface water runoff. This group of mushrooms are called basidiomycetes and are the typical 'toadstool' shape.

Another dispersal method is to shoot the spores into the air and let them land a good distance from the mushroom. This group is called ascomycetes and includes morels, cup fungus, dead-man's fingers and other non-gilled forms.

The colour of these spores will assist you in identifying the species of mushroom, as spores may be black, tan, pink, brown or white.

A mushroom cap needs to be placed on a piece of paper for a few hours, and then the collection of microscopic spores will be concentrated enough to actually discern their colour.

Once happily in place, the spore grows a single hyphae that begins its own journey to create a new web of mycelia.

One of the things about fungi that arouses my curiosity is why the beautiful colours? Pretty flowers with sweet smelling nectar attract pollinators like butterflies and bees, but mushrooms do not require such visitations. Why not just be mushy white?

However, for whatever the reasons for colouration, I for one appreciate the rainbow of hues that can be found scattered on a forest floor.

The relationships between trees and fungi has only recently been understood.

For many years mycologists knew that a certain species of mushroom would always be found with an associate tree... ash boletes with ash trees, pine boletes with white pines. (Boletes are a group of mushrooms that drop spores but not from linear gills, the bottom of the cap in this group looks like a sponge.)

Not all fungi are for this equal give-and-take, some grow only on dead plant material and must reproduce with new spores before all the nutrients are gone from within the wood. Others are actually parasitic and are the bearers of doom when they invade a healthy tree.

Although trying to learn the identification of every mushroom species encountered is a daunting task, anyone can enjoy the array of diversity of form and colour that adds to an autumn walk.

War against invasive plant rages on
Jun 28, 2020 11:15 AM
Comments
We welcome your feedback and encourage you to share your thoughts. We ask that you be respectful of others and their points of view, refrain from personal attacks and stay on topic. To learn about our commenting policies and how we moderate, please read our Community Guidelines.