For grosbeaks, finding an ant hill is like a trip to the spa

Our outdoors columnist explains why several species of birds get themselves covered in ants ... quite deliberately
May 23, 2021 11:30 AM By: David Hawke 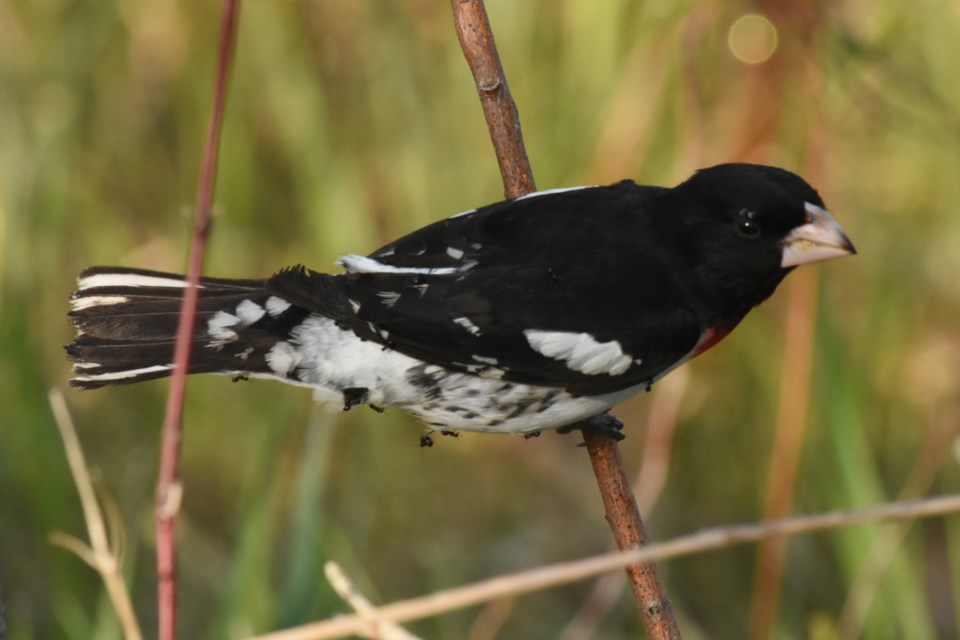 A male rose-breasted grosbeak is covered in ants after a trip to the spa, so to speak.David Hawke/OrilliaMatters

It’s always exciting to learn something new, even if it’s something that others have already discovered and researched.

Within the world of birdwatching there is ample opportunity for enlightenment as to the mysterious ways in which Nature operates.

Recently, while wandering along a quiet stretch of a rarely used walking trail, a female rose-breasted grosbeak flushed from the grasses ahead of me and landed on a branch at eye height.

Two unusual things already… that this species was on the ground (usually foraging for insects in the shrub and understory) and that it stayed around for easy viewing (usually on the shy side of letting itself be seen).

And, thirdly, it kept wiping its beak on the branch and appeared a little wobbly. As I clicked a couple of photos I wondered if it was drunk, a situation that some birds find themselves in in late fall when consuming fermented berries.

Another movement caught my eye only a couple metres away, and the male rose-breasted grosbeak appeared from the grasses! It too was vigorously wiping its beak and acting quite tipsy on the perch. This is a gorgeous looking bird with very striking plumage, so I rattled off a series of photos while provided this opportunity for some full-frame bird photography.

It was later in the day, while reviewing the pictures on my computer screen, that I found the cause of their unusual behaviours. Ants. They were both covered in ants! As the images were zoomed in, it was obvious that numerous ants were stuck all over their bodies.

So what’s up with that? Usually, when a bird’s body is covered with ants the bird is, well, dead. Time for some internet sleuthing.

Turns out that several species of birds get themselves covered in ants, quite deliberately. The phenomenon is well documented, world-wide, as studies of jays, grouse, turkeys and quite a list of songbirds have all been known to flop atop an anthill. What isn’t well known, yet, is why.

Some postulate that it is a feeding technique, luring the ants to come forth within easy reach for picking.

Others have extended this notion, thinking that the eating is secondary to squeezing the ants to release folic acid to clean their feathers of micro parasites. By wiping the bodies on the feathers the acid is expressed and the ant is then safe to eat without fear of indigestion.

And a few others, a very few others, think that this process, called anting, is akin to a trip to the spa, whereas it just plain feels good to have the feathers and skin massaged by hundreds of little crawling footsies.

Reflecting back on what I observed, the reluctance to flush easily from cover and the “I just woke up” rubbing of the beak and tipsiness of the perching, seems to indicate that I had indeed just inadvertently walked in on an avian couple’s treatment session. Sorry about that.

Now comes the curious naturalists’ mind game… do birds undergo anting regularly? Will any old species of ant work? Is there any benefit to the ants, individually or to the colony, for providing this kamikaze service?

Is this ritual seasonal, such as during feather moult? Is it a learned exercise or an ingrained response?

To answer that last fanciful thought, a group of people have studied blue jays and anting. A pen full of captive bred jays were provided with an ant colony and everyone stood back to see what would happen.

Some of the jays immediately landed on the provided ants and allowed themselves to be covered in the insects. On subsequent offerings other jays would join in. So it appears that there is both genetic preference for anting, and the possibility of being trained to partake in what the bird buddies are doing.

On the site where I encountered the grosbeaks there are many large anthills, some rising almost knee-high. The reason for this is that the water table is close to the surface and the clay based soil only dries out for a few centimetres of depth.

The ants, instead of burrowing down, burrow outwards and bring back the soil grains to be deposited at the front door, thus building a mound.

These mounds are quite easily seen, especially from overhead, and are large enough to allow a songbird to land and loll about. Perhaps the ants see this as a threat to the safety of the colony and attack in huge numbers, much to the bird’s delight.

While there is much we can learn from Nature, I think that I will not engage in this cleansing activity… something about “ants in your pants” comes to mind.