For plants and animals, it's certainly not the 'dead of winter'

Whether the snowdrifts are piled over your car or barely over your boot-tops, natural rhythms and events are still rolling out, says outdoors columnist
Jan 10, 2021 11:45 AM By: David Hawke 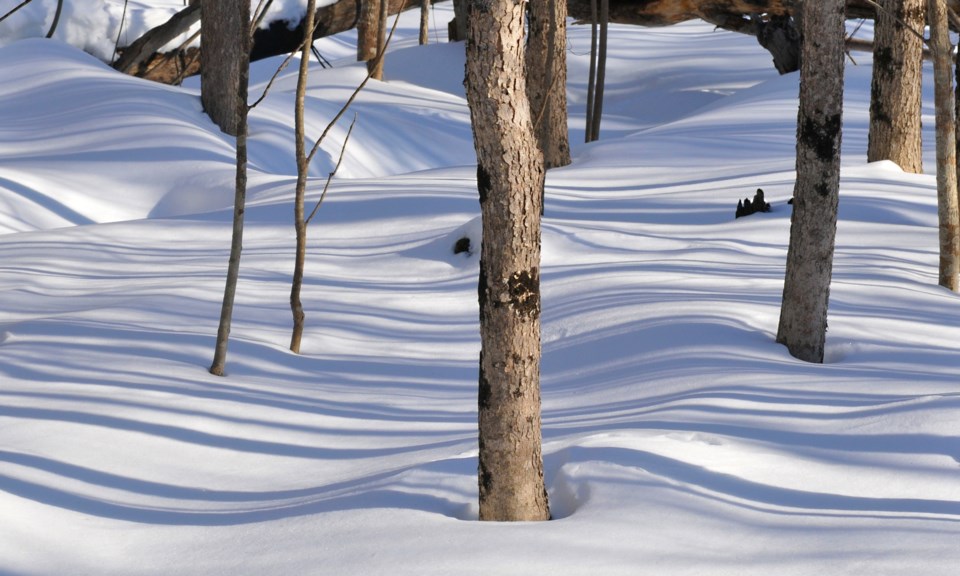 Shadows create a beautiful wintry scene, one that remains vibrant even though it's a little more difficult to tell.David Hawke/OrilliaMatters

While we collectively hunker down to get through winter (hey, it’s mid-January already) in the big cycle of life certain things do happen in winter-time. Whether the snowdrifts are piled over your car or barely over your boot-tops, natural rhythms and events are rolling out.

While hibernating critters may indeed be in snooze mode until March comes blustering in, winter migrating birds are having a great time as weed seeds are abundant and easy to access.

Roadsides ditches have an abundance of common redpolls and goldfinches feeding on the weathered remains of primrose and dock, and both pine and evening grosbeaks are snacking on the fruits of sumac.

However, as the daylight hours lengthen with each rotation of the Earth, an event that biologists call 'photoperiod' kicks in and members of both the Plant and Animal kingdoms start to change their behaviours (including the mammal species Homo sapiens).

The added minutes of available sunlight triggers reactions within us, recharges our spirits, and oh yeah, the mating season begins once again.

To quote from a scientific paper about photoperiod: “Central to the evolution of photoperiodism in animals is the adaptive distribution of energetically challenging activities across the year to optimize reproductive fitness while balancing the energetic tradeoffs necessary for seasonally- appropriate survival strategies.”

Ah, yeah, for sure, like that’s what I was going to say, eh.

Plants and animals have the built-in ability to measure day length, a trait that permits them to ascertain the environmental time of the year and engage in seasonally appropriate adaptations.

In plants, their adaptation is to begin preparing the leaf and flower buds to open as soon as sustained warmth arrives; in mammals it is the enlarging of the male’s testicles (Hey, just passing on the scientific info I’ve discovered).

As sunlight enters our eyes it stimulates the pineal gland to produce the hormone melatonin. Changes in melatonin levels provides the signal to other body parts that seasonal change is upon us and it’s time to change up the routine… get ready because spring is coming!

The longer amount of daily sunlight certainly has an effect on us: we smile more, we feel better, we cope better. This extended photoperiod has just as big an impact on us as with any other winter animal.

Red foxes are ranging widely these days and nights, as males roam the countryside looking for available females. When rabies was prevalent, this was a time of worry, as an infected male fox could cover 15-20 kilometres in a night, potentially spreading the disease to every cow, horse, cat, dog and fox it encountered. Thankfully, this disease has all but disappeared from our area for the time being.

Within the woodlots, especially the large hardwood stands near swamps, will soon be heard the mating and territorial calls of owls. January is when the great horned owl starts its breeding cycle, and loud hoots will be heard echoing in the evening as boundaries are established between territories.

If you can find an old crow, hawk or heron nest, now visible as the leaves are down, look closely as it may be inhabited by a great horned owl. Incubation takes place in February, so egg laying starts soon.

By the time the owlets leave the nest it will once again be available to the crow or hawk if they so desire it -- the original model of timeshare!

Another owl that is fairly easy to hear is the barred owl. These birds tend to stay within the confines of a balsam fir or cedar swamp, so it's unlikely to see one in a hardwood forest at this time of year.

Although the evergreen boughs are such a good screen you have to look extra close to see a barred owl, they do have a habit of presenting themselves during the day time.

The call of a barred owl is unmistakable, and it's easy to get them to call back to you. It sounds as if they are calling, "Who, who, who-cooks-for-you-all." It is a very nasal sound, with a drawn out "all-l-l-l" at the conclusion. Try it from a roadside near a big conifer swamp (but maybe practise by yourself for a while first).

This mildish winter (so far) will make it easier to see some of the smallest critters that live near us, the springtails. Also called snow fleas (don't worry, they don't bite) these flecks of black will be seen on the snow around the base of trees or old stumps.

Sunny days (and that lengthening photoperiod) entice the springtails to move up through the layer of snow to enjoy a bit of light. Sometimes massing like pepper spilled on the snow, springtail numbers are countless, as millions can be found in a square metre of soil.

Okay, so it seems we're a long way from spring right now (at least according to the calendar) so we might as well accept that we are still in mid-winter… just don't say that we are in the 'dead of winter', because life is going on, and at a lively pace for some!