'Fall webworms' create nests that are visual distractions to the landscape but most efforts to remove them are futile, says outdoors columnist
Aug 30, 2020 11:15 AM By: David Hawke 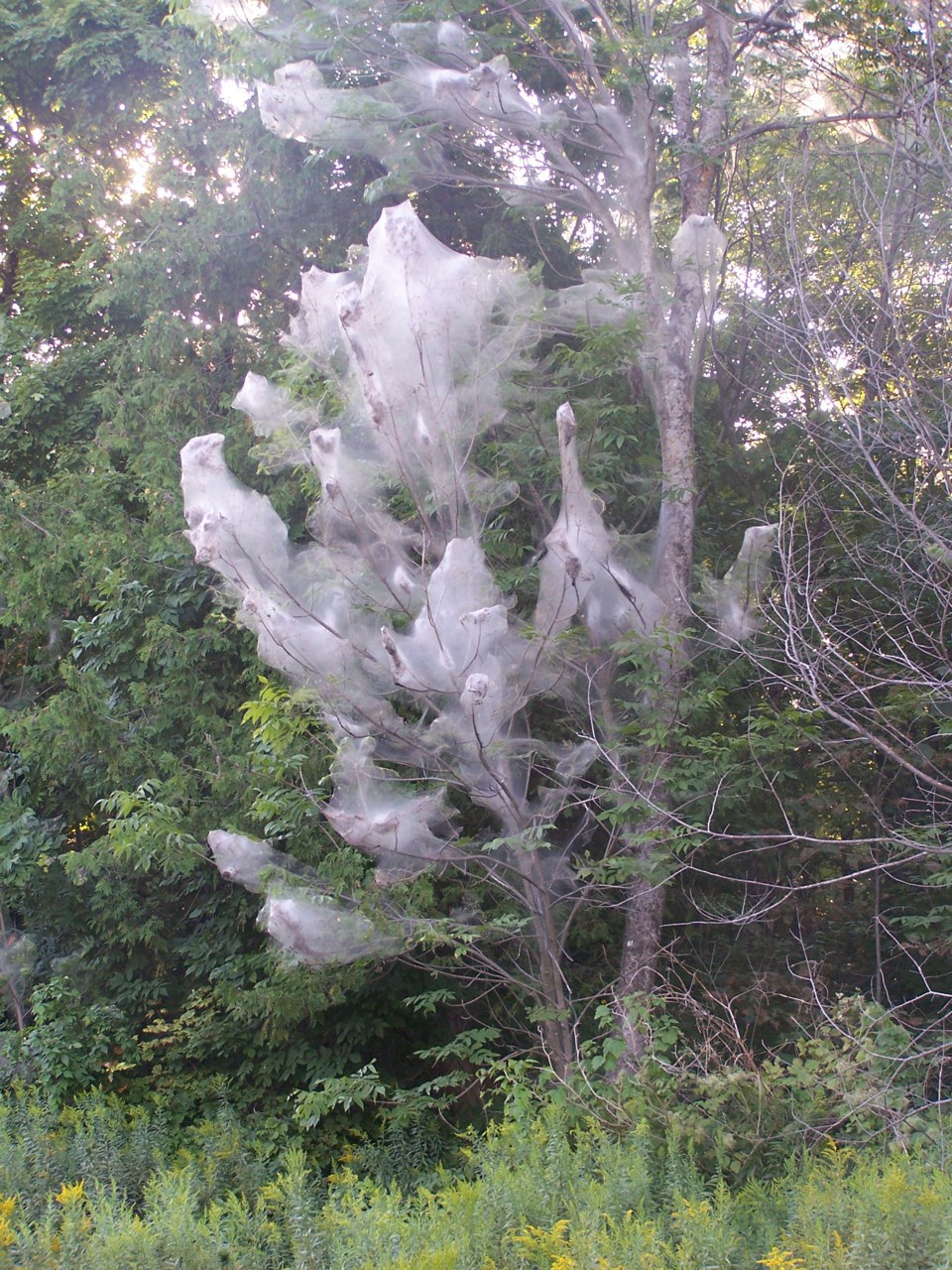 It's that time of year again where 'fall webworms' mar the landscape with ghostly shapes. David Hawke/OrilliaMatters

As I drove along the not-as-quiet-as-it-once-was back country road, the ghostly shapes that lined the roadside gave me the creeps.

Tall trees, once resplendent in their green foliage, now appeared like mummified corpses, as they were wrapped from trunk to crown in grey-white fabric. Wow, the fall webworms are thick this year!

These nests usually begin appearing in late August and early September (so maybe they should be called 'late summer webworms') and adorn the branch tips of deciduous trees across our region. Cherry and birch trees seem to be their favourite, but walnut and ash trees may also host these interesting, albeit unsightly, insects.

That sack of brown leaves is caused by a tiger moth, a rather pretty white-winged species that spends its caterpillar stage of life inside this protective nest of silk.

As indicated, these larval insects are not 'worms' but are actually moth caterpillars, so maybe they should be further re-named as "late summer web making caterpillars". Hmm, doesn't have the nasty flavour evoked as much as when "fall webworm" rolls off the tongue.

These nests are indeed a visual distraction to the landscape, and many people have tried a variety of ways to remove them.

It is highly recommended that you do not, repeat, do not, use a blow torch to burn them off. This method will harm the tree, has potential to cause small to gigantic grass fires, and really does nothing to the caterpillars, as they are no longer in the nest.

By the time the leaves inside the web turn brown, the caterpillars have already left the nest and are burrowing underground as they prepare to shed their skin for the sixth time and become cocoons.

About the only damage you can infect with the rickety ladder and flaming torch routine is to squash one, maybe two, under the feet of the ladder (or possibly more when you fall off the ladder, depending on your butt size).

After about a ten-month wait, they emerge as adult moths, the females being weak flyers and climbing up the trunks of nearby trees.

Males are strong flyers and flit about the countryside, lured by the pheromones (dizzying scent) of distant lady moths. After the romance and honeymoon, each female will lay 200 to 500 eggs on the underside of leaves, wrapped snuggly in a fuzzy mass.

The caterpillars that emerge in mid-August quickly begin building a clear net around the leaves and dine on the enclosed green salad. As they grow and need more space and more food, the nest is enlarged and more leaves are surrounded.

The web caterpillars never leave the nest, unlike tent caterpillars which dine on leaves at night and sleep in the tent during the day.

A close examination of a fall webworm's nest will reveal many shed skins (five old skins per caterpillar) plus all their droppings. This waterproof and windproof structure is their whole world during the caterpillar stage.

Natural predators of fall webworms include a few bird species and a couple of wasp species. The wasps actually enter the web, either by chewing their way in or entering a fold in the web. They then sting a caterpillar, drag it outside and carry it away to their own lair. Not a great deterrent to the caterpillar colony, but no doubt fairly traumatic to the individuals involved.

Like so many other species, fall webworm populations seem to go in predictable cycles. A large infestation occurs every six or seven years. Populations then crash and it takes several years until the population peaks again, just like those other leaf munching caterpillars, the gypsy moth, the eastern tent caterpillar, and the forest tent caterpillar. Cycles happen.

Old webs can be removed by clipping the branches off (which does more harm to the tree than the caterpillars did), or bashing them down with a long stick; how high you can reach depends on the length of the stick and is somewhat linked to whether or not you fixed the ladder from the last time you tried this futile effort.

Homeschooling your kids? Outdoor education opportunities abound
Sep 6, 2020 11:15 AM
Comments
We welcome your feedback and encourage you to share your thoughts. We ask that you be respectful of others and their points of view, refrain from personal attacks and stay on topic. To learn about our commenting policies and how we moderate, please read our Community Guidelines.