Iconic, familiar trillium has deep roots in the Canadian story

Official recognition began after First World War as white trillium was chosen to be planted on graves of Canadian soldiers, but there's lots to learn about this perennial
May 16, 2021 11:30 AM By: David Hawke 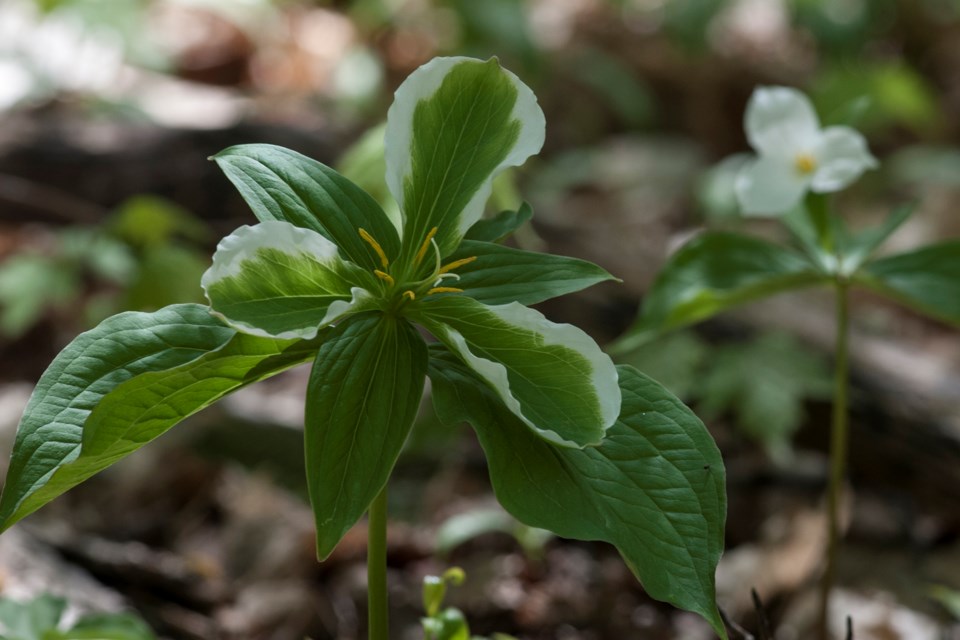 This green-striped trillium, which started showing up in Burlington area in mid-1980s, was photographed in Oro-Medonte.David Hawke/OrilliaMatters

Without a doubt one of the most easily recognized signs of spring is the blooming of the white trilliums within our local woodlots.

Of the four species of trilliums found around here, the whites bloom just a day or so after the reds, and then the painted and nodding species kick in over the coming weeks.

It’s no secret that we love our white trilliums… it is our provincial floral emblem, its image is within the logo of several provincial organizations and many businesses and even a school board have the name tucked ahead of whatever it is they do.

Official recognition began back just after the First World War, as there was a committee formed to choose a flower to be planted on the graves of Canadian servicemen buried overseas. The white trillium was chosen but the official process to enshrine this species was never completed, so Ontario took it on in March 1937 under our Floral Emblem Act.

With this new designation came a great venue for teachers on Nature Day field trips (yes, they did such things in the 1930s and 40s) to sound wonderfully informed and authoritarian (yes, they did that too back then) by declaring it to be illegal to pick a white trillium.

Unfortunately, no such law has ever existed; and even in 2009 the proposed White Trillium Protection Act did not get past the first reading at Queen’s Park.

In 1964 the Ontario government, under PC leadership of John Robarts, designed the first provincial logo; this design was tweaked in 1972 by PC Bill Davis.

In 2006 Dalton McGuinty, of the provincial Liberal party, radically changed the design to the “three men in a hot tub” look (inadvertent, I’m sure). And recently, in 2019, the Doug Ford PC party revised it again, so it now looks like the original design.

Round, round we go. (Anyone ever figure out the cost of replacing all the stationary, building signs, vehicle stickers, business cards and tourism advertising each time a new logo appeared? Just wondering.)

The white trillium has been in the news for several decades, indeed centuries. Back in 1760 a British botanical group named this flower True Love of Canada. While I am not sure of the Indigenous name of this plant, it was already being used medicinally in wound dressing and the birthing process, hence the early translations of it being called Birthroot.

As the white trilliums are large, common and easily encountered in the spring, they do indeed represent our collective sigh at getting through the winter. Trilliums are called phototrophic, in that they face toward the sun and will twist their stalks to ensure the blossom follows the sun across the sky. If the trail you are walking along happens to run by a south-facing slope within the maple forest, you will see the proverbial carpet of white blossoms.

For a seed to become a flowering plant is a long time journey for a trillium, about 10 years in total. As the seed head of a pollinated trillium droops to the forest floor in mid-summer, it becomes soft and spongy. The 16 seeds inside are covered in a rather sweet coating which attracts woodland ants.

The ants gather the sticky seeds and drag them over to and then down into their underground storage chambers. In late fall the ants eat the sweet covering and leave the seeds untouched. After a two year wait, when the ground becomes soft and damp with a springtime melt, the seeds will germinate and grow.

For the next five to seven years the trillium plant will produce leaves but no blossom. This time is spent collecting energy from the sun and storing it within the roots. After a short decade of this grow-and-store process, it will produce a blossom, hopefully before the canopy of maple leaves open and create shade on the ground below.

So if you pick a trillium for a Sunday afternoon bouquet, you are wiping out seven years of diligent growth by that plant. Although it is a perennial, the roots of the plucked plant will not re-establish a new shoot. It is dead. Enjoy your bouquet.

Of a somewhat more recent note, the white trilliums are beginning to sport a trendy green stripe down the middle of each petal. Indeed, some petals are now more green than white, depending on the plant. So what’s up with that?

This green-stripe phenomenon started showing up around Burlington-Milton in the mid-1980s. Quite unique and immediately noted by botanists both professional and casual. Since then the green stripes have been showing up in forest after forest, continually moving northwards.

While not yet ‘common’ to the Orillia area, these aberrant blossoms have become scattered throughout the region.

But I have observed first-hand that the plants with a green strip often have smaller leaves than a ‘healthy’ trillium, if that counts for anything.

Actual research has been ongoing toward understanding the workings of these perennial, phototrophic, members of the lily family and those learned individuals in the lab department have determined that a green-striped trillium has 58% unsuitable pollen, compared to a regular trillium with a pollen failure rate of only 3.2%. Why is that not on the evening news?

Soon the spent blossom will be turning pink so get outside if you can and take a springtime wander through a maple forest and enjoy the annual display of our provincial floral emblem. Just don’t pick it…