Working in the great outdoors is always a learning experience, David Hawke says
Aug 25, 2019 11:00 AM By: David Hawke 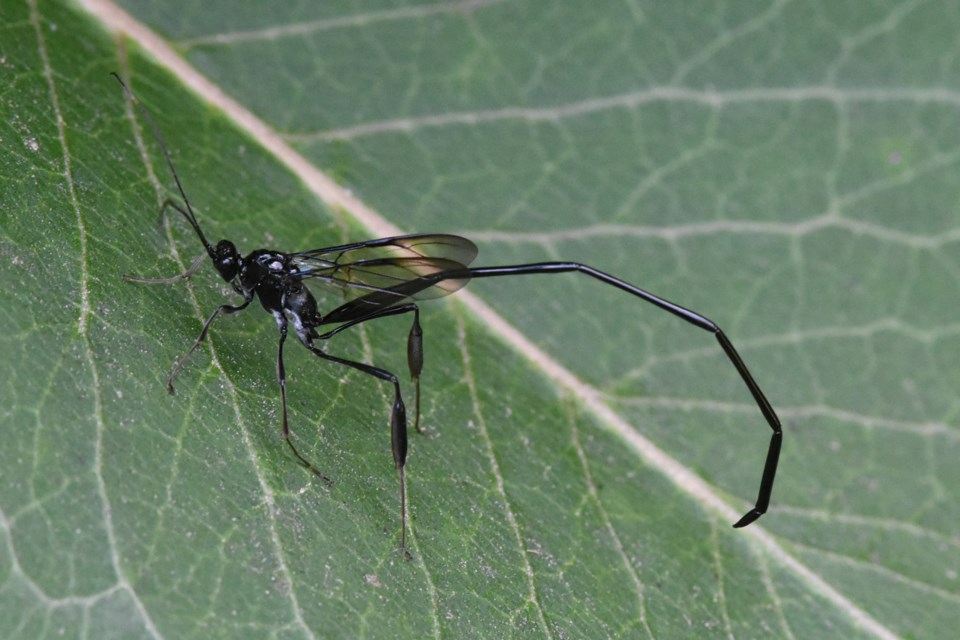 This Pelecinid wasp has paused in her search for a living caterpillar on to which she will lay an egg. David Hawke/OrilliaMatters

There is a saying amongst naturalists, especially group leaders, to beware of "shooting from the lip."

Perhaps this paraphrase will only resonate with those readers who were raised on Western movies where the bad guys shot first and fast, trying to one-up their rivals; it means that sometimes caution is required before blurting out an statement. In a way, I fell for that in last week's column.

The text was a detailed background about Ichneumon wasps... but the picture attached to the article was of a Pelecinid wasp. Oops! And I got called on it. Sorry about that. My bad.

However, to save face a bit, herein are some cool facts about Pelecinid (pel-e-SY-nid) wasps, things I discovered whilst scrambling to right my wrong.

Ichneumon and Pelecinid wasps are both predator wasps, seeking grubs on to which to lay their eggs. Instead of building colonial nests these insects have a fairly independent lifestyle, spent mostly hunting for a living nursery.

While that may sound kind of icky, wait until you hear about the benefits these wasps provide to us. But first, what is difference between these two groups of wasps?

Ichneumons (there are several species) have a heavy abdomen and a very long appendage hanging out back that is used to deposit their eggs inside a grub that is burrowing inside a piece of wood.

Pelecinid wasps (there is only one species) have a long thin abdomen, almost scorpion-like in appearance, that is used to deposit their eggs inside a grub that is burrowing in the soil. (See accompanying picture.) Whew, glad to finally have that cleared up.

The female wasps have that long, sophisticated egg-laying appendage and are easily seen because of it. The good news, for us, is that it is not a stinger such as a hornet may pack.

It's more of a drilling apparatus, a unique adaptation to get through material to where the grubs are hiding. And here's where we learn how these wasps are a great neighbour.

Now you could trap the skunks and dispose of them, but that expensive and the missing ones will be soon replaced by others. Or you could treat your lawn with some sort of "Bug Begone" product, but that's also expensive and not at all good for the environment in general. So what are you to do? Hope for Pelecinid wasps to move in!

That long black abdomen is designed to penetrate soil, and these wasps are looking for a certain type of prey... June beetle grubs! Somehow they know they are down there, and once located and an egg laid, the grubs are doomed to become breakfast, lunch and dinner for the developing wasp larva.

As you now scour the neighbourhood looking for these wonderful lawn care assistants, you may notice they are all females (with that extra long tail-piece). Apparently males are in short supply right across the continent, so the females have to undergo parthenogenesis. Say what? That's fancy science talk for self-fertilization.

Parthenogenesis comes from both the Greek and Latin languages: parthenos is Greek for virgin, and genesis is Latin for beginning. As the males are found only south of the Rio Grande, the species had to find a way to sustain itself over the rest of North America, and voila, parthenogenesis! Ain't Nature amazing?!

So there you have it, my acknowledgement of hitting the 'send' button before I had done all my fact checking.

Yet look at all the neat info that was discovered because of it. And a note to readers: Don't hesitate to call in a misidentification... maybe I can learn a thing or two as well.

Unique 'swamp monsters' are masters of camouflage
Jul 19, 2020 11:30 AM
Comments
We welcome your feedback and encourage you to share your thoughts. We ask that you be respectful of others and their points of view, refrain from personal attacks and stay on topic. To learn about our commenting policies and how we moderate, please read our Community Guidelines.