Mother Nature is taking care of those pesky caterpillars

Did you notice hundreds upon hundreds of dead caterpillars on local trees? Our outdoors columnist explains what happened and why 'gypsy moth' term is out
Jul 11, 2021 11:30 AM By: David Hawke 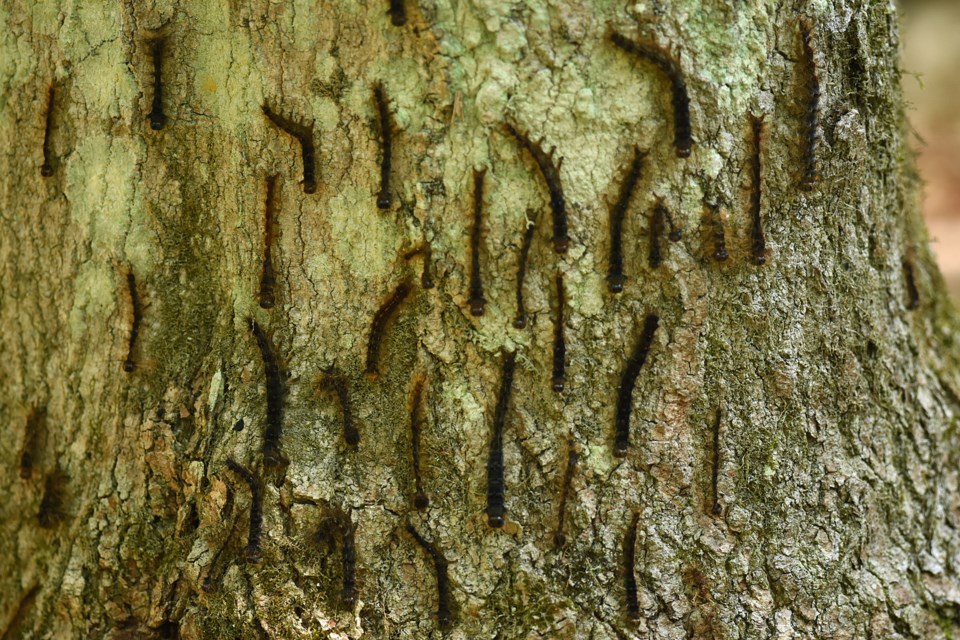 Most of those unwanted tree marauders plaguing the region were wiped out in recent days.David Hawke/OrilliaMatters

I had hoped to move this week’s topic along from yet another tirade about invasive species, but woe, found some really interesting factoids about those fuzzy-wuzzy caterpillars, the gypsy moths.

If the trees in your neighbourhood are as defoliated as mine, I’m hoping this information will be worthy of your attention.

First up, a discussion about the name change of these unwanted tree marauders, as it has become politically and biologically incorrect to call them “gypsy” moths; the new name is LDD. I know, I know, “say what?”

The label ‘gypsy’ has historically been slapped upon a certain tribe of people for the past 1,500 years. This group, which seems to have originated in northern India, are a sect that does not believe in land ownership.

While they have many rules within and have a hierarchy of order, they feel that they are simply part of the larger, natural world and therefore do not recognize political, municipal or social boundaries.

They called themselves Romani or Roma (not to be confused with Romans) and led a very nomadic lifestyle as they roamed across Europe. As they travelled about in caravans, they simply took what they needed from wherever they happened to be.

This attitude did not sit well with the locals who saw land and possession ownership in a different light, so a nasty nick-name was devised: gypsy. As with most nasty nicknames, it was wrongfully devised, as the locals felt these wanderers were originally from Egypt and hence the slurred phonetics.

The Romani are now considered one of the largest minorities (nice oxymoron) and are found across the planet. They must have a good PR person for as the gypsy moth plague increased and became mainstream news, suddenly a push was felt to re-name the insects away from this culturally offensive slur. And thus LDD is their new identifier.

LDD stands for Lymantria disper disper, the scientific name for gypsy moth, er, I mean this particular insect species. I have to admit, writing LDD in my field notes is much easier than the longer common name. However, when I say it out loud I will be referring to them as “El Dee-dee” and will perhaps use an exotic accent.

Okay, on to science. If you have been combating these critters or even just taking close notes of their behaviours, you will have seen in the past week or so that they all suddenly just up and died, their corpses hanging on tree trunks like some gruesome warding off of evil spirits.

There are literally hundreds upon hundreds of dead caterpillars on each of the red oaks on our farm. What’s up with that?

A bit of research has revealed that a virus and a fungus have collectively come to our aid. If you can stomach it, look closely at these dead caterpillars… some will be hanging head down while others are bent in a downwards V-shape. Our trees sport both positions, which is good news.

The V-shaped LDD carcasses have been killed by the nuclear polyhedrosis virus, or NPV. The head-down LDDs have succumbed to Entomophaga maimaiga, a type of fungus with no cute short form to its name.

NPV is a natural virus that stays dormant in the soil, waiting for two things: rain and a mature moth caterpillar to come crawling by. As LDD rests in the grasses during the daylight hours, it picks up the virus after a rainfall has released it from the soil.

The virus particles are carried upwards to the leaves where the caterpillars eventually eat it. This is when things get nasty for the caterpillar, as the virus is released in the gut and then totally disrupts the digestive system.

As the caterpillar poops, and later liquefies, the virus is released into the air to infect other nearby LDD. Within a few days the entire population is killed as there is a 100% mortality rate.

Can we humans get NPV? Yes and no. Yes, the airborne virus particles can be inhaled by other creatures, like us, but the virus only activates within an alkaline digestive system such as is found with moth caterpillars. Lucky for us our digestive system is acid-based and the virus simply passes through us.

The fungus with the fancy name is also a mortality factor. It was deliberately introduced to south-west United States from Japan in 1910 and 1911 as an insect control, but did not spread. However, in 1989 it suddenly appeared in the north-east States and has spread rapidly. Scientists are still scratching their heads as to how this happened.

LDD caterpillars go through five growth spurts called instars, each stage allowing for the shedding of skin and new formation of armaments. This fungus only attacks the last instar stage, so we did not see it until the caterpillars were just about mature enough to form their cocoons.

Caterpillars with E. maimaiga fungus die hanging head down with bodily fluids dripping forth. The fungus spreads via this liquid dispersal and also as the body falls to the ground for final decomposition.

Apparently the fungus can be carried to the cocoons, the adult moths and the egg cases. So here’s hoping this LDD epizootic event will be less intense next year. (Epizootic is the equivalent term for an insect plague as to our mammalian pandemic.)

The rains came late this year, and the caterpillars had to mature anyway, so perhaps the saying “better late than never” will apply here. It will be very interesting to see next June how great the impact has been on the local LDD population.