These tiny insects, more properly called springtails, are the most plentiful creature in all of Ontario and are found everywhere on globe, says outdoors columnist
Mar 21, 2021 11:30 AM By: David Hawke 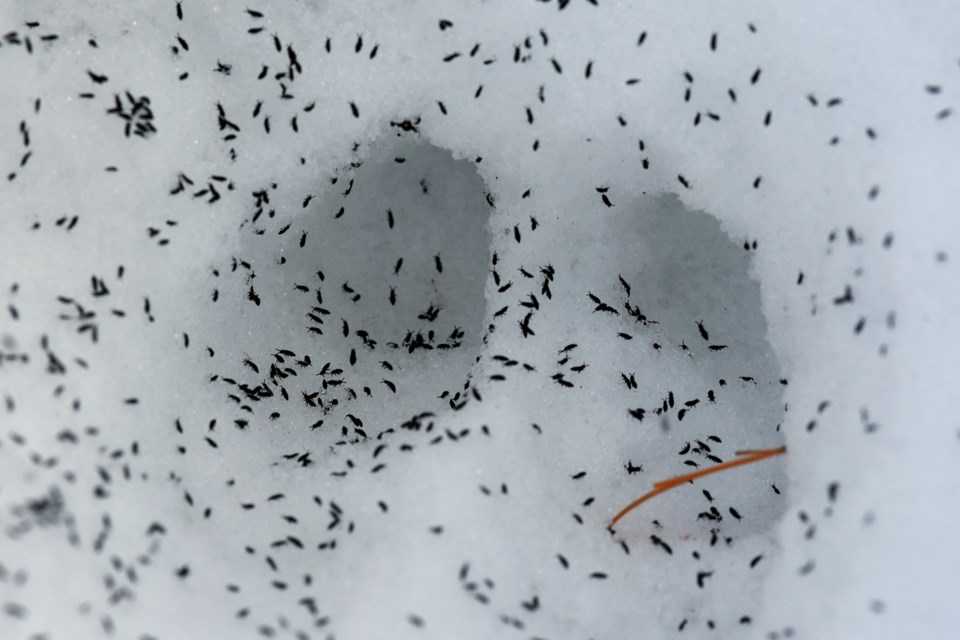 Thousands of snow fleas blanket the remaining crust of snow; about 40 of them would easily fit on a person's thumbnail.David Hawke/OrilliaMatters

As the photo period (amount of daylight per day), the humidity and temperature are combining to make a near-spring day actually feel like a spring time day, I was enjoying a walk through the local hardwood forest.

As is sometimes the case, an event of great magnitude was happening right under my feet… or should I say, under my boots, although the new insulated insoles cushioning my feet are really appreciated.

"Snow fleas!" Literally thousands upon thousands of the tiny insects blanketed the remaining crust of snow. They are so small that 40 of them would easily fit on a person's thumbnail!

These tiny insects, more properly called springtails, are the most plentiful creature in all of Ontario (yep, there’s even more of them than blackflies and mosquitos combined, so you know that's a lot).

Their population is very challenging to estimate, however someone has figured out that there are about 25,000 of these guys and gals in each square yard of soil (most common in undisturbed areas like forests but absent from places where pesticides are applied).

Not only are there a lot of them, but they are everywhere -- and that's speaking globally. From the Antarctic to the Arctic, snow fleas are found just about everywhere.

But wait a minute, if they're found in the tropics, would they still be called snow fleas? Probably not, as their proper common name is springtail.

Springtails are unique in that they have a stiff, hinged appendage that tucks under their abdomen and when they have to move a great distance they unlock this tail piece which flips down with such force that it flips the critter up, up and away for quite a distance.

Back to the name ‘snow fleas’ for a moment: no, they do not bite people or dogs or birds. They eat only vegetation and never live on another creature. Parasitic fleas and lice are also small, and 'way back when' somebody thought the little springtails looked suspiciously like a cat's flea. Not even closely related.

Not only are they numerous, but their role in nature is perhaps one of the most critical of any species on Earth. They live in the soil where the air spaces between the dirt particles are big enough to accommodate them. Here they feed on organic litter, perhaps better known as 'dead leaves.'

When a dead leaf falls to the ground, it will eventually decay and become soil again. That process would not happen as efficiently as it does without the help of the springtails.

The fallen leaf is swarmed by these insects which chew it into itty-bitty teeny-weeny chunks, thus allowing the fungus and bacteria to go to work and release the nutrients and create humus soil. Without the springtails, the leaf would just lay there, decomposing but very, very slowly.

Despite their importance and abundance, little is known about springtails, comparatively speaking. Volumes have been written about rare or romantic species (e.g. loons, bears, wolves, falcons, etc.) but only a few scientific documents focus on snow fleas. Is this an image problem or what?

Also of interest (at least to me) is that a snow flea has no 'tailpipe', that it's excrement is shed with its old exoskeleton during molting... I guess this is where the saying "a change is as good as a rest" comes from. However, realize that this anatomical feature is a point of disagreement between some biologists.

One thing biologists do agree on, is their sex life (no, not their own sex life, the springtail's… let’s stay focused, shall we?). So where do all the baby springtails come from?

From adults of course (this is known as basic biology) however, just how the females become fertilized is of real interest (okay, so maybe it is just me), as the males and females never have to meet each other. The males deposit sacs of spermatozoa throughout the area, and the females pick up the sacs and become fertilized, never knowing exactly who the father might be.

In just nine weeks’ time the eggs have hatched and the kids are producing offspring of their own. While this doesn't allow much time to put away a few leaves in an RRSP (Really Rotten Soil Production), it does keep the population very high, a crucial requirement to ensure that new soil is constantly being produced.

All it takes is a sunny day to lure these critters topside of the snow, sometimes even in the middle of winter. Maybe the sunshine entices them to have a party topside? Whatever the reason, their presence added an element of discovery to the outing.