Seeing loons while canoeing in the fall ... true Canadiana

Paddling on a near-north river took on a whole new feel thanks to close encounter with feeding, ruby-red-eyed loons preening near the canoe
Oct 11, 2020 11:30 AM By: David Hawke 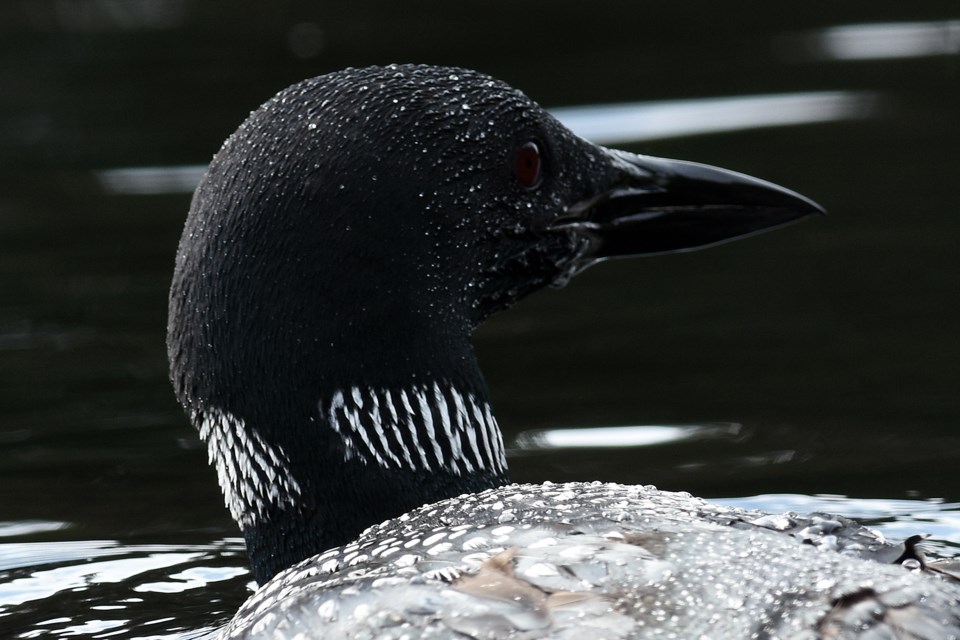 Loons and canoes seem to go together in a proper order, like a hand in a glove type of feeling.

To go canoeing and not encounter a loon is a tad disappointing, resulting in the outing feeling as being less than fulfilled. Oh sure, the great blue heron was nice, and the duck family observed along the shore was cute but when a loon sighting is not part of the checklist, well, you know, at least we got some exercise.

Admittedly, one has to go to loon country to see one. And that means paddling on big water, not the narrow and shallow streams and marshes we usually traverse.

A pair of loons need a lake of at least 10 acres in size although they prefer 50 acres or more. Lakes that size simply do not exist in southern Ontario, and the larger lakes of cottage country have, well, shoulder-to-shoulder cottages.

This density of buildings, disruption of natural shoreline and constant disturbance from watercraft have pretty well eliminated this part of the province from historic loon nesting.

According to data within the Breeding Birds of Ontario you have a 36% chance of seeing a loon if you are in loon habitat. And loon habitat is found within the Canadian Shield part of our province… that glorious mixture of rock and beaver ponds.

Okay, so it’s also the best habitat for blackflies and mosquitoes, but I can overlook that; bring on the white pines, granite outcrops and abundant waterways!

And so it was a few days ago as Julie and I were paddling along a near-north river, celebrating her birthday wish and only a month behind the actual date.

The colourful maple leaves had recently fallen, the dark clouds were suggesting that October was about to get wet, indeed very wet, and a slight breeze pushed against the side of the canoe making for some dedicated paddling techniques.

All-in-all a great day to be on the water. Crimson leaves floated by on the black waters, the dramatic skyscapes were amazing to witness, and the damp weather caused the darkened hardwood tree trunks to stand out in amazing contrast to the evergreen backdrop.

As we paddled along a kingfisher kept flying ahead of us, just a bit too far for a good photo but nonetheless adding a nice component to the day. However, after an hour and seeing only this kingfisher I was starting to get this “what are we doing here” feeling.

It was on the return leg of our journey that I noticed a lot of splashing and glinting of light going on along the far shore of a large bay. Otters? Paddle strokes became deeper and stronger.

The setting sun was in our eyes and despite the cloudy cover it rendered everything ahead of us as black-and-white: the silhouette of the far tree line, the glinting of the water’s surface, the plumage of the loons. Wait… what? Yes! Loons!

A pair of them were on a feeding frenzy, vigorously diving and kicking water about as they pursued a school of fish across a shallow sand bar. We circled the canoe well upwind of them and then stowed paddles and drifted by.

The birds were aware of us yet barely stopped their feeding tactics. Like trying to get a photo of an Olympic swimmer doing the breast stroke, their heads would pop up for a quick breath and then they were gone again.

Unlike the aforementioned Olympic swimmer, these birds did not travel in a straight line, so predicting the next surfacing was, well, unpredictable.

Eventually they calmed down and began preening and doing their post-exercise stretches… that iconic wings-outstretched loon posing! And right beside the canoe. We were impressed!

Being so close to us we could see the colour of their eyes, which is ruby-red. For years I have wondered about this, and with the assistance of Prof. Google I sought an answer.

First response to my query was that the red pigment in the retina filters light and allows the birds to see better while underwater.

But there was more than one reply, so I scrolled a bit deeper. Mark Twain has been accredited to saying that some scientists can get “such wholesome returns of conjecture out of such a trifling inventory of fact.”

Seems that the ‘underwater red-eye’ explanation is more Trump than Suzuki. Many birds have red eyes, yet are not underwater feeders, and other birds that do feed underwater have regular dark eyes.

Young loons have dark eyes yet catch fish starting at a very early stage of their life… so something isn’t adding up quite right.

Close study by scientists who avoid making conclusions based on a trifling of fact have discovered that the redness is actually in the iris not the retina as first thought. Turns out that those intense red eyes are all about maturity, and maturity is all about dazzling a member of the opposite sex.

As we lashed the canoe atop the car and reflected on our short yet rewarding journey, there was a comfortable and satisfying feeling of ‘mission accomplished’. Canoes and loons, can’t get much better than that.

Unless a family of moose steps out in front of you… Julie, grab the camera!

Changing seasons create challenges for snakes, other critters
Oct 4, 2020 11:30 AM