This caterpillar is pretty ... pretty toxic! Be careful, outdoors lovers

Perhaps the saying 'look it up before you pick it up' is the best advice for dealing with these spiny crawlers, says outdoors columnist
Oct 6, 2019 11:00 AM By: David Hawke 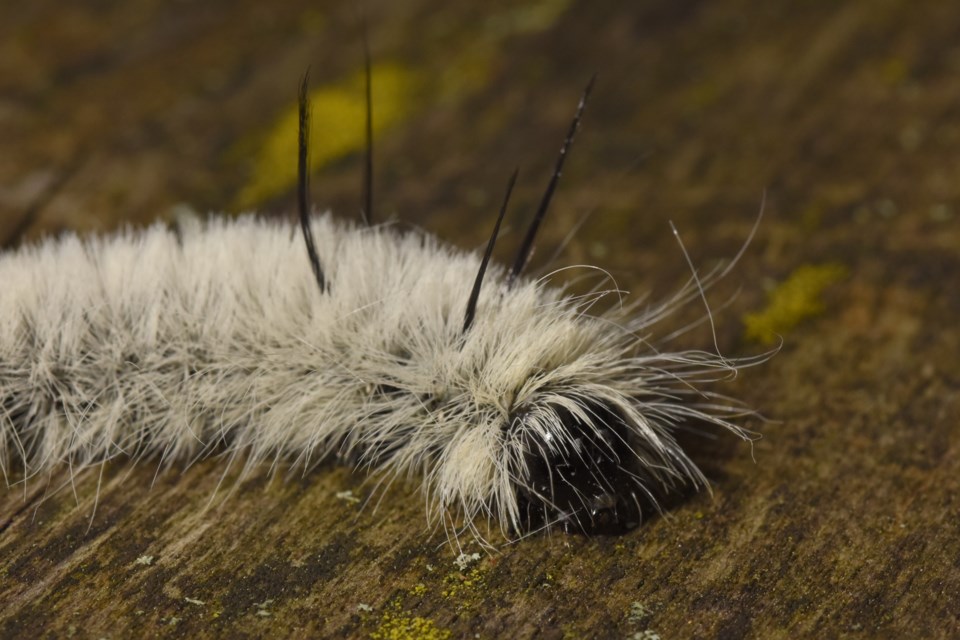 The Io (pronounced EYE-oh) moth caterpillar is a big caterpillar with very obvious clusters of spines protruding from a lovely lime green skin. It looks pretty but carries a toxin that can be anything but pretty. David Hawke/OrilliaMatters

"Beware the dagger moths! Beware the tussock moths!" is the cry that is going across the land this fall, and for good reason.

Some folks have ended up in the hospital with a major skin rash and pulmonary problems while many others are enduring numb fingers or itchy hands. But there are more critters out there than just dagger moths to be aware of.

It's not the adult moth that's the problem, it's those spiky, hairy, just-creeping-along caterpillars that are causing the grief. In addition to the Daggers there is a large group called Tussock-moths, as well as numerous other poison toting caterpillars.

It is easy enough to see the stinging hairs protruding from the backs of these caterpillars, but what is not so noticeable (to the eye) are the barbs that coat these easily broken hairs.

If the little fuzzy-wuzzy is crawling across your arm, the tiny hairs break and fall into the layer of perspiration that lines your skin, and here they stick and imbed like shards of fiberglass. Not only quite painful but also capable of triggering an allergic reaction in susceptible people.

This past month two of my colleagues were victims of the toxin found in an Io (pronounced EYE-oh) moth caterpillar.

This is a big caterpillar with very obvious clusters of spines protruding from a lovely lime green skin; looks pretty but my-oh-my the reactions caused when physically encountered were noteworthy: one had part of her hand go numb for two days after picking it up (in a laneway-crossing rescue), while the other accidently brushed her arm on a camouflaged beast and she was stung right through her sweater as if pricked by a hawthorn. Seriously not nice experiences.

I found a 1927 report on tussock-moths and within were a couple antidotes for the rash, the more popular being a mash of purslane (Portulaca) leaves applied directly on the rash. If you have a nasty rash from an encounter with a caterpillar of either a dagger moth or tussock moth, may be worth a try.

Despite the cooler temps of late, you still need to be aware of these caterpillars, as they have now woven a fuzzy cocoon to spend the winter months. If you touch this cocoon the tiny hairs are still volatile and may again cause a nasty burning rash on you.

This seems to have been a banner year for these caterpillars as they were so numerous that several shrubs were completely defoliated. While they usually eat the leaves of most deciduous trees, several dogwood shrubs were hit hard. And as you may have already noticed, there were caterpillars everywhere this year.

Even in early October we still have a milkweed plant in the yard that is hosting well over a dozen tussock-moth caterpillars, and several dagger moth cats (that's the cool slang name for caterpillar) can be found on, around and under the deck.

All will be searching for a quiet crevice to build a winter cocoon, so until the frost really settles in, they will be out there!

Perhaps the saying "look it up before you pick it up" is the best advice for dealing with these spiny crawlers.

Although they may even drop down on you from a high branch, it's best to flick them off as soon as possible before those fragile hairs start falling on your skin or sweater.

However, if you are experiencing a skin rash that lasts longer than a day, go see a doctor... untreated rashes can quickly manifest into something serious.

This article, despite the tone, is not to intimidate you from going out of doors; just be aware that these guys are numerous this year so it is likelythat you will find a few on any outing.

Take a look, take a pic, just don't take a poke with a finger

War against invasive plant rages on
Jun 28, 2020 11:15 AM
Comments
We welcome your feedback and encourage you to share your thoughts. We ask that you be respectful of others and their points of view, refrain from personal attacks and stay on topic. To learn about our commenting policies and how we moderate, please read our Community Guidelines.