This weather is blooming madness! The trilliums are shivering this year

Our outdoors columnist has been diligently tracking blooming (and other) data of local wildflowers for four decades
May 10, 2020 11:15 AM By: David Hawke 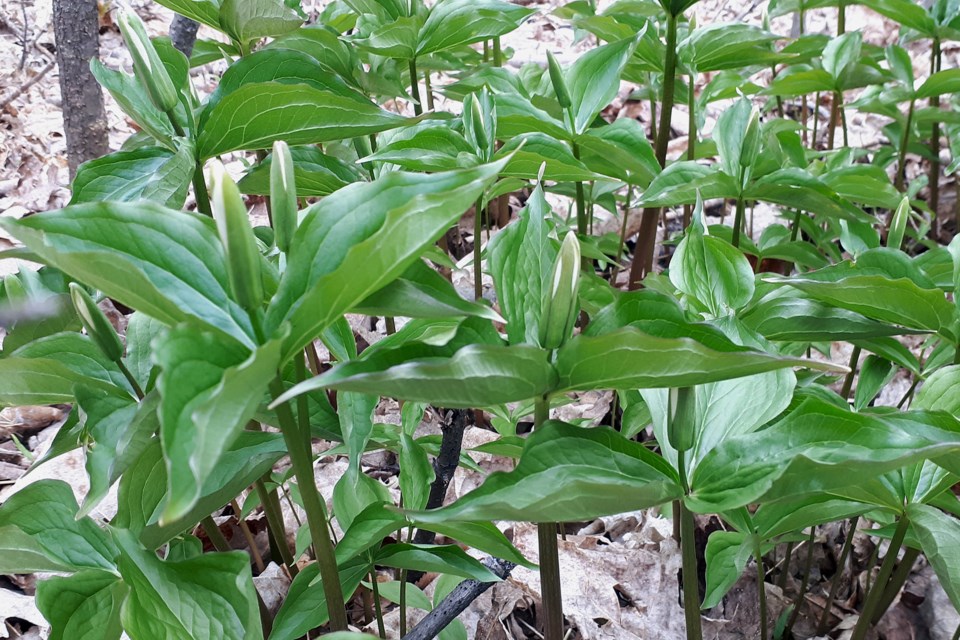 There are a lot of factors that help determine when wildflowers like trilliums begin to bloom. David Hawke/OrilliaMatters

It may have just been the way the cool breeze swept over them, but I think I saw a patch of white trilliums shivering.

Heavy in bud, not yet open, waiting, waiting… when will it be warm enough to burst open into radiant bloom? I mean, really, what’s up with the weather this spring?

For the last 40 years I have been keeping records of the blooming dates of our local wildflowers and am amazed at the variation of starting times for each species when looked at on a year-to-year basis.

This process is called phenology, which is the tracking and comparison of one species against another with relation to annual climatic variations. Think “does climate change have an impact on when local flowers come into bloom?”

Admittedly, when this project was first started in 1979, “climate change” was not a term used by most people; back then “acid rain” and “pollution” were all we cared about.

So I have to admit that the initial collection of these data were to satisfy my curiosity as to what dates I should plan my photographic expeditions… did the showy lady’s-slipper orchid bloom in late June or late July? I assumed that with a few years of record keeping I could predict my timing to a particular habitat and quickly find the sought after flower in full spectacular bloom!

As with so many other science-based projects, the results began to reveal how little we know about the subject and how adaptable the plants are to survive and thrive in years of drought, flood, freezing temperatures or abundant sunshine.

My first “ah-ha” discovery was related to something called heat units.

Anyone who grows crops commercially knows that heat units are all important to plant growth. In our globally temperate region, a plant does not produce growth cells until plus five degrees Celsius.

From zero to plus five it just sits there, biding its time until the sun shines a bit stronger; at plus six things happen in the growth department and the more heat that comes along the faster cell growth occurs.

So I gathered weather info for the matching years of my flowering observations and created some way cool graphs of the heat units produced each spring. The thought was that by tracking a year’s heat units the prediction of blooming time could be perfected. Makes sense, doesn’t it?

Well, maybe to you and me, but not to the wildflowers!

While there was a general correlation with blooming dates between a cold dry spring and a warm wet spring… the data were not consistent. Some years the species bloomed with a few heat units and other years the same species needed oodles of heat units.

So what was I missing to obtain accurate predictions?

With a bit more research it was obvious that I was missing a lot. Not only was heat availability a variable, so too were hours of available sunlight, soil dampness, and exposure to the sun (growing on a south-facing slope versus a north-facing slope).

The more I delved into plant growth the more detailed the requirements became: how much snow cover was there the previous season? How deep did the frost go into the ground? How deep was the soil over the bedrock?

On that last point the flowers growing on thin soil over solid bedrock tended to blossom a week ahead of its counterparts that grew on deep loamy soil that took longer to warm up.

Also, is there a factor in play if the plant is annual, biennial or perennial in its growth? And how do woody plants (tree flowers) stack up against herbaceous species?

I’m not saying the last 40 years of record keeping were a waste of time, but any analysis of my blooming data to support or refute climate change will be flawed as I did not track all those variables that are in play to determine plant growth and blooming time.

So keeping in mind that the following is based on weak science here are just a few examples of typical springtime flowers:

Red and white trilliums: one thing has appeared with consistency is that red trilliums break open their buds at least 48 hours ahead of their white cousins.

Of the 389 species that I track, red trilliums are the 17th species to bloom while the white trillium is the 25th to appear in order of blooming dates. Earliest date for red trillium is April 6 (2010) while the latest date was May 10th (2019); this year is was April 27.

Spring beauty: average blooming start for this delicate woodland flower is early April, but in 2012 it was abundantly in bloom on March 20th; latest date was April 26 in 1996 and 1997. This year they appeared on April 17.

Fawn lily (also called trout lily, dog-toothed violet and adder’s-tongue): this yellow bell-shaped blossom pops open in late April, although it was found blooming on April 10 in 2012 and as late as May 5 in 2019; so April 27th this year is not a record breaker.

So to be a phenologist (he or she who studies these relationships of organisms and their environment) is a tough challenge: what at first may appear to be a simple exercise of comparing one calendar to another quickly becomes a detailed exercise (sometimes frustrating) of trying to understand our local botany.

All I know for sure is that the trilliums are shivering this year.

Unique 'swamp monsters' are masters of camouflage
Jul 19, 2020 11:30 AM
Comments
We welcome your feedback and encourage you to share your thoughts. We ask that you be respectful of others and their points of view, refrain from personal attacks and stay on topic. To learn about our commenting policies and how we moderate, please read our Community Guidelines.