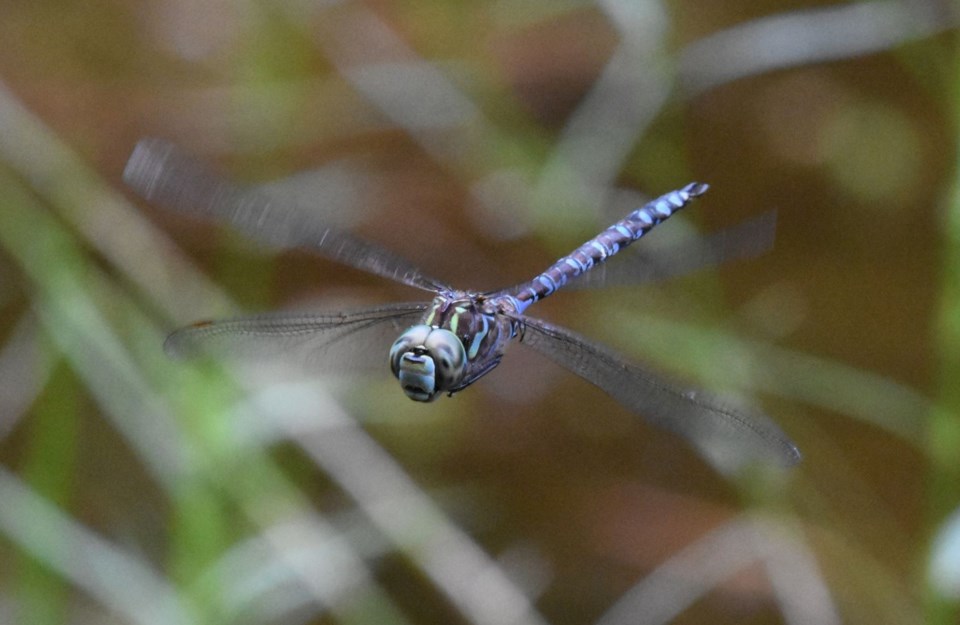 A swamp monster? Nope, it's a dragonfly. This is the peak time to see these flying eating machines. David Hawke/OrilliaMatters

As the Grade 6 class followed me along the winding path down to the edge of the marsh we gave the appearance of a medieval troop of wood gnomes off on a quest.

We were in search of dragons and damsels, predators and prey, things hidden and hiding. Long-handled dip nets bristled forth from every other student while collecting bowls were handled by those in between like careless shields.

Excitement, some of it nervous, was in the air.

Ah, the good old days of field trips and outdoor education. Knowing that the school boards thought that a three-hour field trip once in their entire 13-year education curriculum would prepare them adequately for a lifetime of environmental awareness, we naturalists had to pack a whole lot of memories into that outing.

And where better to do that than in a wetland.

Many of the students were hopeful that they would be the one to net the first frog, maybe a polywog or even a minnow. Occasionally there was one bright one who had heard a tale or two of water snakes and made darn sure as many of his classmates were made aware of this lurking danger (but relax, because he would catch it save the class from certain peril).

After much ado as to who would dip the nets and how to fill the sorting bowls, controlled chaos began as nets were dipped, tossed, thrown and swiped to see what creatures of mystery would be hauled back to the water-filled sorting bowls.

To override the initial disappointment of an ‘empty net’ was the challenge of the leading naturalist, showing them how to poke through a net full of either ‘seaweed’ or mud to find the wee beasties hidden within.

One of the skills that must be mastered by an interpretive naturalist is how to be at a dozen collecting bowls all at the same time!

After a bit of coaching, the class would usually get serious about sorting (and quite competitive about collecting). With 20-some heads looking down in search of water beetles, freshwater scuds, tadpoles, water striders and other black-bodied critters, I could take a bit of a break from teaching and concentrate on supervising.

It was easy to determine from which sorting bowl or dip-net the scream had originated as it was the bowl that had the tight-packed ring of faces jostling for position. “Eww, gross!” “OMG, does it bite?” “Don’t pick it up!” “Mr. Hawke, help us, we found a monster!” “What is it? What is it? What is it?”

Panic and curiosity all bound together.

And there, floundering about the net in great confusion, would be a baby dragonfly. Now a baby dragonfly looks quite different than an adult dragonfly and even if you had noticed the adults flying and flitting about you, the discovery of a young’un is a whole new ballgame. They look, well, like a swamp monster.

The flying adults mate and deposit their eggs either into the water or onto vegetation close to the water surface. The eggs hatch and the larva swim to the bottom of the marsh and hide in the mud.

And these little guys are hungry! Thousands of neighbouring mosquito larva are consumed and the little dragonfly grows and grows, shedding its ‘skin’ with each growth spurt.

Being a hunter, the dragonfly nymphs are masters of camouflage, often being a perfect blend of black and brown to hide amongst the debris of the pond floor.

And being a predator they have very strong jaws for grasping and holding their next meal. If you should wonder what the head of a dragonfly nymph looks like, just watch the Star Wars movies… the mechanical fighting machines of the Empire are based on the shape and function of a dragonfly’s head (but realize that dragonflies don’t actually have blasters… that’s an add-on provided by the film department).

After a summer and a winter, the dragonfly nymphs are ready to get real in their adult world. They climb up a stalk of cattail, split open their exoskeleton, and do a backwards somersault out of it, suddenly finding themselves with wings! “Dude, this is awesome!”

The school visits were usually in May and June, just as the underwater nymphs were quite big but not yet leaving the water. Which meant easy picking for a dip-net swinging 11-year old human.

As time has gone by (where do those decades go) I have gained a better appreciation for and of Odonatas, that group of insects commonly called dragonflies and damselflies.

They come in a multitude of shapes and colours (sometimes confusingly so) and have definite ranges and habitat preferences. Some like a marsh, others a river bottom, a few live along a lake’s shoreline. Just like birds, a few species actually migrate to warmer climes for the winter months.

July and August are the peak months to find these flying ‘eating machines’ and many hours can be spent seeking them out, photographing them, and trying your hand at identification.

An application called SEEK can be installed on your wireless portable telephone communication device, and with a click the identification of your picture’s subject is identified (with about 80% accuracy).

Despite the screams of childhood, dragonflies are totally harmless to humans; even with jaws strong enough for munching deer flies they cannot and do not bite us.

And as an ancient Chinese saying tells us, when a dragonfly lands on you it brings good luck. That luck may simply be a few less deer flies around your head (or a massive lottery win??)… you’d be wise to go outside and discover this for yourself.

Grandson's interest in moths becomes study of life lessons
Jul 26, 2020 11:15 AM
Comments
We welcome your feedback and encourage you to share your thoughts. We ask that you be respectful of others and their points of view, refrain from personal attacks and stay on topic. To learn about our commenting policies and how we moderate, please read our Community Guidelines.