War against invasive plant rages on 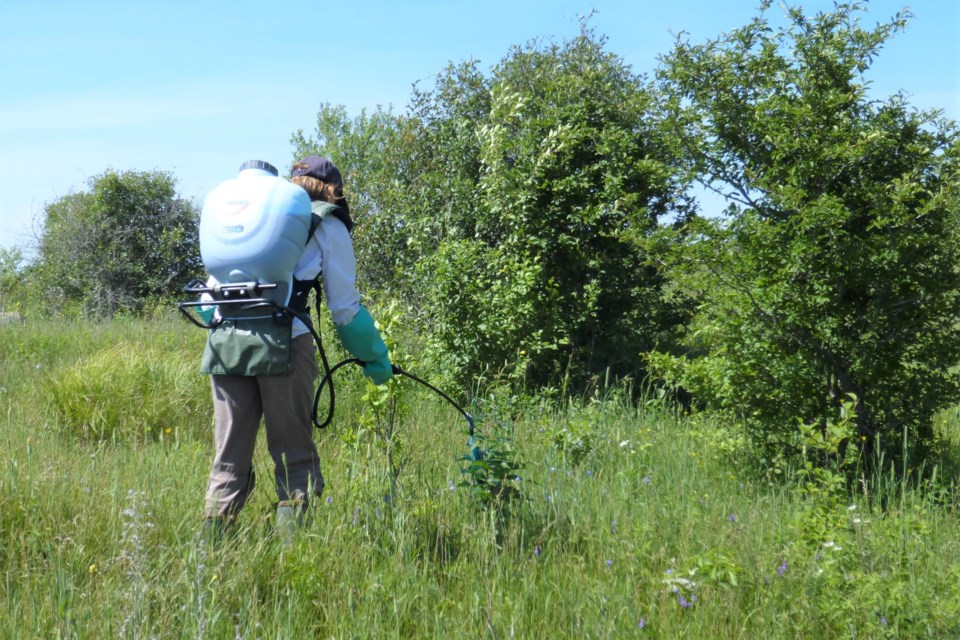 It takes a serious commitment to battle some species of invasive plants. For dog-strangling vine, it requires the final option of chemical application to stop its spread across the landscape. David Hawke/OrilliaMatters

The first wave our attack on the invaders begins tomorrow! They will not survive! They will not expand their range! They will not get by us! Their children will be eliminated! Hey, dog-strangling vine, this is war, and we will not rest while this threat to the landscape remains!

Whew. Rallying the troops takes a lot of exclamation points!

There are now several plant species within our region that are considered to be invasive, plants which come from afar, have steadily dominated the landscape and are now displacing or eliminating native plants from the ecosystem. There are some of us who feel that this is just plain wrong (and, admittedly, there are also those who feel that this is just another step in nature's adaptation and range extensions). But for now, the fight is on!

So, you may ask, just what is the big problem with this particular plant? Several problems, actually, all big. One is that DSV (as we call it in code between ourselves) can take over an area of land very quickly. Once the roots are set, it's there for years to come, and many plants can grow side-by-side. The stem is up to two metres long (that's, like, six feet!) and is a tough, woody, twining thing, wrapping itself around fences, machinery, shrubs and its own neighbour, climbing toward the sun while shading out all that try to grow below it.

Not content to stay in one patch, DSV spreads over the landscape until every inch of soil is covered and the only thing green on the surface are its leaves. Total coverage. I saw this just south of Lindsay, in the Pigeon River Headwaters Conservation Area. Only the planted and tall pine trees had escaped being covered; the roadsides, the meadows, the steambanks, the forests — all completely covered with DSV. It was not a pleasant sight, nor was it a pleasant site. Gave me the willies!

Aside from crowding out native plants and lesser aliens, DSV lures monarch butterflies to their lingering death. Although both plants are in the milkweed family (botanically speaking), only common milkweed can nourish a hungry caterpillar. However, being related, monarch butterflies are sometimes lured to lay their eggs on DSV rather than milkweed. This is a problem as the newly hatched caterpillars either can't eat the tough leaves and stems or can't obtain the nourishment they require, and another generation of monarchs withers and dies.

In order to protect sensitive habitat that is presently free from DSV, a fighting line has been established to prevent its further spread into the nearby Carden Plain, a globally rare habitat that contains some pretty unique native species. Field monitoring had revealed that DSV was nearby and growing in strength, but had not yet established a headquarters within the plain. Here was a battle that could be won, albeit with effort, planning and community support.

The seeds of this plant are much like milkweed seeds, each one with a feathery tuft that rides the autumn wind to new places, eventually snagging on a shrub twig and falling to the ground. In a patch of mature DSV, there are an estimated 28,000 seeds per square metre! Not all will survive to create new plants, but several thousand will. And that's several thousand too many.

Growing plants are sprayed with a herbicide in June, hopefully stopping any flower production before it gets going. The same area is sprayed again (if required) in August to hit the young plants that hid under the first layer and kept on growing.

The third attack is questionable as to its overall effectiveness, but feels good when you do it. This effort involves picking the ripening pods of any plants that have survived and have produced flowers and seeds. The pods look a bit like green beans from the garden, but a tad smaller. You could also say the pods look like mini-milkweed pods.

Hand-picking the pods will stop thousands of potential seeds from taking to the air, which just plain feels good when you strip a handful and toss them in the collecting bag. However, the plant is still alive, and next year will grow, produce flowers and pods, and you have to come back, again and again, year after year. Which is why we use a chemical spray to kill the plants. As intimidating as this may sound, every effort to thwart the further spread of DSV is a good effort.

We on the front line of defence admit this is a losing war, that DSV will always be ‘out there’ lurking in a fence line somewhere. It’s not going to go away. But if we can control the spread and density, thus saving the more sensitive and ecologically unique parts of the landscape, then so we shall!

On your late-summer and early-fall hikes, pack a couple of shopping bags to shove full of DSV pods, should you encounter any. You will most likely encounter it on open, sunny trail sides, especially along the old railway beds. Put the bag and pods in the garbage, rather than in any compost facility, thus ensuring the seeds are buried and entombed in plastic.

Oh, and that name, dog-strangling vine: sure catches your attention quicker than its regular common name of pale swallow-wort, doesn't it? So, eyes open, stay vigilant, and have at ’em!

It's so hot, even moose are looking for ways to cool off
Jun 29, 2020 4:45 PM
Comments
We welcome your feedback and encourage you to share your thoughts. We ask that you be respectful of others and their points of view, refrain from personal attacks and stay on topic. To learn about our commenting policies and how we moderate, please read our Community Guidelines.