While our current regulations are demanding we all stay at home, an exercise-based walk-about will let you observe much of the spring migration
Apr 11, 2021 11:30 AM By: David Hawke 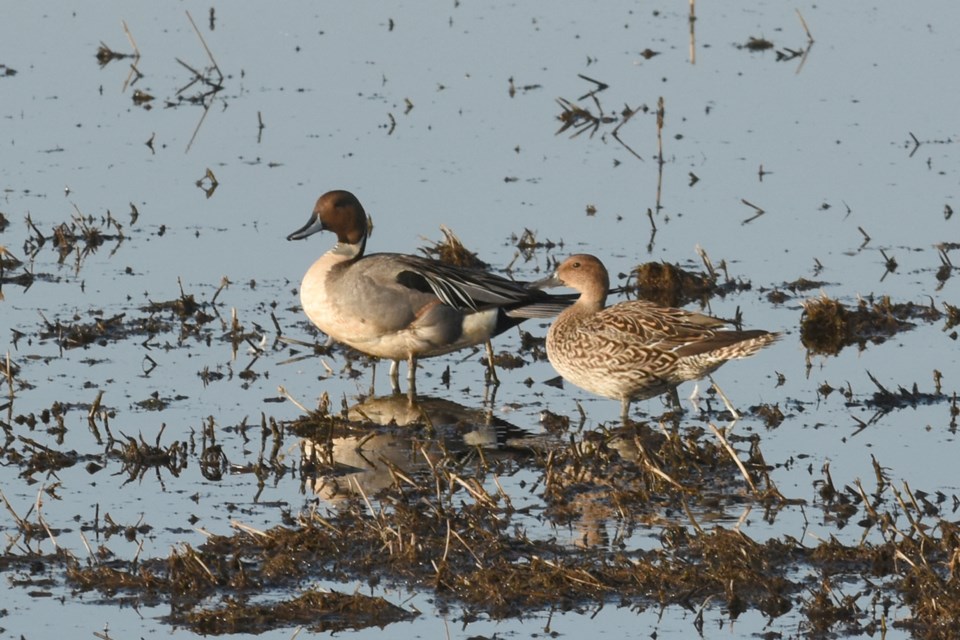 A pair of Northern Pintail are pictured at a local wetland area.David Hawke/OrilliaMatters

The annual spring bird migration is fully underway, and with it comes the opportunity to witness this very dynamic natural event. For those of us who are environmentally curious, birdwatching provides an easy escape from ‘COVID reality’ into the world of ornithology.

Whether you observe these fluctuations of bird abundance and species representation within your backyard or by attending known hot-spots, there is an undeniable excitement that comes with encountering a ‘lifer’, a species that you have found for the first time in your life as a birder.

Depending on the group of birds that you are seeking, there are windows of opportunity, or waves, as to when the birds which spent their winters in the sunny south start to traverse our local habitats.

First are the sparrows and finches in February and March, then comes the waterfowl in March and April, followed by the warblers in April and May. These schedules are tied to their preferences of food source and habitat availability.

Currently the waterfowl (ducks, geese and swans) are providing a spectacular display of life returning to our local wetlands. Some of these web-footed species will be nesting right here while others within the flock are only part-way home, heading either to the Hudson Bay lowlands or the prairie pothole regions of Canada.

Canada geese, trumpeter swans, mallards, wood ducks and blue-winged teal will be seeking a home territory within the nearby cattail marshes and farm fields. Northern pintails, shovelers, green-winged teal and others are pushing onwards.

Ducks have been grouped depending on their feeding and take-off characteristics. There are dabblers, which feed on the surface and take off by exploding straight up (handy in a tree covered swamp), and there are divers, which like open waters and need to take a running start to get airborne.

For some reason the divers tend to be black and white in coloration, with scaup, bufflehead and common mergansers comprising the majority of these open water birds.

Dabblers often sport an array of very colourful plumage, with wood ducks and mallards coming to mind; this patterning helps them camouflage within the splotchy shade of the beaver pond.

On a recent drive-by birding tour, I found several northern pintails mixed in with several other species. Pintails are a rather exquisite looking bird, having a tall and slender neck balanced with a long and pointed tail.

In my years of experience, it has shown that pintails can be fairly readily seen in the spring migration but rarely encountered in the fall flow of the southbound migration. What’s up with that? Read on.

When the big map of waterfowl flyways is studied there are four main “Highway 400’s” that go north-south across North America: the Atlantic, the Mississippi, the Central and the Pacific, with Southern Ontario being within the Atlantic flyway.

As ducks head north from Texas, Cuba, Florida and South Carolina they come up the Atlantic Flyway and weave their path either over or around the southern Great Lakes and the St. Lawrence River. As mentioned, some will stop here and set up nesting while others push further north and west.

Pintails nest along the shore of Hudson Bay and commonly in the Canadian prairie regions. When they travel south in the fall, they tend to follow the Mississippi or Central Flyways, thus detouring around southern Ontario. Harvest records from duck hunters rarely produce a pintail in this area.

While our current ‘lock down’ regulations are demanding we all stay at home, an exercise-based walk-about will let you observe much of the spring migration. And don’t forget to look down occasionally, as the spring wildflowers are also popping open!

Woodpecker's percussion skills eliminate need for alarm clock
May 9, 2021 11:45 AM