What is that skulking, flitting, shy bundle of feathers?

It takes patience and a good eye to identify 'little brown birds,' notes outdoors columnist
0
Apr 7, 2019 11:00 AM By: David Hawke 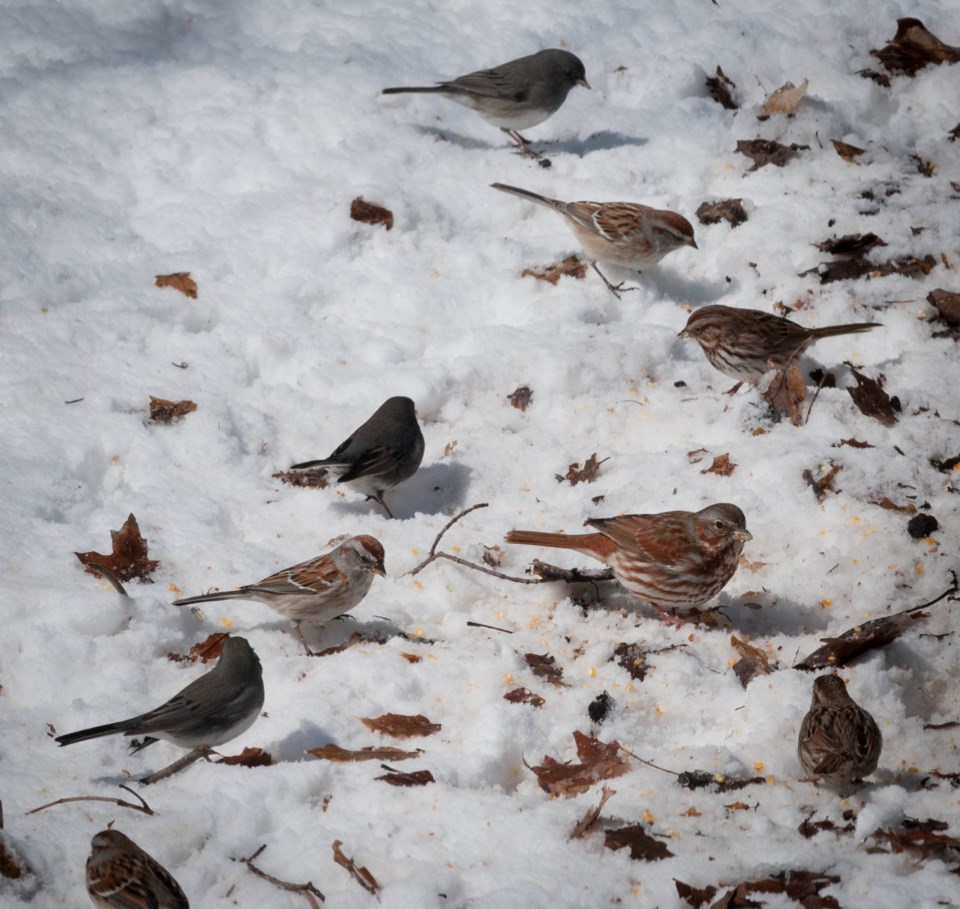 Sparrows on the ground beneath the bird feeder mark the beginning of a new season. David Hawke/OrilliaMatters

The snowbanks are melting, tree sap is running, puddles are ripe for splashing and the annual springtime mess under the bird feeders is once again revealed.

The abundance of uneaten millet seeds makes one wonder why did I put out mixed seeds anyway? It seems that only the sunflower seeds were enjoyed.

However there does appear to be a renewed interest in these spilled seeds as each morning a flock of LBBs ("little brown birds", as is oft reported by birdwatchers who can't quite get a positive identification on the skulking, flitting, shy bundle of feathers seen moving through the shadows of a thicket).

With a bit of patience and some quick maneuvering of the binoculars their field marks can eventually be picked out and a match found in the field guide.

The past few days the backyard has been populated with five song sparrows, 15 tree sparrows, three fox sparrows and a single common redpoll. Add in a few juncos, a pair of chickadees, and at least two goldfinches and you can imagine the seething mass of birdlife outside the kitchen window.

As none of them sit still it becomes a visual blend of several shades of brown and white, making it tempting to record them as LBBs. But we persevere and eventually get the daily tally.

The tree and fox sparrows are heading into northern Ontario to set up breeding territories and nesting sites.

Both species have to follow the line of melting snow as it recedes northward, picking up whatever seeds they can find along the way to fuel them in their migration.

The first birds back to the breeding grounds get the first pick of the best nesting sites. Yes, life is always a competition.

I checked with O.E. Devitt's book The Birds of Simcoe County (published 1967) and found that fox sparrows typically move through our backyards in early April, and only for a couple weeks. He records the earliest spring arrival date as March 30, 1961.

I then checked our own backyard bird records and note that in 21 years of peering out the window, we have noted fox sparrows for only 10 of those years, with this year being the earliest spring date at March 31.

There is a note in Devitt's book that back in 1904 the fox sparrow was "a rare and transient visitant at Penetanguishene."

Compare those records to the tree sparrow, which is also a north-bound migrant, and we find that this species is observed all winter long in Simcoe County, and often in large numbers.

By the end of April, both the fox and tree sparrows will be well on their way respectively to the tiaga of the Hudson Bay lowlands or the thick spruce forests of boreal Ontario.

The third type of sparrow, the song sparrow, is a welcome addition to the feathered throng, as his melodious call is one of the sure signs of spring.

Rarely overwintering in cottage country, it shows up as the sap begins to flow and the snow has melted just enough to reveal patches of open ground. There is a giant pile of fallen branches beside our feeders and the song sparrows hunker down inside if a late winter storm blows through.

There is a concern raised time-to-time as to the influence that bird feeding stations have on migratory species.

Does the easy pickings lure birds to stay and hang about the neighbourhood when, really, they should be hiking it on up the map? From the research I've looked at the answer is, generally, no.

It's a soft "no" as, using tree sparrows as an example, the population of birds will respond to the lengthened days and the hormonal drive to find a mate, claim a territory and build a nest.

Overall this internal drive trumps an another day hanging around the bird feeder in southern Ontario. However, individual birds (like individual humans) may opt to do so, taking the free meal now and accepting the risk of losing out on the prime real estate.

Bottom line is that "most" of the population has the drive to get up north and get to family business. Same with the autumn southbound leg of the journey, when shorter days send signals to their brains to vamoose to warmer climes (another shared trait with humans?).

As you wander further and longer with your spring outings, watch the thickets, look in the shadows, be aware of quick movements out the corner of your eye... for these are the sparrows marking the arrival of a new season.

Pesky moles are nature's perfect tunneling machine
May 17, 2020 11:15 AM
Comments
We welcome your feedback and encourage you to share your thoughts. We ask that you be respectful of others and their points of view, refrain from personal attacks and stay on topic. To learn about our commenting policies and how we moderate, please read our Community Guidelines.