Woodpeckers love to use TV aerials as a tool to proclaim their nesting grounds, but the 'heavy metal' era may be ending, says outdoors columnist
May 9, 2021 11:45 AM By: David Hawke 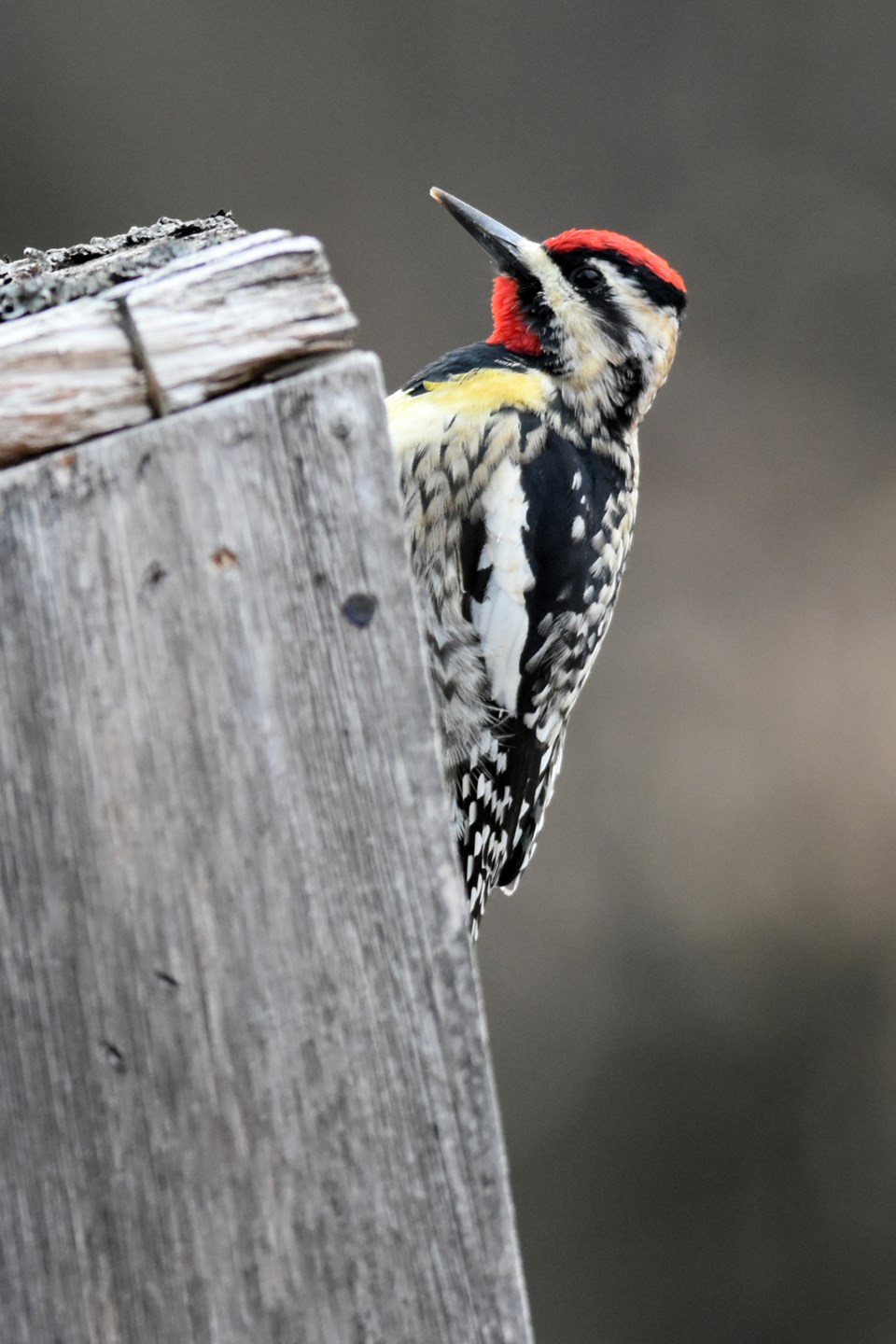 A yellow-bellied sapsucker can double as an alarm clock. This one, every morning at 6:45 a.m., springs into action and the house sounds like it's under attack from machine gun fire. David Hawke/OrilliaMatters

It's 6:30 a.m. and Lea remains snuggled in her bed, partially awake yet still a bit in slumber-land. Her alarm clock is not set, as it's not needed. BBBBRRRRAAANNGGG!! Right on time. Woodrow has returned.

Lea is a friend of mine and Woodrow is a yellow-bellied sapsucker. They have an interesting relationship. Just outside her bedroom window is the metal antenna mast for their TV, and each morning the little woodpecker comes visiting as part of his land claim ritual.

You, too, may have heard the woodpeckers in your neighbourhood signaling to each other, tapping a rapid drum-roll of sound from the tip of a dead branch. Woodpeckers do not have a warbling song to delight all who listen, so they have devised a way to let their percussionary skills talk for them.

Just as the oriole or robin flies from tree to tree and post to post around the perimeter of his territory, stopping to sing a bit to let others know where his "fence" is situated, woodpeckers do so by drumming.

Drumming is done most often by downy woodpeckers and yellow-bellied sapsuckers, but both hairy and pileated woodpeckers will also do so when the spirit moves them.

Lea remarks that during her early morning walk through the wooded neighbourhood the drum rolls of several sapsuckers can be heard as one answers another.

To produce this fast staccato sound requires a special stick, as not just any branch will do. A broken and dried tip of a branch often will produce just the right resonance, while a bark covered branch might produce only a muffled ticking sound.

The head moves at such a high speed that the beak and eyes are blurred to our vision. The roll doesn't last long, just a second or two, but will be repeated several times. Then the bird flies to next drumming post as it circles its territory.

Starting in the late 1950s, humans bought into a craze that still holds the attention of most -- television. In the early years an indoor set of 'rabbit ears' sufficed as a signal receiver.

But soon the rooftops of suburbia began to sprout metal trees as the race was on to get more channels and better reception than the neighbours. The birds immediately took to the shiny branches as a place to roost, rest and 'let fly'.

One day an inquisitive woodpecker, who was establishing his territory, decided to give one the funny metal branches a whack with his beak, and heavy metal music came to the woodpecker world. Such resonance! Such tone! Such volume!

For about five decades, woodpeckers used TV aerials as a tool to proclaim their nesting grounds. However, these days as we humans shift our quirky reception demands from outdoor antenna to indoor cable and plastic satellite dishes, the metal poles are coming down. Disappearing is the Age of Metal Drumming in the history of woodpeckers.

Another part of your house's anatomy that a woodpecker may find intriguing is aluminum or vinyl siding. Although this usually doesn't give the necessary resonance required for a good drum roll, it does sound hollow when tapped.

An experienced woodpecker knows that when a tree trunk is tapped and an echo comes back, there is a good chance that food awaits inside. Wood is then rapidly removed and a feast of carpenter ants may be had.

So when your siding is whacked upon, the basic need for food seems to be within grasp for a woodpecker, and your house soon becomes an echo chamber as it is being riddled by a persistent (but frustrated) hairy woodpecker or yellow-shafted flicker.

Note that these actions will not last too long. The drum rolls are usually done in May and will taper off as nesting actually gets underway. Such is the case with Lea and Woodrow -- he can no longer be trusted to replace the alarm clock.

And if there is no reward for energy expended, the flicker which has been rat-a-tating your siding will soon give up and go back to ripping apart well-rotted stumps that are actually filled with juicy grubs.

Heavy metal woodpeckers. Something to tell your grandkids about.