OPP also say that there have been no confirmed sightings in Ontario; Police will follow up on all tips
Aug 2, 2019 12:33 PM By: OrilliaMatters Staff 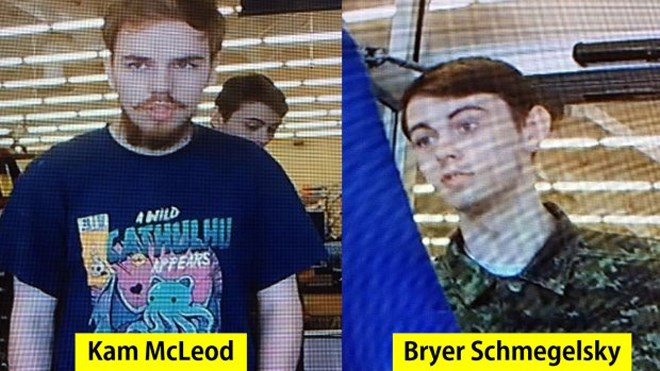 Murder suspects Kam McLeod, 19, and Bryer Schmegelsky, 18, are the subject of a nation-wide manhunt, wanted for the murders of three people in B.C. They have not been seen since July 22 in Manitoba. (Supplied)

NEWS RELEASE
ONTARIO PROVINCIAL POLICE
**************************
The Ontario Provincial Police (OPP) is currently investigating numerous reports from across the province of suspicious vehicles and or young males believed to be the British Columbia homicide suspects.

The OPP continues to work with members of the Royal Canadian Mounted Police (RCMP) and has assigned an investigative team, under the direction of Detective Inspector Matt Watson, Criminal Investigation Branch (CIB) to follow up on all tips received.

At this time, the OPP cannot confirm that any of these sightings are of the suspects, Bryer Schmegelsky, 18, and Kam Mcleod, 19, nor has there been any confirmed sighting in Ontario.

Members of the public should be vigilant of their personal safety at all time. These two suspects are considered dangerous. If observed, do not approach them and call police immediately.

Any person with information regarding this investigation should immediately contact the OPP at 1-888-310-1122 or call 9-1-1. Do NOT report on social media as valuable time is lost should it be a confirmed sighting.