Eight charges are issued, including one person who was charged with several drinking and boating offences and other Canada Shipping Act charges
Jul 3, 2018 5:30 PM By: OrilliaMatters Staff 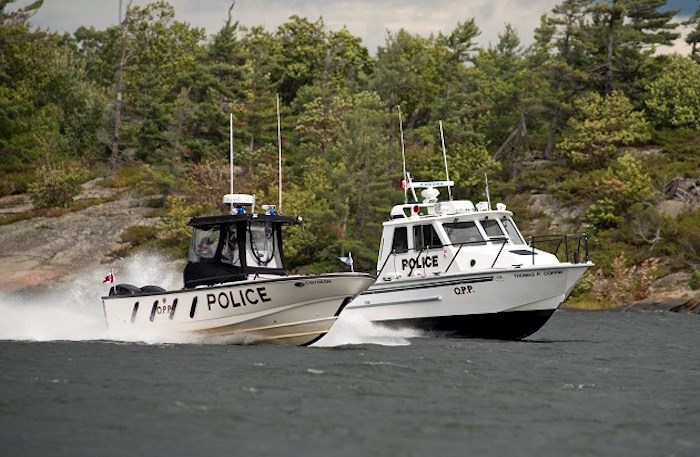 NEWS RELEASE
ONTARIO PROVINCIAL POLICE
*************************
MIDLAND, ON - Members of the Marine Patrol attached to the Southern Georgian Bay Detachment of the Ontario Provincial Police (OPP) were busy checking area boaters for proper vessel equipment and driver sobriety while on patrol aboard the OPP patrol vessel 24' Boston Whaler over the Canada Day weekend of June 29-July 2, 2018.

Officers stopped and checked 50 vessels during their 35 hours of patrol on Georgian Bay resulting in eight charges under the Canada Shipping Act. Three of those charges were issued for insufficient life jackets to kayakers paddling along the Tiny Township shoreline.

Another two charges were issued to vessel operators under the Liquor Licence Act one being near Beckwith Island and the other in Penetanguishene Bay to the operator of a pontoon boat with eight persons aboard. The operators of these vessels were also given Alcohol Screening Device (ASD) tests to check their sobriety.

Marine officers assisted the Joint Rescue Coordination Center (JRCC) on June 28, 2018 at 9:14 a.m. along with the Anishinabek Police Service (APS) searching for an possible missing person who was last scene on June 27, 2018 paddling a canoe between Cedar Point and Christian Island after an overturned canoe was located adrift in that area. The male canoeist was located in good health.

On June 30, 2018 officers responded to two complaints of personal water craft (PWC) chasing water fowl, one at 9:42 a.m. in Penetanguishene Bay and the second at 7:40 p.m. in White's Bay, Gloucester Pool resulting in charges under the Canada Shipping Act to be issued.

Officers responded in the afternoon of June 30,2018 to reports of careless operation of (PWC's) and excessive noise by power boaters in Fairlane Lake, Tiny Township.

Officers did stop a vessel at 12:20 a.m. on July 1, 2018 in the area of Deer Island Channel, waters of Georgian Bay for a Canada Shipping Act violation. The vessel operator was spoken to by the officers and a drinking and driving investigation was commenced resulting in the two passengers being transported safely to shore and the male operator being transported to the Midland Town Dock and further onto Southern Georgian Bay Detachment for further investigation.

His driving privileges have been suspended for 90 days under the Administrative Drivers Licence Suspension (ADLS). He was released from police custody on a recognizance to appear before the Ontario Court of Justice in Midland on July 12, 2018.

Officers crewing the OPP patrol vessel's remind all vessel operators that they are checking for vessel equipment and for liquor offences which they are vigorously enforcing in an effort to reduce injuries and fatalities on our area waterways this summer. For more information on safe vessel operation and equipment please view the following web sites.

Police remind motorists that an essential part of the enforcement job is to save lives and reduce injuries on our trails, roadways and waterways. Educating the public about safe driving practices is a priority.