'It’s unfortunate that people had to see those markings and the words he chose to use,' says police official
Jun 30, 2020 5:15 PM By: Jessica Owen 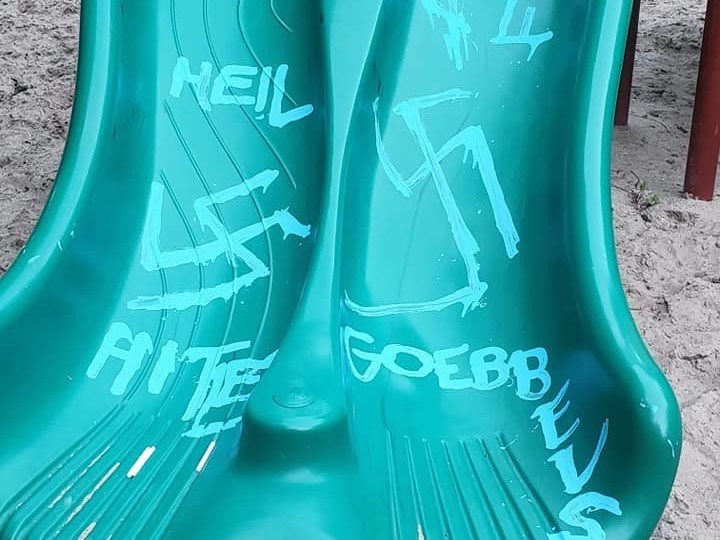 Racist graffiti was painted on playground equipment in downtown Barrie early Monday morning. A Barrie man has been charged with mischief in relation to the crime. Twitter photo

A 50-year-old Barrie man has been charged with nine counts of mischief under $5,000 for allegedly spraying anti-Semitic graffiti in Barrie’s downtown.

City police received the call at about 12:30 a.m., Monday, concerning racist graffiti being painted at Berczy Park Playground, as well as two other locations on Simcoe Street.

“This individual was observed as early as about 11:30 p.m. A witness was able to provide a very thorough and detailed description of the suspect. Our officers knew exactly who it was they were looking for,” said Peter Leon, communications co-ordinator for Barrie police.

Leon said the suspect was known to the police, although the incident is being considered an isolated case.

The suspect was located and arrested without incident on Dunlop Street.

Police say he was in possession of paint and brushes.

“Thankfully, someone realized what was going on and called it in,” Leon said.

City workers were able to jump to action and clean up most of the public locations on Tuesday, Leon said.

“It’s unfortunate that people had to see those markings and the words he chose to use,” he said. “He’s being held accountable for what he did.”

Leon said the accused, whose name was not released, is being held at Central North Correctional Centre after a bail hearing on Tuesday morning.