86-year-old woman required surgery for her broken hip and remains in hospital with the life-altering injury
Sep 16, 2019 4:30 PM By: Erika Engel 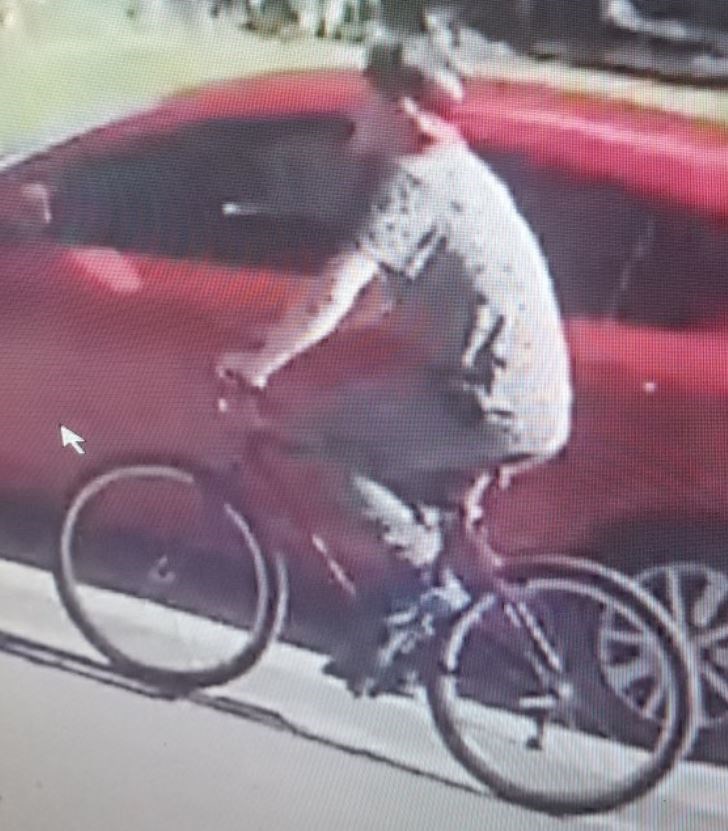 This photo of the suspect in the Market Lane mugging was supplied by OPP.

A local senior is in hospital with a broken hip after a suspect on a bicycle snatched her purse, throwing her off balance and causing her to fall.

The 86-year-old woman was walking back to her apartment from Giant Tiger on Saturday afternoon (Sept. 14) when police report an unknown suspect knocked her to the ground and stole her purse. She was on Market Lane at the time.

Jennifer Lougheed, the niece of the victim, said the suspect was on a bike and approached her aunt from behind. She said she suspects her aunt was carrying her purse in one hand and her cane and shopping bag in other. She thought the force of someone grabbing her aunt’s purse from her hand knocked her over.

Lougheed said her Aunt Marion is a small woman at 4 feet tall and weighing about 85 pounds.

Marion suffered a broken hip as a result of the fall and is at Collingwood General and Marine Hospital recovering from surgery today.

Lougheed asked not to reveal her aunt’s last name publicly due to her safety.

Marion, she spent her career in Toronto working for a credit bureau and she moved to Collingwood to be near family around 1985. Lougheed said her aunt never married.

“She’s a spinster,” said Lougheed, adding she and her two sisters are close to their aunt. “We’re all the family she has.”

Marion lives on her own with her cat, though Lougheed said Saturday’s mugging may change that.

“I don’t know if that’s ever going to happen again, to be honest,” said Lougheed.

Lougheed said she was raised in the Singhampton area and she and her sisters still live in the region. They were at the hospital within half an hour of learning their aunt was injured in a mugging.

Police have not confirmed the sex of the suspect.

Lougheed said her aunt cried out and there were people nearby who heard and called 911. Two residents in the area came forward immediately to say they had security cameras at their home.

Police have released an image from the security cameras, and are asking for anyone with information on the identity of the person in the footage to come forward.

“It’s unbelievable this happened in what we thought of as our small town,” said Lougheed. “It’s shaken the entire neighbourhood for sure.”

She’s also urging anyone with information to come forward, and for people to look at the image to see if they can recognize the person in it. She also has a petition for the person who mugged her aunt and left her injured on the sidewalk.

“Do the right thing, buddy,” she said. “I don’t think his intent was to knock her down. He could have stopped … he could have been a good samaritan, instead, he’s a criminal.”

Crime Stoppers does not subscribe to call display and you will remain anonymous. Being anonymous, you will not testify in court and your information may lead to a cash reward of up to $2,000. You can follow Crime Stoppers of Simcoe Dufferin Muskoka or Grey-Bruce on Twitter or Facebook.