There is evidence indicating two people did, in fact, fall into the frigid waters of Georgian Bay, OPP say
Jan 18, 2021 1:10 PM By: Andrew Philips 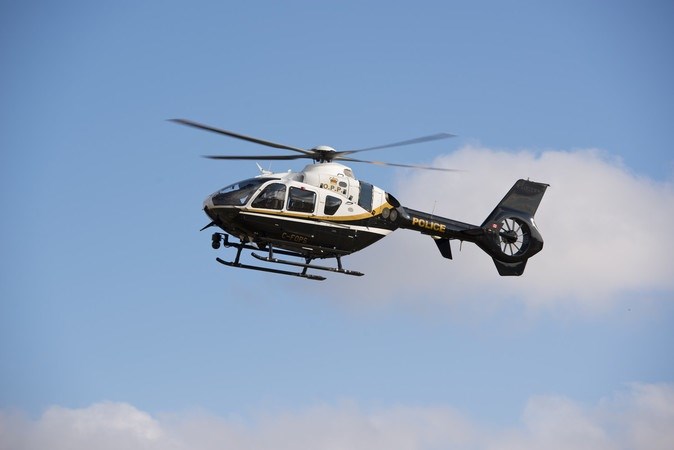 An OPP helicopter has been called in to help with search and rescue efforts near Victoria Harbour. File photo.

UPDATE (1 p.m.)
Shortly after 11 a.m. Monday, OPP divers located two deceased persons in the waters of Sturgeon Bay and returned them to shore for further investigation.

The names of the deceased are being withheld pending positive identification and notification of next of kin.

The investigation continues into the cause of the mishap.

OPP search and rescue crews are in Victoria Harbour today searching for two people who went through the ice Sunday.

“Police, fire and ambulance attended and searched the area, but to no avail,” Hobson said.

“Searching stopped at about 8:30 because of darkness and treacherous conditions.”

#OPPAviation on scene assisting with the search for two outstanding parties. ^in pic.twitter.com/I21CfFvQPE

Hobson said the search resumed at 9:30 this morning with an OPP helicopter and an underwater search and rescue team joining officers at the scene.

“Tay firefighters are standing by as well to assist,” said Hobson, who noted that while police have not made any recoveries as of yet, they have seen evidence indicating two people did, in fact, fall into the frigid waters of Georgian Bay.

Also on Sunday, the OPP received a call at 2 p.m. saying that someone driving a snowmobile had gone through the ice off Midland Point near Simpresca Road.

“Penetanguishene Fire attended and were able to remove a person from the water, who was transported to Georgian Bay General Hospital for treatment," Hobson said.