Self-isolation is becoming a struggle for local seniors

One man said isolation is depleting, while another senior says: 'Aside from the terror of dying, I'm having the time of my life'
Apr 7, 2020 12:45 PM By: Mehreen Shahid 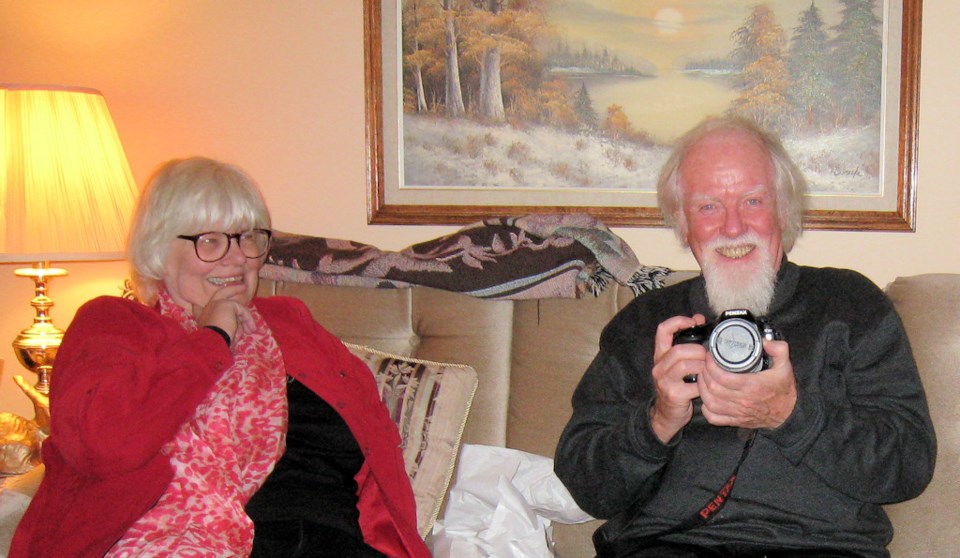 Vicki and Bill Sherwood, of Orillia, are currently self-isolating in their condo. They occasionally go out for walks and bird watching in Tudhope Park. Contributed photo

Self-isolation is like being in prison - at least it is for seniors isolating on their own.

“If I didn't have my phone to tell me what day and date it is, I would be completely lost,” said Dav Langstroth. “I have a radio, but they're not in the habit of announcing the day and date very often.”

The 64-year-old, who lives on his own in Orillia, has been avoiding the outdoors like the plague - or COVID-19 - and it’s been getting progressively harder, he said.

“You wake up in the morning and you're happy with the gift of the day,” said Langstroth. “On the other hand, what are you going to do with that gift?”

It’s difficult on both a physical and mental level, he said.

“Physically, it's depleting me," said Langstroth, who has emphysema, asthma, and chronic obstructive pulmonary disease (COPD). “My favourite sport is eating. And really what else is there to do right now? Could I eat less? Yes. Do I want to? Yes. Am I eating less? No, because I'm bored,” he added.

Langstroth described himself as a gregarious person.

“That's one big thing I miss ... talking to other people,” he said. “I used to walk up the street and talk to people at Mariposa Market as I ate a meal and sometimes invite them to eat with me and buy them a meal.

"I enjoyed watching little children buzz around with their energy of life. I enjoyed talking to young people in all their glory. I can't do any of that now," he said.

And virtual meetings aren’t anything like an in-person connection, said Langstroth, adding he has been spending his non-eating time reading books and watching and re-watching any DVDs he has at his apartment.

“I've seen some of the worst movies,” he said, adding with a laugh that the Alien vs. Predator series was probably the worst one he had watched. “The Star Wars original series is enjoyable to watch.”

Where Langstroth is finding technology helpful but still lacking, Lesley Bridges said she thinks it’s key for people staying in touch in these times.

“Fortunately, we're (all) pretty well connected via email, phones, texting, Facebook messaging,” said the 66-year-old Severn resident talking about how she is staying in touch with her friends and relatives while in self-isolation.

Unlike Langstroth, Bridges said she is an introvert and being indoors doesn’t really bother her.

“Aside from the terror of dying, I'm having the time of my life. I'm reading books, I'm knitting, crocheting, and even writing a book," said Bridges.

But Bridges, like many others, also seeks physical affection in her interactions with people.

“I remember that the last hug I had from somebody other than my husband was on March 11,” she said.

Bridges and her 71-year-old husband, John Tyerman, both are physically vulnerable to the disease.

“I have a bit of a compromised immune system; my lungs aren't too strong,” she said, adding Tyerman is in good health otherwise, but he had a brain injury a few years ago and was going to a support group every Wednesday.

Where most other ways of human interaction have changed, Bridges said their way of interacting with their grandkids has also changed.

“We had a lovely window visit with our grandkids,” she said. “My daughter drives into our driveway and they stay in the car and we call each other on the phone and just look at them through the window.”

While Bridges has her grandchildren in a nearby town, Vicki Sherwood and her husband Bill Sherwood are used to communicating with their kids over the internet.

“Bill and I get on pretty well, and we don't get in each other's hair too often,” she said. “But I do notice that there is a bit of feeling of cabin fever, even though we do try and get out for a walk every other day.”

Being in a retirement condo building on Atherley Road, they have access to both the Tudhope Park and Leacock Museum property. And that is helpful because the condo management has closed off the pool, fitness room, and sauna inside the building.

“We can still go out and bird watch and take photos,” said Vicki.

Aside from that, she said, the two have been out to Zehrs a couple times to pick up groceries.

“Living in a condo, we don't have an awful lot of space, so we have to go out every two weeks,” Vicki said. “We're very careful when we do so. I wear gloves when we're shopping and try not to touch anything with my bare hands.

“I don't have a mask,” she added. “I've wondered about putting a bandana over my mouth, but I'd look like a bandit.”

What is helping her get through this time of self-isolation and quarantine is her exposure to the medical field.

“My daughter works for the German health ministry, she's a microbiologist,” said Vicki, who is an astronomer. “My younger sister was a nurse, and I've grown up around a lot of medical information, so I understand the seriousness of this.”

And she said she thinks everybody should obey the rules.

“It's just unconscionable to take a risk and infect everyone else,” said Vicki.

Bridges said she’s been finding solace in books and philosophy.

“This is a big philosophical change for all of us,” she said. “I grew up with parents who lived through the depression and war. I grew up with the philosophy of the common good and the state of humanity. The planet is in pretty bad shape right now and it doesn't want so many of us.

“So (for me) the most important thing is planet first, humanity second, and individuals last,” added Bridges, “and that gives me a sense of purpose at home.”

Langstroth, a News Brunswick Waabaana'ke and Canadian military vet, says he falls back on his training and traditions in such times.

“The decontamination drills we did in the military come in very handy,” he said. “I'm very watchful and careful. I wipe down my grocery and try to be particularly careful of plastic surfaces and clean my gloves and my mask.”

Those are skill sets he wouldn't have had if he hadn't spent 26 years in the military, said Langstroth.

“The (traditional) teachings I've been given hold me in good stead,” he said. “They tell me that life is a journey and that at any time we could begin our next journey and that it is not something to fear.”

When dealing with death, a sense of humour helps: local seniors
Feb 4, 2020 12:30 PM
Comments
We welcome your feedback and encourage you to share your thoughts. We ask that you be respectful of others and their points of view, refrain from personal attacks and stay on topic. To learn about our commenting policies and how we moderate, please read our Community Guidelines.