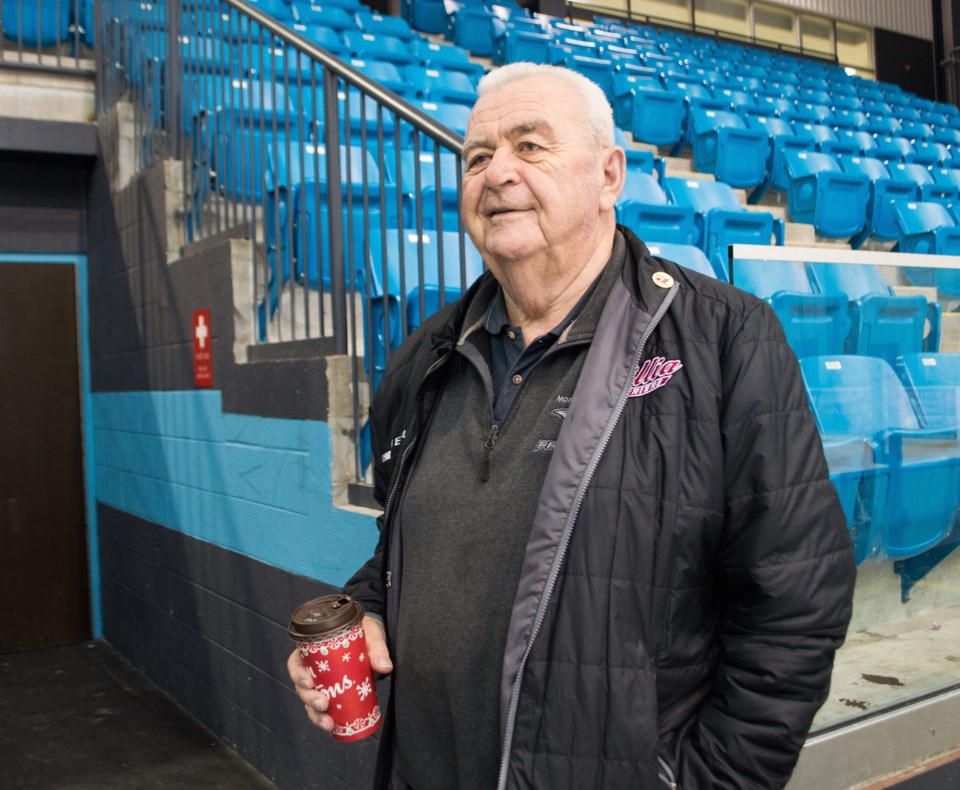 Dave Dunn has been dedicated to volunteering within the hockey community in Orillia for close to 35 years. Dunn can be found at the rink at every Orillia Terriers game and practice even on the coldest winter's night. Tyler Evans/OrilliaMatters

Local hockey volunteer Dave Dunn holds the title of registrar for both the Orillia Terriers Jr. C hockey team and the North Central Predators AAA organization, but according to Terriers general manager Andrew McDonald, Dunn does much more than his title implies.

"He does everything from banking and treasury, registering players, he helps me hang curtains, he helps me run around on game night, he helps with the 50/50,” McDonald explained. “He is never standing still. He is always doing something that helps us and makes us a better team.”

The 74-year-old Dunn has been volunteering at hockey rinks in Orillia since the mid-1980s when he was transferred by the Ontario Provincial Police (OPP) from Toronto.

Once Dunn’s son, Darrin, started playing in the Orillia Minor Hockey Association (OMHA), Dunn thought it would be a good idea to get involved. Over time, he served as a director on the board and even became the president of the association.

When the Ontario Junior A Hockey League folded in 1986, it forced the Orillia Travelways out of business. One year later, Dunn was part of the group that was responsible for bringing junior hockey back to Orillia with the Jr. B Orillia Laidlaws.

Dunn has had his fingerprints on every junior hockey team that has come and gone since.

Dunn’s commitment to junior hockey is substantial. It is rare that he misses a game or practice and that’s been the case for nearly 34 years; Dunn can be found at the rink even on nights where it’s minus 20 and a snowstorm.

“I missed a game once when my wife had previous arrangements, and it was in my better interest to do what she had planned,” Dunn chuckled.

Dunn never played organized hockey as a kid. He grew up in the west end of Toronto playing shinny with his friends, but that was the extent of his hockey-playing career.

But he has a passion for the game and his adopted hometown.

“I like the good bunch of kids we usually have here. I find it enjoyable to be around.”

Dunn also enjoys watching the kids grow and being part of the tight-knit community that surrounds the game.

“There is a real camaraderie here,” said Dunn. “In a recent game on New Year's Eve we had Daryl Bat who played for the Terriers years ago, and some of the fellas who were on the team back then like Jason Pinizotto, Dave Wrigley and Mike Hanna who were all here watching."

The memory brings a smile to his face.

In Dunn’s tenure around the game, he’s seen many talented players come and go, and he’s even seen players go on to reach their ultimate goal.

“We’ve had some good players like Fred Braithwaite, who was a goaltender and is now involved with Hockey Canada as a goaltender instructor, Brent Burns was here, Dan Girardi, and without their short stay here maybe they wouldn’t have made it,” Dunn said of the players who went on to play in the NHL.

When Dunn encounters former players who have gone on to have successful hockey careers or even just a successful, happy and healthy life, that is when he feels rewarded for his time as a volunteer.

“They get their feet on the ground here and if we can help them then, it’s great. Not all of them are going to make it, that is for sure, but we do our best to help them,” he said.

Dudas, who is from Parry Sound, played AAA hockey with the Predators in Rama because it was the closest place for him to play at that level. Without volunteers like Dunn, it’s hard to imagine how difficult it would have been for a player like Dudas to get his career started.

“It’s great that we can help kids stay involved. To do it, you need people because it doesn’t run by itself,” Dunn said, underlining the importance of volunteering.

Dunn’s volunteering has rubbed off on his family.

His wife, Liz, has helped with the Terriers throughout the years and was always a familiar face at the ticket gate and assisted with fundraising; she is also involved with the Orillia Channel Cats.

Their son, Darrin, is the president of the Orillia Hawks Girls Hockey Association and their daughter, Carrie, is on the Orillia Scottish Festival committee and also helps out with the Predators and Hawks.

Dunn is thrilled with his family’s involvement in the community and says volunteers are crucial to keep local teams, clubs, and events alive.

“Things have changed,” said Dunn. “It’s not a small community anymore. You got people here who work in Toronto now and by the time they get home in the evening they don’t have the time to get involved.”

Before retiring from his 30-year career in the OPP in 1996, Dunn used to use his overtime to make time for junior hockey.

“The OPP liked community involvement and I would bank overtime and be compensated with the time back or cash and I would use that time to be with the hockey team,” he said.

Dunn is not one who likes to be recognized or rewarded for the time he’s donated to the community; it’s not why he does it.

However, McDonald says guys like Dave Dunn are the reason junior hockey survives.

“The amount of time that he gives as a volunteer is unbelievable,” said the Terriers’ GM. “It’s gone on for decades. It’s been a part of his life since he came up from Toronto … the Dunn family is a fixture in Orillia hockey and we are better for it.”