Honouring the incredible legacy of the SS Keewatin 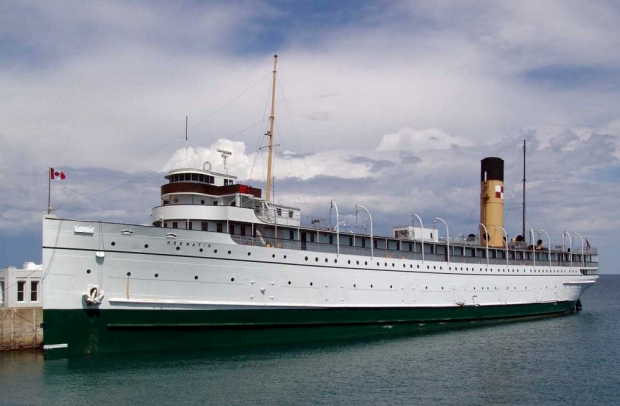 The SS Keewatin is the last Edwardian passenger steamship of its kind in the world. Five years older than the Titanic, it was one of just six ships owned by the Canadian Pacific Railway.

Built in Glasgow, Scotland, it was designed with comfort, class and beauty in mind. It was part of the Great Lakes steamship fleet and took its maiden voyage in September of 1907.

The liner used to sail between Port Arthur/Fort William (now Thunder Bay) on Lake Superior and Port McNicoll on Georgian Bay, transporting passengers and freight. The journey took two and a half days.

The ship was retired at Port McNicoll at the end of November in 1965. It was in danger of being scrapped until 1967, when RJ Peterson of Douglas, Michigan, purchased it. He towed the SS Keewatin to Lake Kalamazoo, established it as a maritime museum and cared for it lovingly for 45 years. In June of 2012, the ship was brought back to Port McNicoll, thanks to local developer Skyline Investments and the RJ and Diane Peterson Charity (Friends of Keewatin).

It is the last remaining Great Lakes passenger liner, representing a bygone era. It also demonstrates an attention to craftsmanship and opulence not likely to be seen again. All agree it is a wonderful piece of Canadian heritage and its legacy deserves to be honoured.

Skyline Investments, one of Ontario’s top players in hospitality properties with operations spanning North America, is fortunate to be able to share with the community such an important artifact of Canadian history. They are proud to play a role in its preservation and protection and to be able to honour its significance.

For several years, Skyline has actively searched for a long-term home for the notable ship. They wanted to ensure it would be cared for by an organization that was approved by the Department of Canadian Heritage.

For historic objects to be preserved for the long term, rigorous criteria must be met. They had to begin seeking potential applicants outside of the Port McNicoll area in order to meet these strict criteria.

Unfortunately, the RJ and Diane Peterson Charity did not qualify to receive the Keewatin as a donation from Skyline. In November of 2019, the charity's application to Heritage Canada was declined, with several deficiencies cited in its ability to preserve the ship. The Department of Canadian Heritage indicated that they were willing to receive a revised application, but at this time the Peterson charity has not responded to how they can overcome these issues.

In the interests of preserving the ship, Eric Conway, former President of the Peterson Charity, stepped in to provide an alternative solution. After contacting several organizations throughout the province, the Marine Museum of Great Lakes at Kingston indicated interest.

“The museum spent hundreds of hours over many months appraising the ship and devising a plan to best preserve and care for her for posterity,” said Chris West, the museum’s Chair.

Fortunately, the Marine Museum has years of experience as the steward of numerous important collections. They have a historic dry dock, which when emptied will allow the Keewatin to be stabilized, preserved and displayed in ideal conditions in perpetuity. They already have decades of experience conserving and curating the historic coast guard ship the Alexander Henry.

“We are keenly aware of the passionate attachment to the Keewatin in her home port,” said West. “We salute and hugely appreciate the extraordinary work of community volunteers who contributed so much to the ship’s care and display in Port McNicoll. Should we be fortunate enough to receive the Keewatin, they will not be forgotten. Rather, we will be reaching out to the RJ and Diane Peterson charity to honour them, to consult them, and to ensure their contributions to the heritage of the Keewatin are never forgotten.”

The most important objective is to ensure the ship’s long-term preservation. The Kingston Marine Museum and Skyline both recognize that many Port McNicoll citizens and volunteers would be sad to see such a defining piece of local history moved elsewhere. By donating the ship to a Department of Canadian Heritage-approved organization, it prevents the vessel from being scrapped or sold to a private buyer who may not appreciate its historical significance.

Numerous volunteers have contributed significant time and effort in Port McNicoll. Skyline is working with the Marine Museum to recognize them, should the Keewatin donation go through.

They ask that anyone with past involvement with the Keewatin register their names and contributions by sending their full contact details to keewatin@skylineinvestments.com. Please include a brief explanation of your contribution to the ship since it arrived back to Port McNicoll. Skyline will be in touch with each person registered regarding a recognition program.

Skyline and its management team thank everyone for their support and dedication in helping to preserve this wonderful piece of Canadian history.