Clean up efforts will continue for another four weeks, says a MTO spokesperson
Jan 21, 2019 8:02 PM By: GuelphToday Staff 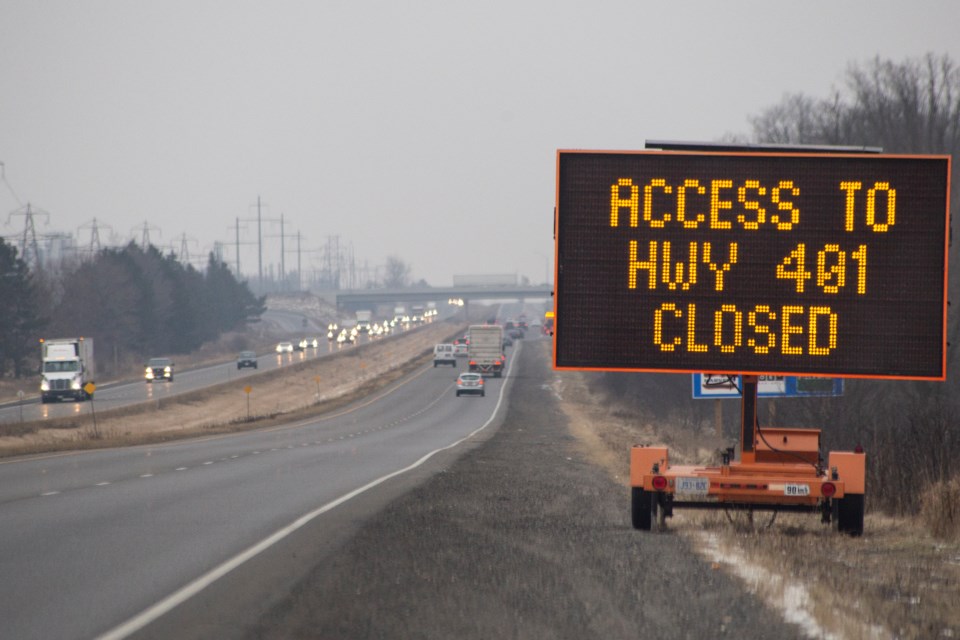 Clean up efforts on Highway 401 will continue for another four weeks, says the Ministry of Transportation. Kenneth Armstrong/GuelphToday

An effort to clean up the recent jet fuel spill on Highway 401 will continue for another four weeks, says a spokesperson for the Ministry of Transportation.

The spill is more extensive than originally thought, said Christina Martin, a spokesperson for the Ministry of Transportation (MTO).

The MTO has opened one of the two Highway 401 on-ramps at the end of the Hanlon Expressway. The westbound on-ramp is now open, while the eastbound on-ramp will remain closed while clean up efforts continue.

Drivers wishing to drive on the 401 eastbound toward Toronto are being detoured to the Brock Road on-ramp in Aberfoyle.

Lane restrictions that were in place on the 401 were lifted over the weekend to allow for winter maintenance operations to take place.

The clean up is being undertaken in accordance with environmental regulations, said Martin.

“We understand the impacts to traffic and are making every effort to complete the work as quickly as possible,” she said.

Mill Creek and Aberfoyle Creek became contaminated sometime after the rollover of a double tanker carrying between 40,000 and 50,000 litres of jet fuel occurred in the early morning hours on Jan. 13.

Freezing conditions have created ice on the creeks affected by the spill, said Gary Wheeler, a spokesperson for the Ministry of the Environment, Conservation and Parks.

Clean up crews are breaking through the ice for observation and for removing the fuel from the water’s surface, said Wheeler.

BEYOND LOCAL: Coronavirus misinformation is spreading — what is Canada doing about it?
Aug 8, 2020 9:25 AM

BEYOND LOCAL: The coronavirus exposes the perils of profit in seniors' housing, expert says
Aug 7, 2020 8:55 PM
Comments
We welcome your feedback and encourage you to share your thoughts. We ask that you be respectful of others and their points of view, refrain from personal attacks and stay on topic. To learn about our commenting policies and how we moderate, please read our Community Guidelines.