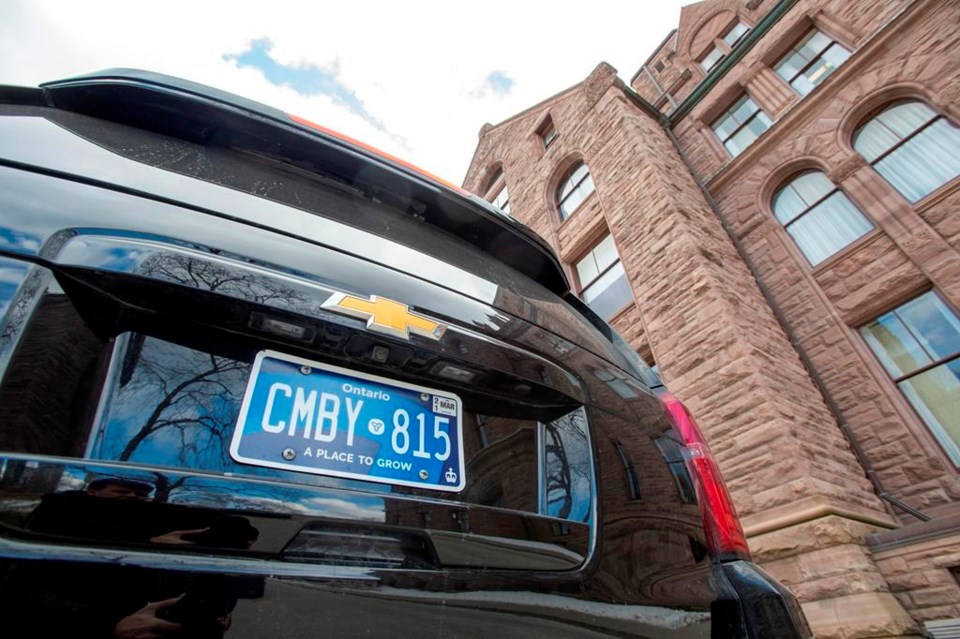 TORONTO — The latest model of Ontario's licence plates will need to be replaced once the manufacturer has fixed "a problem" that makes them difficult to read in the dark, the Progressive Conservative government said Thursday.

House leader Paul Calandra said the government is disappointed the defect appeared just weeks after the new model, manufactured by 3M Canada, was introduced. He said the government expects the company will foot the bill for the repair and replacement of the plates.

"Are the licence plates a problem? Absolutely," Calandra said. "We procured something from 3M, we expect them to fix the problem. We bought something and we want them to fix it."

In a statement Thursday afternoon, the government said 3M is currently working on a new "enhanced licence plate" which is expected to be available in less than three weeks. People who have already have the new plates will receive the enhanced version in the mail, the government said.

Approximately 49,000 of the new plates have been distributed to Ontarians, and an additional 134,000 are currently in Service Ontario locations, the government said.

"Ontarians will continue to receive the current plate, launched on February 1, through Service Ontario locations until an enhanced plate is available," Consumer Services Minister Lisa Thompson said in a statement. "We want to reassure Ontarians that the current plate does not pose a risk to public safety."

The problem was first raised over the weekend when an off-duty Kingston, Ont., police officer posted a picture of an unreadable plate in a well-lit parking lot at night.

A number of groups have expressed concerns about the impact the problem could have on public safety, including Mothers Against Drunk Driving Canada and the Ontario Association of Chiefs of Police.

The Progressive Conservatives revealed the new plates in the 2019 budget, saying the government spent $500,000 on a consultation on branding, but had a new contract for licence plate production that saved $4 million.

Opposition politicians criticized the Ford government for changing the plates to include a blue design like the Progressive Conservative party colours and an "Open for Business" tagline on commercial models, which echoed one of the premier's election slogans.

After initially defending the plates and insisting they had passed rigorous testing earlier this week, the Ford government backtracked Wednesday and acknowledged there was a problem with the new models.

3M Canada did not immediately reply to a request for comment Thursday, but had said earlier this week it had presented solutions to the problem.

NDP transportation critic Jennifer French pressed the government during debate Thursday, asking why the faulty plates ended up on the road in the first place and continue to be there.

"Safety should always be a priority, even in the face of exciting new vanity plates," she said. "Ontarians deserve to know how this happened, what is being done about it and when it will be fixed."

This report by The Canadian Press was first published Feb. 20, 2020.

LIVE: Premier Doug Ford provides latest COVID-19 update around 1 p.m.
Mar 30, 2020 12:30 PM
Comments
We welcome your feedback and encourage you to share your thoughts on this story. We ask that you be respectful of others and their points of view, refrain from personal attacks and stay on topic. To learn about our commenting policies and how we moderate, please read our Community Guidelines.