'COVID-19, unfortunately, is putting many things on hold, including a number of pressing issues. However, I recognize the reality,' says Barrie mayor
Apr 13, 2020 4:25 PM By: Raymond Bowe 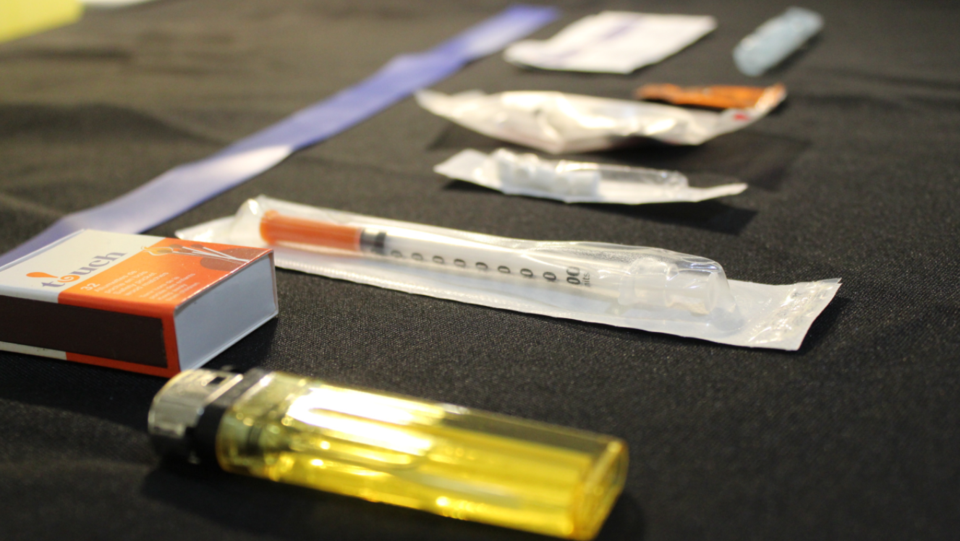 Several harm reduction tools were on display during a public drop-in session on March 20, 2019 at the Barrie City Hall Rotunda. Raymond Bowe/BarrieToday

Local public health officials have put their application for a proposed supervised consumption site (SCS) in Barrie on hold while they navigate through the COVID-19 pandemic.

Included in this week's council package was an email co-signed by Lynne Cheliak, director of community mental health and addictions services with the Canadian Mental Health Association (CMHA), and Dr. Lisa Simon, who's the associate medical officer of health with the Simcoe Muskoka District Health Unit. Those are the two primary organizations behind the application being developed to be sent to the province for final approval.

In the email, they update council members on the situation.

"It is with careful consideration between the applicant and co-applicant for a Barrie supervised consumption site that the work towards an SCS proposal for Barrie be placed on hold until further notice," they wrote.

In recent years, the Barrie area has had one of the worst drug problems in the province.

According to health unit statistics, however, the number of emergency-room (ER) visits for opioid poisoning at Simcoe-Muskoka hospitals has been down so far this year. There were 34 ER visits in January, down from 37 in January 2019, and 35 in February, which is a significant reduction from the 66 visits seen in February 2019. The data is considered "preliminary."

In early March, the health unit issued an alert saying there had been a "sustained increase" in emergency department visits due to drug overdoses in Orillia and Barrie.

Health officials believe an SCS in Barrie could help with the city's drug problem.

Supervised consumption sites provide a safe and clean space for people to use their own drugs under the care of nursing staff. An SCS can also connect drug users to doctors, treatment and other health and social services.

One of the potential locations that has been mentioned for an SCS was in downtown Barrie in space on Mulcaster Street. Health officials have said the location should be in area where the need is highest and most of the drug use occurs.

Barrie Mayor Jeff Lehman said he understands the current situation and the rationale behind putting the SCS application on the back burner for now.

"While the SCS is obviously hugely important, the risk to the community of COVID-19 has to be the top priority right now," Lehman told BarrieToday.

"COVID-19, unfortunately, is putting many things on hold, including a number of pressing issues," he added. "However, I recognize the reality."

The health unit and CMHA have been busy responding to the COVID-19 outbreak with the redeployment of staff and resources to address needs of the community.

"Unfortunately at this time, neither organization has the capacity to actively continue the work of this application process," Simon and Cheliak wrote in their email. "Please know that this was a difficult decision to be made and thoughtfully considered. We hope that our community understands our need to pause this work in order to address this evolving pandemic."

Lehman said one of the side effects of COVID-19 is that "many important health initiatives have had to take a back seat, which is one of my concerns as the situation continues."

In the meantime, people with addiction issues will continue to go without a facility such as a possible SCS in Barrie.

"The reality is, with the health-care (sector) switching over to fighting COVID with most/all of its capacity, and many service agencies having to curtail activities due to distancing requirements, we could see people suffering more severely from other health conditions," Lehman said.

"Fortunately, I think our local health-care system and first-responders are continuing to be able to respond to and treat most of those who need their help," the mayor added. "I’m hoping this continues as the crisis progresses, but it's why we are paying extra attention to what we’re hearing from first-responders and the organizations that continue to do outreach in Barrie."

There is no timeline for when the SCS application could be revisited.

Public-health officials expect work to resume "as soon as the situation permits."

Back in November, city police responded to some concerns raised by Coun. Sergio Morales the previous summer around a proposed injection site for downtown Barrie. The information from police included some of the pros and cons around having an SCS in the city.

This also isn't the first time the local application has been delayed. In September 2018, Minister of Health and Long-Term Care Christine Elliott called for more time to look into the issue around provincially approved overdose prevention sites across Ontario before allowing cities to operate such facilities.

Although SCS facilities are provincially approved, the Ontario government has sought input from municipal politicians.

In March 2019, the Ontario government approved 15 sites in areas deemed to have "the greatest need" for what the province calls Consumption and Treatment Services (CTS) after reviewing several applications. That included six sites in Toronto, three in Ottawa as well as one in each of London, Guelph, Hamilton, Kingston, St. Catharines and Thunder Bay.

Orillia snowbirds walk across border through 'loophole' after months in Mexico
May 7, 2021 2:45 PM
Comments