City shutting down; declaring an emergency is 'on the table'

'We are bringing the city to a virtual close,' says mayor, noting essential services will continue; Fire chief says he's 'very confident' in way decisions are being made
0
Mar 18, 2020 7:32 PM By: Dave Dawson 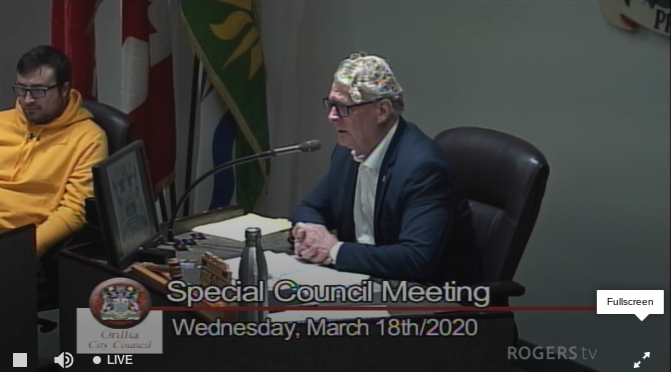 Orillia Mayor Steve Clarke presided over an emergency meeting of city council Wednesday to provide council with an update on the city's COVID-19 plan.

The City of Orillia is, essentially, shutting down as of tomorrow morning.

“We are bringing the city to a virtual close,” said Mayor Steve Clarke at an emergency city council meeting late Monday afternoon.

“It’s basically the shutting down of public access,” noted the mayor, who said essential services will continue in a move meant to protect staff and stop the spread of the coronavirus.

Orillia had its first confirmed case of the virus today.

The moves the municipality is making means the fire department will remain staffed and ready, along with the water and waste-water departments. Orillia Transit will continue and garbage collection will also continue. However, residents no longer will be able to access the city’s landfill.

While the city’s offices within the Orillia City Centre are closed to the public, there will be at least one staff member in each department to field calls and answer emailed questions during business hours; the city’s works department will be ready to handle any “weather event.”

This will be the new reality for the next two weeks — unless things change.

And Orillia Fire Chief Brent Thomas stressed that change is happening at an alarming rate as the global COVID-19 pandemic unfolds.

He said information is changing hourly and sometimes faster.

Thomas, who heads up the city’s emergency control group, said he, Clarke, senior city staff and other officials have been meeting multiple times each day this week to deal with the quickly evolving landscape.

Thomas stressed the city has consistently listened to and relied on regional and provincial health authorities as they made decisions in what has been a progressive strategy that has unfolded in a variety of stages.

And while declaring a state of emergency “is on the table,” Thomas said he doesn’t believe it’s necessary at this point.

“I’m very confident in the way we are making decisions now,” said Thomas. “I don’t think we’re at that point yet, in my opinion” to declare an emergency, said Thomas, noting Tiny Township and the County of Simcoe declared emergencies this week.

He said the city’s emergency control group has been able to navigate the crisis so far. That group includes most members of the city’s senior leadership team, “plus other appropriate city staff” as well as officials from Orillia Soldiers’ Memorial Hospital, Orillia Power, the Orillia OPP and others, as needed.

He said declaring an emergency triggers a protocol under the Emergency Management and Civil Protection Act that gives the municipality “special powers.”

Making such a declaration, Thomas said, would require extra staff, among other measures.

However, because the province has declared a state of emergency, he’s not sure how impactful it would be for Orillia to also make such a declaration.

“Because the province has declared an emergency … I’ll be frank and say I don’t know what that looks like because it’s never been done before,” said Thomas of potential financial incentives and assistance that might be available.

“To my knowledge, this has never happened in Ontario.”

Wednesday’s council meeting saw the mayor and five city councillors physically in the council chamber. They made sure they were at least a metre apart.

No members of the public were allowed to attend the meeting, but people were encouraged to watch the livestream on Rogers TV. Unfortunately, for much of the meeting, comments from those not in the chamber were not audible to the viewing public.

He said the city may need to continue to hold virtual emergency meetings as things evolve. For now, regular meetings of council have been postponed.

A couple of things have not been postponed, councillors learned.

The construction of Front Street will commence as planned. However, because provincial inspections are required — as early as April 1 — the work may have to be postponed.

Earlier this week, Jackson was at the centre of controversy when she was permitted to return to work at City Hall a day after returning from the Cayman Islands. She is now working from home.

For more on that, check back here tomorrow morning.

Orillia seeing 'definite increase' in people experiencing homelessness
Apr 9, 2020 1:45 PM
Comments
We welcome your feedback and encourage you to share your thoughts on this story. We ask that you be respectful of others and their points of view, refrain from personal attacks and stay on topic. To learn about our commenting policies and how we moderate, please read our Community Guidelines.