'It’s like Christmas every day' for local meat packers: Official

Leadbetter Foods is in a constant search for new workers; 'Even prior to COVID, the whole local food movement' had taken root
Jun 8, 2020 1:43 PM By: Marg. Bruineman 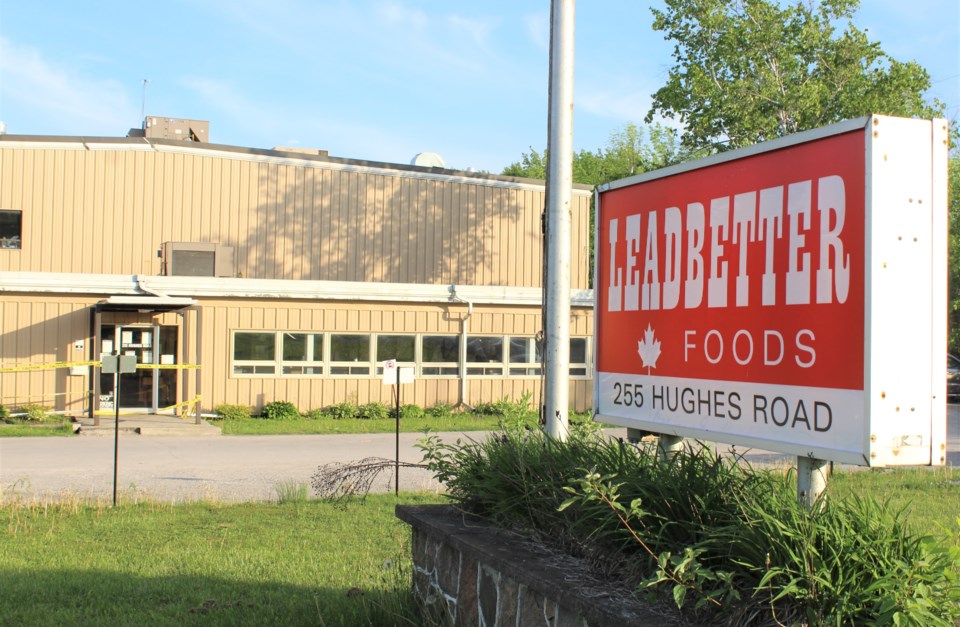 Leadbetter Foods in Orillia, which employs 250 people, continues to look for more workers - something that has been a constant since the COVID-19 pandemic began. Orillia Matters File Photo

Debbie Weedon can’t possibly accommodate any more animals into her abattoir’s butchering schedule this year. And if the demand continues, she expects she may well fill all of 2021 sometime soon and is starting to book for 2022.

“There have been major increases,” said Weedon, manager of Stayner Meat Packers and co-owner with eight other investors.

Just southwest of Stayner, the plant specializes in customized meats where its staff of 10 slaughters about 23 cattle every week and 50 pigs every other week. It also has a retail store selling a variety of locally grown meat and chicken as well as its own sausages and hamburger patties.

Across the country, meat packers and processors big and small, were busy before COVID-19 paralyzed much of the country. During the past two months since a state of emergency was declared and some businesses were forced to temporarily halt operations, the industry has been unable to meet the demand.

“Our guys have never been busier,” said Franco Naccarato, executive director of Meat & Poultry Ontario. “It’s like Christmas every day, day in, day out.

“Even prior to COVID, the whole local food movement has really helped local processors, to an extent, by highlighting the value of food and the connections to the people who make food.”

The organization representing meat processors, abattoirs and grocery stores, including the independent grocers and butchers, is seeing a distinct shift in business, much of it attributed to the fallout of COVID-19.

With many restaurants closing, the industry had to reorganize its distribution network and determine where the food would go. And when customers began flocking to and lining up at large grocery stores, many shoppers turned to the smaller, independent shops and sellers.

“Retail has been extremely busy, people coming in looking for more local (products),” said Weedon in Stayner. “I think they like the idea of a small establishment and not a lot of hands handling everything.

“But we are crazy busy with the custom slaughter side, booked more than we’ve ever been.”

Stayner Meats deals with the local small farmer or hobby farmer who may have just a couple of acres with a couple of cows they bring to market every year as well as the big feed lot beef farmers.

Many, she said, are now seeing more customers coming to them for meat as the demand to buy local increases and they’re working harder to meet that demand.

Her customer base has also widened as some abattoirs close or turn away business.

The news is good all around for a business that typically sees slow periods where there may not be enough work for everyone. Now, all 10 employees know they’ve got steady work right into 2021 with prospects of the same for the following year.

“Families need to know they have a regular job, a full-time job,” said Weedon. “When you’re booking so far in advance, the staff knows that their work is stable.”

But the pandemic has also highlighted negative aspects of our food supply system.

Although many processors have increased their capacity, they’re still having trouble keeping up, creating a bottleneck which is hurting farmers and their bottom line and could threaten the viability of some.

Prior to Ontario declaring a health emergency, processing capacity had long been identified as an issue.

Naccarato’s organization has been lobbying the government for attention. He says the industry has relied upon too few to feed too many.

He described the sector’s infrastructure as old and dated and desperately in need of updating and renewal.

Abattoirs, the smaller slaughterhouses like Stayner Meats, which often have storefronts through which the food is sold, have been decreasing dramatically in numbers.

There are now 54 per cent fewer abattoirs in the province than there were in 1999. Part of the reason, said Naccarato, is the lack of succession planning.

And while Ontario has 123 provincially inspected processing plants, the large processors account for a big chunk of the work, and as a result of consolidation, there are only a handful of them. So if business at one of them is interrupted, the entire food chain is disrupted.

Processing plants have also had trouble keeping staff, reporting employee vacancies in the area of 13 per cent when three or four per cent is considered the norm. In Orillia, Leadbetter Foods Inc. which employs 250 people, has been advertising for more workers throughout the pandemic to meet demand.

“It’s always traditionally been a challenge in our sector, but more so in the last four or five years,” said Naccarato.

He attributes that largely to the lack of post-secondary training. This fall, Fanshawe College is introducing the first certificate course related to the sector. But Naccarato thinks more can be done.

“We could produce a lot more if we had the right training and skills,” he said, thinking about the possibility of incorporating technology, innovation and the Internet of Things to update the industry.“It can attract a lot more people and more higher skilled jobs in the sector if we start modernizing it.

“And we think an investment in an innovation and training centre in the province would be key to singling out the opportunities that there are in the sector” by training existing staff and future generations, he said. “We need to train 1,000 people per year for the next 10 years so we can catch up” and make up for an aging workforce, and replace workers.

Roots North Revisited concert finds new stage, new life at drive-in
Jul 14, 2020 11:30 AM
Comments
We welcome your feedback and encourage you to share your thoughts. We ask that you be respectful of others and their points of view, refrain from personal attacks and stay on topic. To learn about our commenting policies and how we moderate, please read our Community Guidelines.