The city issued 183 parking tickets last weekend; 'The city noticed a significant improvement throughout all of our waterfront parks this past weekend'
Jul 29, 2020 12:30 PM By: Dave Dawson 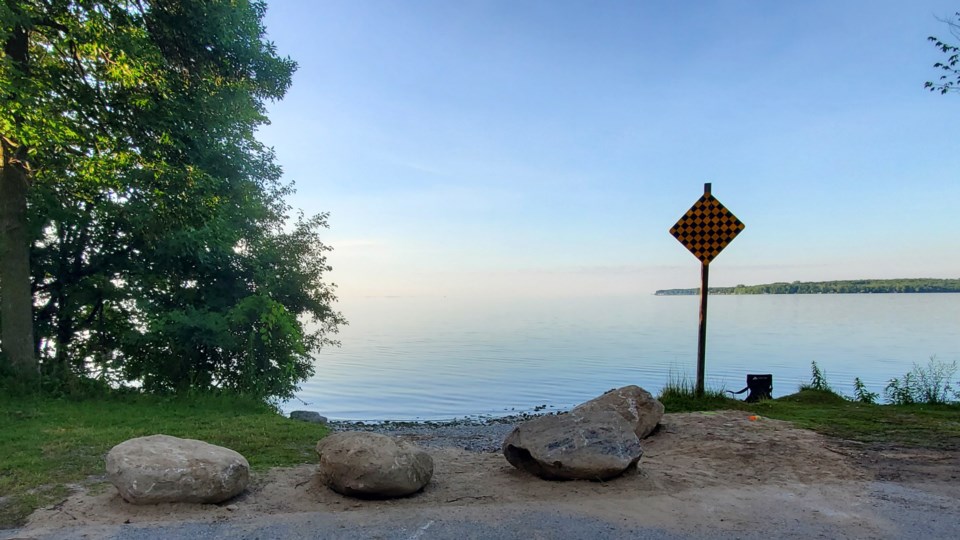 Boulders were put in place at the foot of West Street late last week in an attempt to stop people from using the area as a free boat launch. Contributed photo

The city’s continued efforts to limit the number of people visiting local parks and beaches seems to be paying dividends.

After out-of-town visitors got creative by parking on the side of the highway and shoe-horning their vehicles into empty private lots on the July 18-19 weekend, the city’s emergency management committee (EMC) decided to attempt some new measures.

In addition, large boulders were strategically placed at the foot of West Street, adjacent to Kitchener Park, to thwart people from using that as a free boat launch.

Similarly, rocks were placed at the “entrances” of the private lots across from Tudhope Park and Couchiching Beach Park (at Bay Street) to dissuade people from attempting to access those lots, where parking is prohibited.

“The mitigation measures of the areas of concern were effective,” says Jennifer Ruff, the city’s director of communications and business development.

“The city noticed a significant improvement throughout all of our waterfront parks this past weekend.”

Despite that and despite the proliferation of signs spelling out the temporary parking restrictions in place for out-of-town visitors, evidently many people are still not getting the message.

From Thursday through Sunday last week, the city issued 183 tickets to people who violated the rules.

That is substantially higher than the 80 tickets issued the previous weekend. On the first weekend of the crackdown, the city took an education-first approach, but issued 53 tickets.

To date, the city has not towed any illegally parked vehicles - something that has been threatened.

No tickets were issued last weekend for illegal cooking in the parks or for gatherings that violated the provincial pandemic health guidelines.

Ruff says the city’s bylaw officers will be out in full force this weekend - the Civic Holiday Weekend.

“We are also ensuring Waterfront Parking Program staff are in place to work the Civic Holiday Monday as the parking and boat launch restrictions are in effect on holiday Mondays,” said Ruff.

She noted staff will also be erecting signs in a few additional areas near the Couchiching Beach Park as ‘residents only' parking.

“Based on lower demand, we are closing down the Greenhouse permit location at Couchiching Beach Park and centralizing where residents can get permits in-person at the Orillia Waterfront Centre,” said Ruff.

The in-person location for Tudhope Park remains open at the Kids for Turtles building. These locations are open from Thursdays through Sundays (and Holiday Mondays) from 7 a.m. until 7 p.m. , which mirror the times when visitors must pay for parking and launching their boats at civic boat launches.

Earlier this summer, in an attempt to curb the number of visitors packing local beaches, city council voted to charge out-of-town residents $50 to park in beach lots and $50 to launch their boats on summer weekends.

Those who violate the rules face a $100 fine. The program is in place until mid-September.

“We have been successful in keeping our incidence rate down,” said Gardner. “Municipalities have been working hard … to come up with various ways to control numbers and encourage people to space out.”

Charging extra for parking for those visiting from outside the municipality lines up with that objective, according to the doctor.

“These are the ways they are seeking to achieve that public health goal,” Gardner said. “They are consistent with what we’ve been recommending.”

--With files from Erika Engel