A little finger prick could save your life

National HIV Testing Day will be celebrated in region for the first time on June 27; 'We want people to know it's not a death sentence any longer'
Jun 3, 2019 9:15 AM By: Jessica Owen 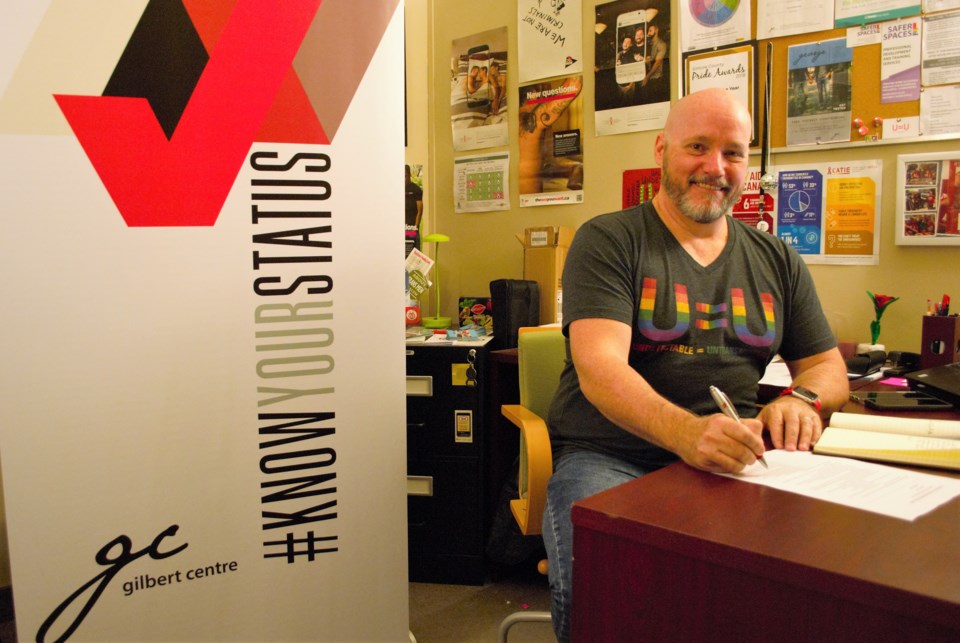 Randy Davis, the gay men’s sexual health co-ordinator at The Gilbert Centre, is gearing up for National HIV Testing Day which is taking place June 27 in Barrie. Jessica Owen/BarrieToday

Regular human immunodeficiency virus (HIV) testing is a cause Randy Davis cares about.

Davis, the gay men’s sexual health co-ordinator at the Gilbert Centre, is one of the organizers of the first ever National HIV Testing Day being celebrated in Barrie on June 27.

But another reason Davis cares so much about regular testing is because he is living with HIV.

“We’re not a threat or a risk to anyone. We’re living in your community,” he said. “I’m a prime example. I’m much healthier now than I was five years ago when I was diagnosed.”

Davis sees his specialist every three to four months and is still tested regularly for the virus.

“It’s all about awareness. This is the first event of its kind in Barrie, to recognize the importance of getting tested," said Davis.

"We’re not as concerned about the exact number of people who walk into the tent to get tested. I’m more about raising awareness about what it means to live with HIV in 2019 and redefining that for people,” he said.

Davis, along with other people living with HIV, will be on hand at the event to answer questions and share experiences with anyone who has questions.

The Simcoe Muskoka District Health Unit will be providing free testing on the spot. There will also be a flagraising, proclamation and live entertainment.

“We’ll be having local celebrities that will be getting tested, to reduce the stigma around getting tested, while showing solidarity with people living with HIV,” said Davis, adding that when Prince Harry and Rihanna were tested in the U.K., it did a lot for the cause.

There will also be a U=U ambassador present.

The U=U movement aims to dispel myths around transmission of HIV. U=U stands for Undetectable = Untransmittable, meaning that someone with an undetectable HIV viral load cannot transmit HIV, even without using condoms.

“There are dangerous myths out there,” said Davis. “When people think of HIV and AIDS, they think of movies like Philadelphia; emaciated gay men in hospital beds with lesions on their skin. That’s just not the case any longer.”

While Davis says there are still people who die every day from AIDS-related illness, the diagnosis is no longer as grim as it was in the past.

“The science is very clear. If we’re able to get folks who are diagnosed on treatment right away, they will become undetectable within three to six months, making it impossible for them to transmit the virus,” he said.

Getting people tested is the first major step, as Davis says between 14 and 20 per cent of people who are HIV positive don’t know it.

“We want people to know, it’s not a death sentence any longer,” he said.

In regards to new breakthroughs in the science of HIV management, Davis says that taking a pill everyday could soon become getting a monthly injection.

“It’s just as effective as taking daily medication. There are studies happening right now where they’re looking at an injection once every two months. Maybe, down the road, a once-a-year injection,” he said. “Even with a detectable viral load, you’re still not dangerous to most folks. HIV is not an easy illness to get.”

According to the Canadian AIDS Society, HIV Testing Day was created in response to the rising HIV rates being seen in Canada. According to the Public Health Agency of Canada’s 2017 HIV Surveillance Report, there has been a 17.1 per cent increase in the number of new HIV infections in Canada between 2014 and 2017.

For more information on living with HIV, click here.

Quick facts on HIV in Canada