Business is blooming as people flock to local garden centres

'People are stuck at home and are trying to find ways to spruce up their surroundings in order to cheer themselves up,' says owner of Scott's Garden Centre
May 6, 2021 1:45 PM By: Tyler Evans 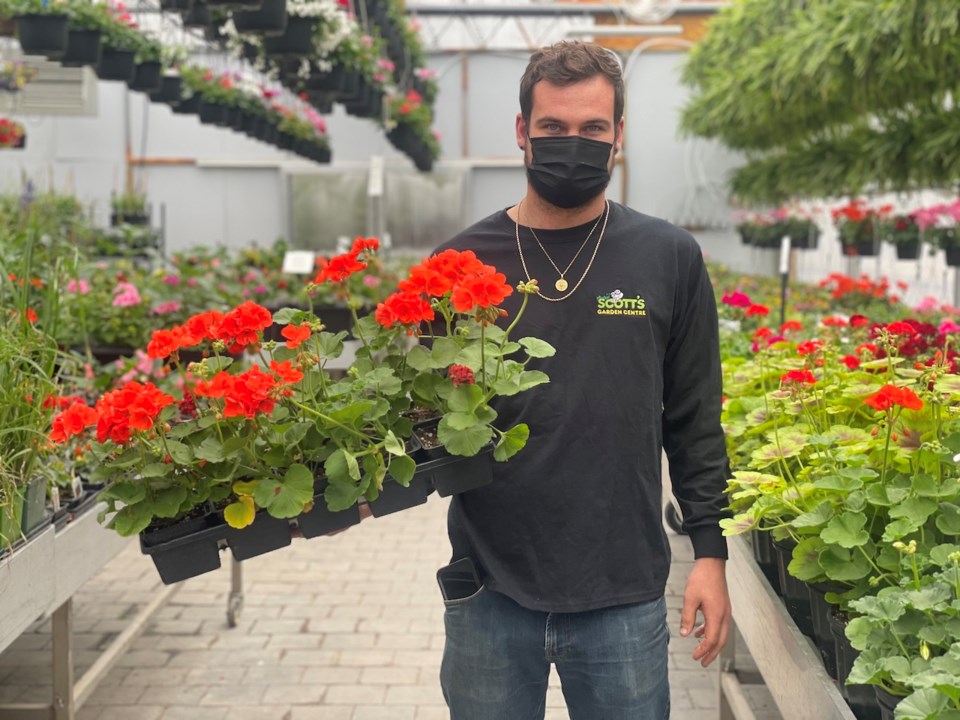 Local garden centres have been a hot spot for those looking for a hobby during the stay-at-home order this spring.

Bob Wink, owner of Windmill Garden Centre on Highway 11 in Oro-Medonte, says his business has experienced a busier than normal start to the gardening season.

“We are so fortunate to be open even though we are only at 25 percent of our capacity (due to provincial regulations). It’s way more advantageous than doing curbside pick-up,” Wink said.

“We’ve had a huge increase in sales for both our garden centre and landscaping. We are very fortunate to be one of the sectors who is doing well in the pandemic, and we are certainly feeling for the businesses who are being affected by the closures.”

Wink says the size of the Windmill Garden Centre allows him to keep people safe during their shopping experience.

“We have lots of space for people to do their shopping without being worried about being too close to people,” he said.

“It’s very safe, it’s open fresh air, and we are very fortunate for that.”

Wink says customers are after all sorts of different items.

“A lot of people are doing their own gardening work, people are putting in evergreens, perennials, and they are even looking for annuals, even though it’s a little early for that still,” he said.

He warns customers about possible spring frost putting a damper on their planting season.

“We have customers who are watching the weather diligently and if the weather is cooling down they are protecting their plants, but May 24 is usually our frost-free date for our area,” he said.

Wink says the record demand at his garden centre is proof that more people are turning to gardening than ever before.

“People aren’t travelling right now, so instead they are staying at home, looking at their properties, and saying ‘let’s make some changes', which is driving sales and demand up,” he explained.

Wink expects business to be busy ahead of this weekend in preparation for Mother’s Day.

“People can come by and grab a hanging basket or a plant for mom, adding colour to the yard is always nice for Mother’s Day,” he said.

Over at Ego’s Garden Centre on Horseshoe Valley Road in Coldwater, owner Kristen Ego has also been busy trying to keep up with high demand.

“People are finishing projects at home, people have finished decorating and redecorating every room in the house now, so they are starting to go outdoors again now that the weather is a little nicer,” Ego said.

“I think a lot of it is a double play on people having more time and it’s an activity that can be done safely outside or even indoors. Over the past year, we’ve seen more people becoming interesting in growing more house plants.”

Like many other industries, the gardening industry is seeing supply shortages, Ego says.

“We grow a lot of plants ourselves, so we are able to continue that supply, but with things we need to buy in, we are seeing major supply shortages,” she said.

“There are certain things that are still challenging for us; pots and containers for example have caused a lot of hold-ups in our growing system because we aren’t able to get some of our supplies on time for when we are timing our crops.”

With Mother’s Day coming up this weekend Ego’s has seen a nice uptick in gift certificates sales.

“We’ve been mailing out gift certificates for those who don’t want to be coming out right now, that’s been a really popular option this year,” Ego said.

"It’s something people can do to pay it forward and we are really grateful for that support as well.”

The most popular items at Ego’s so far this year have been edible gardening items.

“A lot of people are putting in small, raised gardens to grow a few of their own staples, that’s something we saw a big increase in last year, and it’s continuing again this year,” Ego said.

Over at Scott’s Garden Centre at 254 Coldwater Rd. W., owner Alex Scott says his garden centre has been even busier than it was last year when they were first allowed when restrictions eased shortly after Mother’s Day weekend.

“I’m surprised with how many people are buying early this year, but I don’t blame them because last year we were almost sold out of stock by the end of May,” Scott said.

“We don’t want people to be disappointed with the stock we have, so they should come early and buy what they need and take advantage that we are still open for in-store shopping, as last year we did have to disappoint people with not being able to fill some orders."

Scott says the garden centre has grown more items this year in anticipation of high demand, but he says it's hard to predict demand.

“Whether it’s vegetable gardening or other plants, people are stuck at home and are trying to find ways to spruce up their surroundings in order to cheer themselves up,” he said.

So far, the most popular items at Scott’s this year have been tropical plants and house plants.

“I think people are so avid about getting what’s new and what’s in, and I find that the social media outlets are driving people to be a little trendier, I think that’s where it stems from,” Scott said.

Scott also believes bright and colourful plants are in high demand right now as people want to brighten their workspaces and homes during the dark and gloomy pandemic.

“Having to stay home 24/7 is making people want to spruce up the home office by adding a few tropical plants. We can’t seem to keep those on the shelves for too long, and we are getting weekly shipments in,” Scott said.

Scott says that the gardening industry has blossomed amid the pandemic.

“We truly feel for the businesses who aren’t open right now. I think this is a dark time for everyone in some ways,” he said.

“But we are fortunate and thankful to be open and have a lot of support from the customers in our community.”