15 carvers will create unique works over the weekend that will be put up for auction Sunday
Mar 15, 2018 8:00 AM By: Dave Dawson 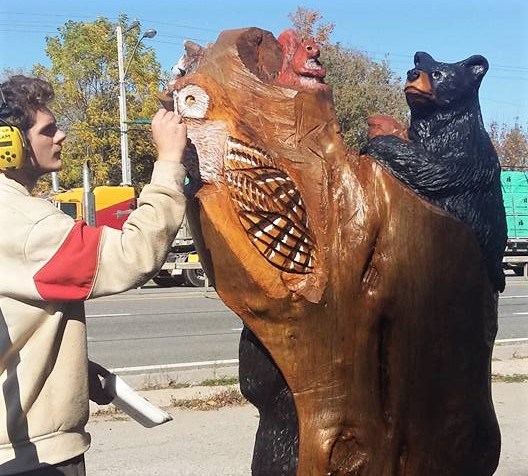 Cam Menken is shown working on a carving. He is one of 15 carvers who will be working all weekend at the first annual Washago Carving Event being held at Centennial Park. Supplied photo

Armed with chainsaws, 15 talented carvers, each with their own flair and distinctive style, will show what they are capable of this weekend at the first annual Washago Carving Event.

“We will have 15 carvers and each of them will bring 15 to 20 pieces of their work, so there will be more than 300 unique carvings to look at, to haggle over and to buy,” said organizer John Kerr of the event that will happen at Centennial Park in Washago.

Kerr is the owner of Back Yard Stuff, a long-time Highway 11 store that sells hand-crafted carvings from multiple craftsmen. He often brings carvers to his store for events, but thought a larger, community event was needed.

“I think it will provide a nice shot in the arm in the spring,” said Kerr. “It’s a good time, it’s fun and it’s something different.”

Kerr said the carvers will each carve out their own space in the park, set up their wares and then get to work carving something special over the weekend. The three-day event will conclude Sunday with an auction of the work created by the carvers during the weekend.

Among the carvers showcasing their work are well-known and popular craftsmen like Jim Menken and his son, Cam Menken. “Their carvings are incredible,” said Kerr. “They are very well known and will bring lots of stock to look at.”

Ted Williams will also participate in the weekend event. The longtime Rama First Nation councillor has been carving for many years and is well known for his bears.

There is no admission fee for the inaugural event which will have a festive atmosphere. Kerr said a variety of food vendors will be on hand selling everything from hamburgers and pulled pork, to old-fashioned fudge, butter tarts, specialty coffee and other items.

Proceeds from the event will aid a “mobi-mat” for Centennial Park which will allow better access to the beach for the elderly, parents with strollers and those in wheelchairs.

Kerr said he hopes visitors enjoy this first event, because he sees it as the beginning of something bigger. “We plan to have two events next year: One in March and one in September. Next year, we hope to have 30 or 35 carvers.”

He said carvers are part of a tight-knit fraternity. “If the carvers like it – and they will – they will talk amongst themselves and this will grow,” said Kerr. “That’s what we’re hoping for.”

The event begins Friday morning at 9 a.m. and runs all weekend. For more information, Kerr can be reached, via email, at back-yard-stuff@hotmail.com