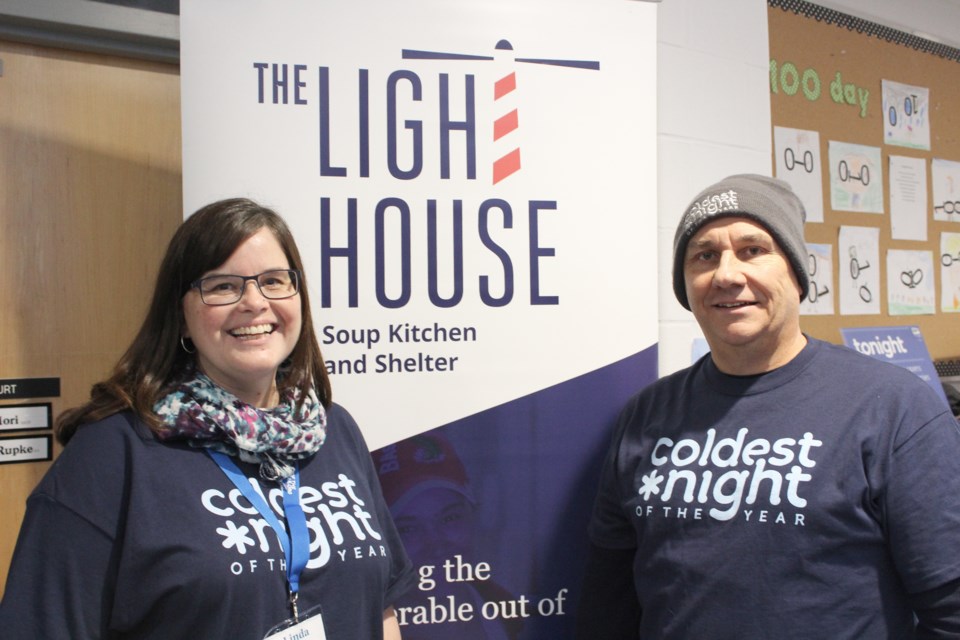 Linda Goodall, executive director of the Lighthouse Soup Kitchen and Shelter, is pictured with board chair Glenn Wagner. Both were on hand Monday night, alongside other project supporters, and celebrated council's support of Building Hope. Nathan Taylor/OrilliaMatters

The Building Hope project is one step closer to reality this morning.

At Monday night’s city council committee meeting, councillors voted unanimously to forgive the $390,000 loan the municipal government provided to The Lighthouse Christian Ministries, so the agency can, with its partners, create 20 supportive housing units as part of its ambitious multi-phase facility on Queen Street.

“(This is a) fantastic step,” said Building Hope chair Glenn Wagner, moments after council committee made their decision. “I think, so far, (it’s) the most exciting milestone that we’ve had to date … to know, finally, we’re going to get a shovel in the ground.”

The cost of the 20-unit supportive housing project, to be constructed at the 75 Queen Street property the local group purchased last year, is $3.6 million. The county is providing $2.7 million through Home for Good provincial funding and is also providing a forgivable loan of up to $510,000 in addition to annual operating funding. That meant Building Hope officials had to come up with the balance: $390,000.

With the city’s “generous” decision Monday night, Lighthouse officials can now ante up their portion of the cost, paving the way for the project to begin, likely later this year.

“We have already got an architect hired and working on plans for the supportive units, so it’s going to allow us to start construction as soon as we can get a site plan developed,” said Wagner, who hopes this means there will be a “shovel in the ground late this summer or early fall.”

The supportive housing units are just one element of the Building Hope vision. In addition, officials plan to build a community service hub that would include 40 emergency shelter beds for men, women and youth, a soup kitchen and safe beds in addition to supports for shelter clients and those in the supportive housing component. Later, they hope to build affordable housing units on the property as well.

“Homelessness is a sad and challenging issue in Orillia as it is in other communities in Ontario,” said Emond. “I believe the community has a responsibility to provide assistance. Lighthouse Ministries has been at the leading edge of assistance for homeless men for some time (and) Building Hope is an extension of that assistance and they are to be commended for their three-phase plan.”

But in light of the “emerging crisis” at Orillia’s Soldiers’ Memorial Hospital (OSMH), coupled with the need for a residential hospice in Orillia and recognizing the need for all levels of government to work together to combat the complex issues, Emond said he is a “reluctant supporter” of the local initiative.

That is “based on the fact that we are not considering this request in the broader context of social housing needs in Orillia and the financial impact of these needs on the taxpayer,” said Emond.

He said the growing number of alternative level of care (ALC) patients at OSMH is worrisome. These are patients who no longer require acute care or need the services of the hospital, but remain in the hospital because they have no place to go. “This is costing OSMH millions of dollars each year,” Emond said. He also noted there “are 25 to 30 beds at the hospital occupied by ALC patients and no beds for those who require critical care and who have to wait up to three days on gurneys in the emergency department.”

Other councillors expressed some frustration that the units in the new supportive housing project could be occupied by people from outside Orillia. But Wagner noted a service delivery team, comprised of community members, will have well-developed criteria that is used as part of a comprehensive intake process.

“The idea is to help those who need help and this will very much enable us to do that,” said Wagner. “Our mandate is to serve and we want to serve people that are in need and if that person is from Orillia, fantastic. If that person is from Simcoe Count or Vaughan, we’ll serve them as well. I’d hate for us to stipulate that because someone is from (a certain place) if we have a room available that we would turn them away. That is not at all what our mandate and our calling is.”

In addition to the loan forgiveness, the city will provide a municipal tax exemption for the new facility – if it doesn’t qualify for tax-free status by the Municipal Property Assessment Corporation (MPAC). However, it’s expected the new project will qualify as MPAC exempted similar local facilities, such as the Green Haven Shelter for Women.

Building Hope officials also asked the city to waive or defer development charges on the project. Council agreed to defer the charges for two years, but will charge the group a 4.25% annual interest rate.

“We celebrate, say ‘Yahoo!’ but until those t’s are crossed and those i’s are dotted for sure, we’re going to be somewhat subdued,” said Wagner. “Although we’re very excited at the same time.”

While Wagner hopes construction of the supporting housing units can begin this summer, work will continue, simultaneously, on a campaign to raise $6 million for the new community services hub. The hope is that facility would be built in 2020.

Ontario reports 130 new cases of COVID-19 today
Jul 11, 2020 10:44 AM
Comments
We welcome your feedback and encourage you to share your thoughts. We ask that you be respectful of others and their points of view, refrain from personal attacks and stay on topic. To learn about our commenting policies and how we moderate, please read our Community Guidelines.