County in 'good position' to meet challenge of aging population 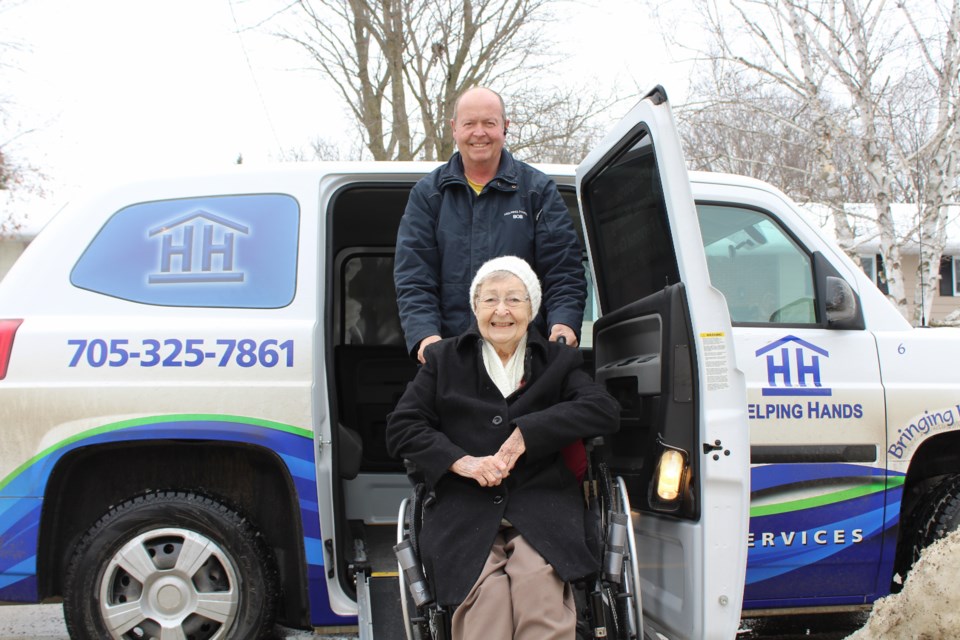 Helping Hands Orillia driver Bob Townes helps client Betty Leigh into his vehicle. Transportation has been identified as a priority in the County of Simcoe's Positive Aging Strategy. Nathan Taylor/OrilliaMatters

The County of Simcoe has acknowledged services for its aging population can be improved, and local groups that cater to senior citizens agree.

Knowing the region’s aging population is set to double over the next 20 years, the county has been working on a Positive Aging Strategy.

This week, it released its framework for the plan, identifying priorities for making life easier for seniors in the county.

At the top of the list: communication and information.

A decline in print media in the region poses challenges for seniors, said Jane Sinclair, the county’s general manager of health and emergency services, who noted digital communication and media “really is the way of the future.”

“If they don’t know how to even work a computer, that’s a challenge,” she said.

One potential way to help is by having younger folks help seniors learn how to use a computer and navigate the internet. A similar program was in place in Collingwood and “was very helpful,” Sinclair said.

Edith Williston is well aware of the gap that exists in communicating with seniors.

“It comes up at every general meeting: How are we going to get the word out about our events?” said the president of the TIE Club, a seniors group in Orillia.

She said most seniors at the TIE Club do not use the internet.

“We desperately miss the Packet,” she said of the city’s former daily newspaper, which, before being closed in November, published the club’s events weekly.

One option is to call 211, a free helpline that provides information on community services and supports. Of the more than 3,000 completed surveys the county received during its consultation on the Positive Aging Strategy, “a really small percentage knew 211 existed,” Sinclair said.

“It’s the best-kept secret. It’s a wealth of information.”

Seniors should not be swept aside by the digital revolution, said Terri Soukup, vice-president of client services with Helping Hands Orillia.

“Our generation wants to go paperless. We’re into computers. The aging population — we’re trying to force them into the younger generation’s behaviours,” she said. “It’s hard to get information to clients, and that leads to some of their social isolation.”

A lack of transportation options can have the same effect, she added, and that is another area the county has identified as a priority.

Helping Hands, as described on its website, is “providing transportation services, assisting with meals, providing personal care or relief for a caregiver, housekeeping or a friendly visit.”

“Transportation is not going to be solved by adding more vehicles and more drivers,” Soukup said.

What it will take is more co-operation among service providers — something Helping Hands and the county have been working on for a few years, since launching the CT Link. It allows different groups in the county to post their availability on a portal and help each other with clients’ transportation needs. Participating services are Helping Hands (Orillia), Red Cross (Barrie and Muskoka), Barrie Area Native Advisory Circle (Barrie) and Community Reach (Midland).

There are plans to expand that service, and the additional help will benefit the busy agencies that are involved.

While Helping Hands has a philosophy of not turning clients away or putting them on a wait list, it is “constantly at capacity,” Soukup said. Its staff and volunteer drivers made 33,255 trips last year. That figure is expected to increase to between 36,000 and 38,000 this year.

“With more seniors, it’s harder and harder to keep up with the needs around transportation,” Sinclair said.

The county’s focus on transportation goes beyond municipal transit, she added. A lack of accessibility is often a barrier.

There are ways public transit can be more available to seniors and others, said Williston.

“The buses don’t usually run on holidays,” she said. “Seniors are on fixed incomes and to take cabs, it gets quite expensive.”

Affordability is an area of concern highlighted by the county that spans all of the priorities identified in the latest report, but it factors prominently into housing.

Helping Hands offers transitional beds in Orillia, Brechin and Coldwater, with the Orillia and Coldwater sites being assisted-living facilities, providing more than just a roof over the clients’ heads.

“The wait list for affordable housing is quite long,” Soukup said.

Even if seniors get to the top of that list, the accommodation might not be what they need. A lot of the housing is geared to income, not necessarily geared to seniors, Soukup said, noting there are often accessibility issues.

More assisted-living accommodations are being planned in Barrie, but that still won’t solve the problem.

“That will help, but they tend to go to urban areas,” Soukup said. “We’re trying to move them to areas of convenience versus allowing people to stay where their supports are.”

The county feels it is well prepared for the ongoing challenges.

“We’re in a really good position right now because the wave is coming and we’re already getting strategies in place,” Sinclair said. “If we weren’t engaged at this point, I would have a much greater sense of urgency.”

In addition to the thousands of surveys, the county hosted 16 focus groups and eight public consultations and conducted phone interviews. It received a provincial grant to start the process, and Sinclair has learned more funding will become available. As soon as it does, the county will apply for some of that cash.

Staff will report to county council on the plan’s progress annually for the next five years.

Orillia mayor warns of increased restrictions, enforcement
Apr 1, 2020 7:15 PM
Comments
We welcome your feedback and encourage you to share your thoughts on this story. We ask that you be respectful of others and their points of view, refrain from personal attacks and stay on topic. To learn about our commenting policies and how we moderate, please read our Community Guidelines.