Cuddle Cot would have given family more time with stillborn son

'I want to help other grieving parents get more time with their babies,' Aimee Stephens says
Feb 4, 2019 11:45 AM By: Nathan Taylor 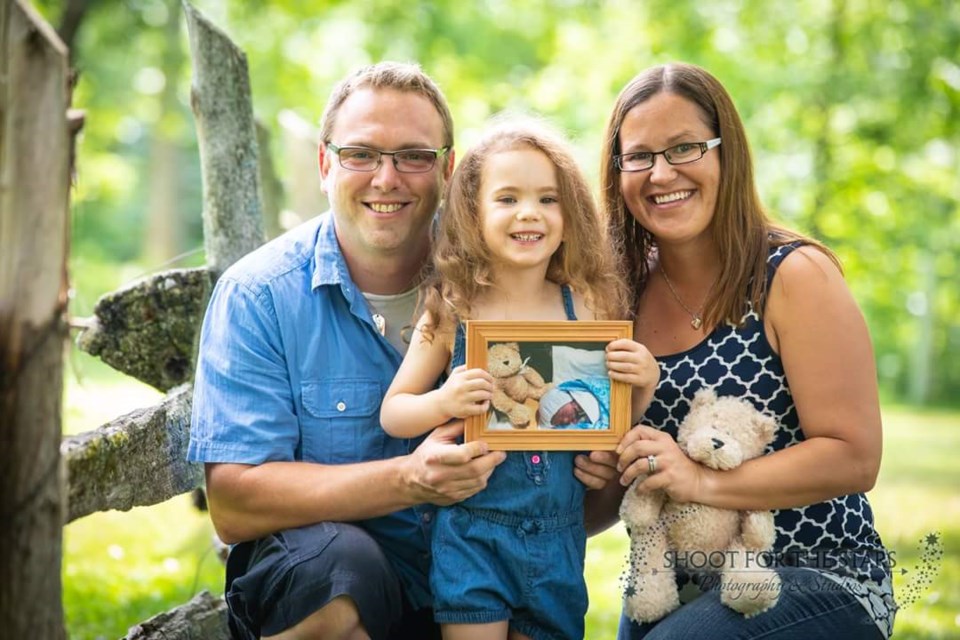 Richard and Aimee Stephens are shown with their daughter, Madelyn, and a photo of their son, Dylan, who was delivered stillborn in January 2018. Supplied photo

Aimee Stephens didn’t have enough time with her son.

Dylan arrived Jan. 29, 2018, two months before the due date. Stephens was at work that day when she passed out and was taken to Orillia Soldiers’ Memorial Hospital (OSMH).

An ultrasound showed Dylan’s heart was not beating.

“We just finished the nursery that weekend. It came out of nowhere,” Stephens said. “Babies aren’t supposed to die.”

She had an emergency C-section and required six blood transfusions after Dylan died due to a placental abruption.

The few times she and husband Richard got to see their son, the changes in his appearance just added to their heartache. They watched as Dylan’s skin and lips changed colour, and they knew they had little time left with him.

It wasn’t until a couple of months later that Stephens learned about Cuddle Cots. They include a cooling system to preserve stillborn babies.

“When I had Dylan in Orillia, the Cuddle Cot would have given us more time with him. The deterioration of the body wouldn’t have happened so fast,” Stephens said.

“That’s the only time I had with him. When you leave the hospital, you leave empty-handed," she said. "If I could have had three days with him, I would have spent every minute with him. He would never have left our side.”

Last month, Stephens started a Facebook page called Dylan’s Light and she created a GoFundMe account to raise money to purchase a Cuddle Cot for OSMH. They cost about $5,000.

“I want to help other grieving parents get more time with their babies,” she said.

She and Katie Pereira are working together to raise the money for a Cuddle Cot. Pereira, who gave birth to a stillborn son in September, led a fundraiser to get a Cuddle Cot for Collingwood General and Marine Hospital. After the money was collected for that purchase, she wanted to continue helping grieving parents. Stephens learned of Pereira’s efforts and the two joined forces. Learn more about Pereira’s story here.

Since Stephens shared her story, the response has been “overwhelming,”

It was important to talk about her experience not only to help others, but to keep Dylan’s memory alive.

“I’m very happy that his name is out there and people know about Dylan. That’s one of the biggest fears, that their baby will be forgotten,” she said.

She and Richard and their four-year-old daughter, Madelyn, are making sure Dylan is never forgotten.

“We try to include him in everything we do,” Stephens said. “If we go away for more than one night, I usually take a photo of him with me.”

Stephens lives in Barrie, but she was working in Orillia when she gave birth. Barrie’s hospital already has a Cuddle Cot. It was important for Stephens to try to get one for OSMH.

“They saved my life, so I’m very grateful for what they did for me,” she said.

She is also going to hold an online auction from Feb. 18 to 24. Keep an eye on the Dylan’s Light Facebook page for more information.

Six-step plan will help you combat 'bad boys' of invasive species
Jul 5, 2020 11:30 AM
Comments
We welcome your feedback and encourage you to share your thoughts. We ask that you be respectful of others and their points of view, refrain from personal attacks and stay on topic. To learn about our commenting policies and how we moderate, please read our Community Guidelines.